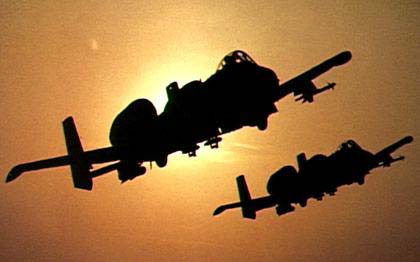 Many people, including myself, were very disappointed when Jane’s Combat Simulations dropped development of their planned A-10 sim. However, relatively soon we will get the opportunity to fly that masterpiece of the aviation industry after all, when SSI’s “Lock On – Modern Air Combat” hits the streets. Time to take a closer look at the A-10 Warthog…..

As the USAF aircraft got faster and bigger, they also got less and less suited to provide CAS. The Vietnam War made the US Army aware of the fact that there was no aircraft which could effectively, efficiently, and accurately take on the CAS role in the seventies and eighties. Although the USAF F4 Phantoms, F-105 Thunderchiefs and the Navy’s A-7 Corsair did provide CAS, these aircraft were not designed for this role. The accuracy wasn’t very good and they couldn’t loiter for long periods of time, and some of the things you want in a CAS plane is ‘slow’ speed and very good all around visibility.

There was also the problem of the lonely farmer with an old rifle shooting down a multi million dollar high performance jet, so called “single-strike losses.” The modern jet simply wasn’t capable of providing the CAS the US Army needed; they were too fast and too vulnerable and delivery wasn’t accurate enough. Throughout the Vietnam War, the propellor-driven A-1 Skyraider provided the US Army with what it really needed, but with better and modern Russian AAA and SAM systems coming into service all the time it was clear that the Skyraider was on its last legs and a new dedicated CAS aircraft was needed for the future.

Historically, there have always been specialized aircraft. In WWII, aircraft like the P-47D Thunderbolt were dealing with the mass of armored vehicles, and a mass of armored vehicles is exactly what NATO would face if it ever came to war with the Soviet Union. The basic idea was to design an aircraft that combined the armored protection seen on an aircraft like the IL-2 Sturmovik with the Skyraider’s ability to carry a huge load and range of weapons, and it should also have a long loiter time.

Brigadier General McMullen, a Forward Air Controller in Vietnam and later involved in the A-X program, came up with five criteria for a new CAS aircraft (the A-X program):

1 – Responsiveness
The pilot must be able to visually identify friend and foe and must be able to loiter above the ever-changing battlefield for extended periods of time so he can immediately respond when needed.

2 – Lethality
Destroy a wide range of enemy targets with accuracy and as little collateral damage as possible. Again with emphasis on the pilot being able to see his target so no gross errors would be made during delivery.

3 – Survivability
The ability to survive all sorts of damage and still make it back to home base.

4 – Simplicity
Maintenance and service times should be as short as possible, so the aircraft will spend most of its time in the air and not on the ground.

5 – Cost
Keep the cost as low as possible so the American Congress would allow the USAF a dedicated CAS plane. This because the people in Congress didn’t understand, and some still don’t, why a lean mean high technology dogfight machine can’t fly at 300 feet in bad weather killing tanks…and thus why the USAF would need a dedicated CAS aircraft.

To make a very long story short, on the first of March 1971 the Air Force designated the two prototypes, the Fairchild A-10 and the Northrop A-9.

We all know the looks of the A-10, but the A-9 is probably an unknown to most of you. The A-9 was quite a conventional design, not unlike the Russian SU-25, with short and straight shoulder-mounted wings. The engines, two YF102_ID-100(AVCO Lycoming ALF502) delivering 7500lbs of thrust each, were placed under each wing root close to the center of gravity, making it easier to trim in case one engine failed. Hydraulic and flight control systems were fitted with manual backup systems.

It weighed in at 23,734 lb. To keep down cost it was built using various parts of other planes, like the nose landing gear from the F-5 and the main gear struts from the A-4.

After the fly-offs, the A-9 came out as the better handling aircraft. The A-10 turned out to be a bit tougher, it had a better loading range and maintenance was easier. It also had better ground handling capability and the larger wing made it possible to carry more ordnance. Although the A-9 had better handling characteristics, all of the test pilots who flew both the A-9 and the A-10 expressed a preference for the A-10. Last but not least, the A-10 was closer to production than the A-9.

However, the A-10 met resistance from all sorts of people, like Congressmen who did not believe in the A-10’s capabilities or who simply had an axe of some sort to grind. In the end, all of these political issues resulted in a fly-off between the A-10 and an A-7D, obviously two completely different aircraft for completely different roles. It’s needless to say that the A-10 won with ease, and left the A-7D eating dust. On the 22nd of November 1974, the Air Force was given the green light to obtain 52 aircraft. In October 1975, the first production aircraft were delivered to the Davis-Montham Air Force Base, Tucson, Arizona. A legend was born.

You’re sitting in a titanium bathtub (545kg) which is not a single forging but assembled from multiple plates of varying thickness, and in some places the armor is 38mm thick. The windscreen you’re looking through is 3.8cm(1.5 inch) thick and your ass is parked in the ACES II ejection seat, which is really a very comfortable “chair.” It’s often said that the A-10 was designed around its large cannon, which off course is true, but there were other important factors in its design as well.

One of those factors was to provide the pilot with the best possible view, and they succeeded because the pilot has 20 degree visibility over the nose, 40 degrees over the sides and 360 all round.

Also of importance was the A10’s engine placement. The way the engines are placed in the Warthog offers a lot of advantages: the fuel tanks are well away from the engines, there is less chance of cannon gas ingestion, and so on. Because the engines are far apart, the chance of damage to one engine resulting in failure of the second engine due to turbine blades flying everywhere or a fire in one engine jumping to the other one, are relatively small. One damaged engine taking out the second engine or a burning fuel tank taking out both engines was a problem for the Russian SU-25 in Afghanistan. By placing extra steel plating between the fuel tank and the engines and in between the two engines, the Sukhoi engineers solved that problem. Another advantage of placing the engines high on the A-10 is that it eases stores loading and access to the aircraft’s systems in general….it takes only half an hour to install an engine, for example.

The wing placement was important as well. As was the case in the Skyraider, the A-10’s design provides a lot of weapon pylon mounting points without compromising the aircraft’s performance. The A10 comes with no less than eleven stores points.

The simplified exterior was more the result of lower drag due to lower speeds than anything else. In areas where the structure did not come into contact with the airflow, flush riveting was not used as a cost savings measure. Having exposed rivet heads is not a problem if the airflow goes over the area without producing an increase in drag.

Avoiding complicated aerodynamic shapes also helped to keep production costs down. The A-10 is 95% built of light alloys; composite materials were avoided as much as possible, again to keep costs down. The forward fuselage sections all have the same cross section, the fuselage starts to taper near the engine mounting points, and again…you guessed it, this kept costs down.

The A-10 has a dual flight control system which is widely separated physically so in case of one single hit, the chance of both systems failing is small. Should both systems fail, the aircraft can still be flown. This A-10’s “Manual Reversion Flight Control System” will kick in automatically when both hydraulic systems fail, and the pilot only has to set it manually for the roll axis.

The ailerons on the outside of the wings have a lower and upper surface, and when the airbrake is deployed these surfaces ‘split’ up and act as speed brakes. The speed brakes are deployed with a 3 position switch with an “open,” “close,” and “hold” position. Pressing ‘hold’ will result in the speed brakes keeping the position they are in at the moment ‘hold’ is selected. These speed brakes also have an impact on the roll rate of the aircraft…more on that in Part Two of this article on the A-10.

There are four wing trailing edge flaps which can be set to three positions: 0 degrees (up), 7 degrees (maneuvering and take off), and 20 degrees (landing). The flaps will automatically retract at higher speed if the pilot forgets to retract them.

As with nearly everything else, the fuel system was also designed with survivability in mind. The A-10 has four tanks…one in each wing and two placed behind each other in the fuselage between the wings. There is foam in each tank to prevent the fuel tank from exploding. The left fuel tank fuels the APU and the left engine, the right tank fuels the APU and the right engine. The fuel lines are self-sealing to prevent leaks. In case of engine fire, there are two fire extinguishing bottles and should the fire still burn after discharge the engines are designed to ‘fall off’ the aircraft, with the thinking that it’s better to lose an engine rather than have the plane burn up. Because off its design, A-10 maintenance can be as low as 6.2 hours per flight hour and the aircraft can have a turn around time of 30 minutes.

The following weapons can be carried:

In Part Two of this series, the mighty GAU-8/A cannon will get some focus, along with other topics like avionics and tactics.

History of the Fairchild-Republic A-10 Thunderbolt II, Part Two