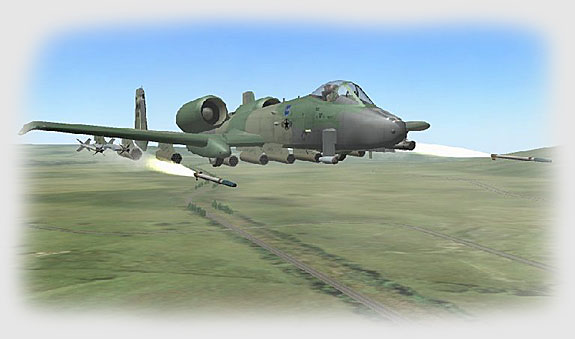 What follows is part real world info from a tactics guide from the A-10 unit stationed in England in the 1980s… the rest is my attempt to flesh out the guide with additional info. I’ve made no attempt to specify which is which… basically, the first half is Bentwaters material, and the last half is mine. In any case, the objective is to give you an idea of how to employ Hogs in a low level A2G close air support (CAS) war. LOMAC is going to offer you the chance to fly the Hog as never before. It helps to know a little about how to do this. That’s what this article is all about. Take the info… some real world, some written for simmers… and apply it to how you fly the game. Most of it is directly applicable to the game. Regardless of whether you are the flight lead or the wingie, use this info to make your mission more fun and rewarding! Having said that, let’s get going!

The tactical partners concept has been with us for quite a while. It’s different from the combat paired team idea, but just as important, tactical partners puts a little more burden on the wingman, so you guys who practice saying “two, bingo, mayday, blue lead yer on fire” over your Wheaties every morning might want to read on. As a wingie, you’ve now got more responsibility and flexibility… you share the responsibility for converting T-72s into rubble equally with your leader. As every SOS grad knows (but has probably forgotten) responsibility can’t be delegated — you’ve got to earn it. This can be accomplished with a little effort, but it depends on your ability to become a “thinking wingman”.

That is, you’ve got to know just as much about the tactical situation as the guy who checks you in… and you’ve got to be capable of functioning independently when the need arises. If you find yourself trying to invent a new way to valsalva during your latn route and don’t know a “Gainful” from a Studebaker, you’re probably not on the road to an effective tactical partnership. If, on the other hand, you spend your missions saying (to yourself, natch) “if I were leading this fandango, I’d be…”, then you’re on the right track.

When you’ve developed this attitude, there’s one more requirement, but this one’s easy. Know the standard terms, formations, and attacks (wake up, lead…this part’s your responsibility too)! If you know ‘em, and your combat paired teammate runs afoul of a ZSU, you’ll still be able to tack on to another lost lamb and get the job done. If you don’t, you’ll either be ineffective or maybe even run into your new found playmate.