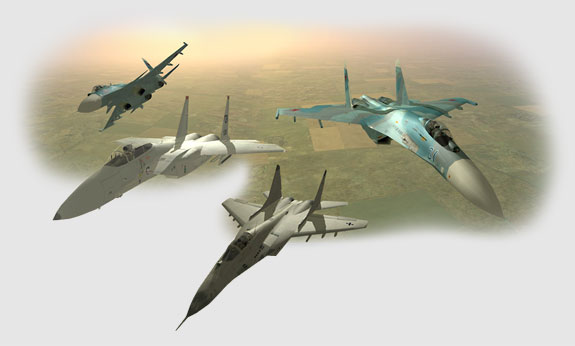 In this article, I would like to discuss how to get the best out of the fighters in LOMAC in terms of their maneuverability. When you are done reading, you may find the conclusions surprising, even counter intuitive, but if you bear with me, I believe you will see an immediate and significant improvement in your ability to out turn your opponents, real or virtual. With a little practice, everyone will be able to benefit from these ideas.

Let’s begin with an example. You are engaged Within Visual Range (WVR) against a bandit and your assessment of the geometry and relative energy states involved, combined with your knowledge of BFM and weapon employment, suggests that a hard turn is required. Having banked so that the aircraft’s lift vector is appropriately positioned you pull back on the stick, you pull back so hard and so quickly that you immediately lose peripheral vision as the screen begins to fade and the audible warning makes it clear that you are at the maximum G. The urgency of the situation, fed by the adrenalin rush, forces you to hold full aft stick, so that as the speed drops you overshoot the maximum angle of attack, and the audible warning changes to alert you of the new danger, you continue to pull back hard as the excitement mounts, but the bandit begins to gain angles and you sense that you are being out turned. As you take another ride on the silk elevator, you can’t help thinking what it was you did wrong. You might wonder if your BFM was at fault, but few would suspect that the fight was lost due to an even more basic mistake.

Remember when you flew your very first flight sim? It didn’t take very long to figure out that pulling back on your flight stick made the nose of your aircraft rise up into the sky. If you also banked the aircraft by moving the stick sideways, the aircraft could be made to turn in any direction. Nothing complicated about that right? Wrong! There are two important considerations. The first is relatively well known, it is about knowing when and in what direction to move the stick, and to do that you need to know where you are, where you need to be, and how to get there… That requires knowledge of Basic Fighter Maneuvers (BFM), and you can find a lot of information here at SimHQ on that subject. Much less well known, and even less well understood, is that how fast and how far you move your flight stick is as important as where you move it. Being a good stick is not only a question of just getting the stick where it needs to be as quickly as possible, although in some simulations or situations that can be true. How rapidly, how smoothly, and how far you move the stick has such an influence, that it can make the difference between winning and losing a fight. It was not what you tried to do, but how you tried to do it. The real question is not just about where you want to be, but about how far and how fast you should pull back on the stick to get there?

A LOMAC Mission Report: On Wings of Eagles Page 3

How to be a Good Stick in LOMAC Page 5
A LOMAC Mission Report: My First Medal!
HELICOPTER LANDING GEAR SKID TUBE SET
$975.0