Now that you know what you have and where it’s at, let’s move on to locking the missile on to a target. I’ll talk about tactical considerations in a bit… for right now, here’s the lock on procedure.

You have three ways to do this… two using the HUD presentation, and the third using the TVM. When using the HUD, you can fly the jet so that the Maverick pipper overlays a target in the HUD and then command the lock on… or you may fly the Maverick pipper into the general area of the target and then use your Maverick seeker head slewing control to move the HUD pipper over the target. In the TVM example, you can also use the slew feature to slew the picture until the target is under the gap in the TVM crosshairs.

There may be a time when you want to break the lock and move to another target. You can do this several ways. One way is to use the Ctrl-Tab combo to break the lock. You can achieve the same thing by cycling from A2G to A2A and then back again to A2G by pressing the number 6 key and then the number 7 key. A third way is to cycle the A2G weapons types by pressing the D key until to step back to the desired missile, but this is the slowest of the three options.

When selecting A2G weapons, you should expect the Maverick on station number 3 (the left pylon) to come up first. Use the D key to step to the right pylon (number 9 station) if desired. Fire the missile by pressing the spacebar or pulling the trigger.

The seeker head on both types of missile can be slewed up/down and right/left within the limits of the seeker design. On the TVM display, the lateral limits are a little less than 30 degrees (the TVM is +/- 30 degrees from center to edge). When you slew the seeker head, the pointing cross will move to show you where the seeker is pointing relative to the missile boresight. Lock ups are possible out to the edge of the TVM, but I suggest that you limit your slewing to about 15 degrees in any direction. The seeker head takes time to move, and it is easier to hold the jet steady for a shorter time than longer! Therefore think of the area inside the brackets as being the practical slew limits, just as a matter of technique. For targets that fall outside these limits, turn the plane to move the targets inside the brackets (when in 3X). When you do this, don’t turn using the TVM! Look up to the HUD, make a heading and/or pitch change, and then check the TVM to see if you got what you wanted. It’s possible to overcorrect when maneuvering using the TVM.

As far as technique goes, I programmed the slew function to one of the hat switches on the top of my F-22 Pro flight stick. In the real A-10, this control is on the throttle quadrant, but for me, the F-22 control was easier to use than the TQS throttle slew control button.

When to shift magnification when using the IR missile? A good technique is to search and acquire in 3X… and lock in 6X. 6X gives you a better and more precise look at the target array… that way you may be able to isolate that ZSU from a grocery truck!

When it comes to locking targets, be careful to look for two things… the area actually under the crosshairs and a flashing pointing cross. It is not unusual for either seeker type to not lock the exact target you intend to lock. The EO seeker is particularly susceptible to locking a contrasting area that is not the desired target. You have three lock on indications… a HUD Maverick pipper with the lock on cross inside it, a TVM picture with the crosshairs centered on the target, AND a flashing pointing cross.

Here is a shot of a slewed Maverick pipper… it’s down and to the left of the gun cross. Notice the position of the pointing cross in the TVM. 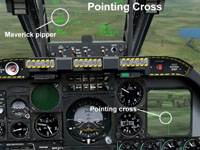 The “normal” position is centered on the 6 o’clock axis and just above the 5 degree depression mark. In this situation, the slewed pipper is close to the flight path, resulting in a pointing cross that is above and right of its normal position. When you slew the HUD pipper, the TVM pointing cross moves in the same direction, up to the +/- 30 degrees of allowable travel.

If locking while using the HUD to point with, once you get the HUD pipper cross, immediately crosscheck your TVM to verify what actually is locked… you want the tank… not the shrub next to it!! (In real life, we referred to these as tactical bushes)!! Then double check to make sure the pointing cross is flashing and visible.

The next shot (below left) shows a slewed pipper with a lock cross symbol and a TVM with the crosshairs centered on the target. The pipper is slewed down and to the left, as is the pointing cross.

What does a “bad lock” look like? Here’s one (below right). The TVM crosshairs are not on a target. The pointing cross is low and offset right as is the HUD pipper. With a picture like this, do not shoot! The Maverick will not self-correct! 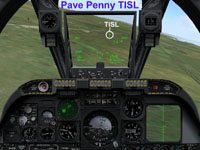 Pave Penny designated targets will be identified by a diamond that appears over the target’s location. Often, the diamond (known as the TISL symbol… for Target Identification System, Laser) will be visible long before the actual targets are.

Because of this, you can maneuver to place the Maverick HUD pipper in the area of the TISL diamond and then check the TVM to see if the targets are visible. This is particularly true when using the IR missile. Use the Pave Penny system to increase your stand off distances and thereby reduce the threat level! However… one note of caution. It’s not as simple as pointing the HUD Maverick pipper at the TISL, locking, and firing. You must use the TVM to verify what is locked… or if a lock exists at all! You need a steady crosshairs over the intended target and a visible and a flashing pointing cross.

When you want to maneuver to aim the jet into a target area, avoid using the Maverick HUD pipper as an aiming cue. Note the top of the HUD display… there is a small cross… this is the gun cross symbol. It is also very close to the aircraft flight path when in one g flight. My suggestion is that you initially maneuver using the gun cross to aim with. The gun cross is close to the roll axis of the aircraft and is a reliable maneuvering and aiming reference. Once you have the gun cross in the general target area, then use the HUD Maverick pipper or the TVM to complete the missile lock. If you try to maneuver with the HUD pipper, you will likely experience “pendulum effect” because the Maverick pipper is well below the roll axis of the jet. Consequently, if you try to place the pipper on the target while in a bank, pendulum effect will often result in lateral overshoots when you roll wings level.

OK… let’s wrap up this Maverick discussion by restating the high points. Here are the “biggies”: