In the A-10, you will normally shoot the Hydra 2.75” unguided rocket in both explosive and target marking versions. These rockets are carried in pods that will be loaded directly on to armament pylons. 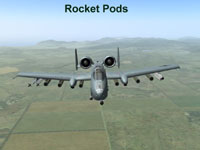 The Maverick has a launch symbology that is only as complicated as is needed to get you into the general ballpark. Then the missile takes over. You shoot it and it does the rest. Not so for rockets.

They are the proverbial dumb bunnies… they are only as good as your launch point… so it better be good!

That is why the Maverick only uses a fixed pipper firing reference… while the LOMAC A-10 rocket firing index is a full up continuously computed impact point (CCIP) display. If you can get the rocket pipper on the target and meet launch restrictions, you stand a good chance of getting a hit. Let’s talk a little about getting that pipper on the target and then about your chances of getting a hit.

I won’t go into rocket delivery academics… see the SimHQ article on A2G delivery techniques here in the Air Combat Corner Library for that info. Instead, let’s just review a general understanding of what the rocket actually is. Think of a rocket as a powered bomb… and it’s only powered for a brief time. Once fired, the rocket is on its own…like the bomb, it is now at the mercy of gravity and the initial direction that it was fired. It is unlikely that you will ever see a rocket that is the “golden BB”… meaning one release for a sure kill. You will carry lots of rockets… but not to kill lots of targets. Instead, you need a goodly number of rockets to up your hit probability. To use a hunting analogy, the rocket delivery is much more of a shotgun that it is a scoped deer rifle. A rocket salvo is below. 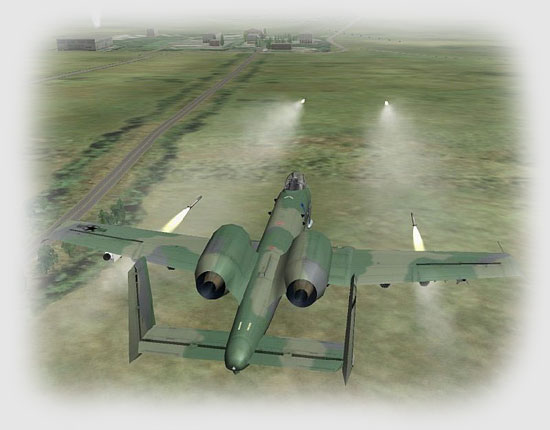 Let’s start with the HUD symbology for rockets. 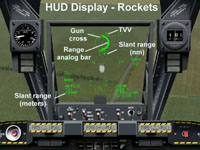 The first thing you notice is that the pipper is twice as big as the Maverick pipper (50 mils vs 25 mils), and it moves! That’s because the rocket pipper attempts to show you a continuously computed impact point… sort of a “shoot now and this is where the rocket will hit”. Next, the pipper has a moving arc…this is a range analog bar that shows slant range in feet to the target out to a maximum of 12,000’. Below the pipper is another range readout…this in nm.

Now, here’s a bit of technique and a bit of WAG also (WAG… wild a** guess!)… but I look at the analog bar in the pipper as a sort of maximum-optimum-minimum range indicator. 9 o’clock is max range, 6 o’clock is optimum, and 3 o’clock is minimum. In the following screenshot, I put myself into a dive to check out rocket dispersion. I fired as I was approaching a 6 o’clock analog bar indication. 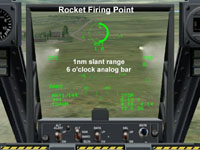 Note the slant range distance… 1.0nm… or about 6000’. Now rockets have not changed since before I was a Lieutenant (and that was a long time ago!)… so I pulled out my F-104 rocket ballistics tables to check slant ranges vs dive angle. Lo and behold, the tables had numbers very close to the 1.0nm in the screenshot. What does this tell me… well, at least the game has fairly realistic slant range values… and slant range is one of the primary determinants of rocket accuracy. Bottom line… I am a happy camper to see the game values where they are.

Now… how about dispersion? Dispersion is the enemy of forward fired ordnance. It’s a fixed value and the further out you fire, the wider the impact area. So it is in the game. My advice on this is to not fire further out than a 6 o’clock analog bar, while avoiding shallow dive angles.

Why avoid shallow angles? Because of what is called the “graze angle”. Dispersion acts in all directions… but at lower dive angles, the 6-12 o’clock dispersion is actually spread out along a much further distance than the impacts at 3-9 o’clock. This is known as the “flashlight effect”. As the angle of a flashlight beam is shallowed out, the beam pattern elongates… the pattern is the smallest at an angle of 90 degrees and gets progressively larger as the angle lessens. This flashlight effect happens when we shoot rockets at a shallow angle. In this next screenshot, I shoot a salvo of rockets at a convoy. While the pipper placement looks good, the actual rocket impact points are spread out quite a ways due to the flashlight effect.

In this example, I attack at a shallow angle and the rocket impact area is strung out along the 6-12 axis of my attack flight path. Very small changes in pitch attitude result in relatively large miss distances on the ground. What is the cure for this? Steeper dive angles… and shoot more rockets! Your probability of hit is going to increase with the number of rockets fired. 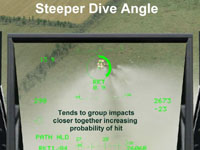 Here is what a steeper dive angle produces (right).

Here is another consideration… but a less significant one. Rockets fire straight ahead. They are not “harmonized” like WW2 wing machine guns (no convergence). The rocket pods on the Hog can be as much as 20’ apart… when the rockets impact, they will still be 20’ apart. Can you… or should you take this into account. I don’t think so. Instead I mention it only to reinforce the idea that the rocket is not a surgically precise weapon… it’s an area weapon, and you need to aim carefully and shoot more than one to have a chance at a hit.