And so we finally arrive at the whole point of the Hog… the GAU-8 30mm cannon. Why last? Because a number of the previous considerations apply as well to the gun… but may not be as well understood in Maverick or rocket employment. Having gone into detail earlier, I’ll only briefly mention the subjects in this discussion.

The A2G gun display is a CCIP pipper similar in concept to the rocket pipper. Ideally, all you have to do is put the pipper on the target and fire. Maybe… maybe not.

First, the CCIP pipper. Like the rocket pipper, the gun pipper moves as a function of your flight control inputs. In this sense, it functions much like an A2A LCOSS. The gun CCIP includes a range analog bar that displays closing ranges inside a slant range of 12,000’. The 11 o’clock position is the “max range” or 12,000’ indices… if outside 12,000’, the analog bar remains fixed. 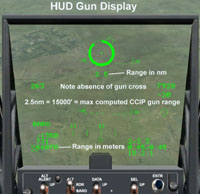 Range is computed as a function of dive angle and height above ground. The weapons computer does a quick trigonometry calculation to compute slant range as the hypotenuse of your dive angle triangle. Whoopee! Now that you know that, let’s move on to killing tanks!

While the gun is good out to 12,000’ or more, the dispersion of the gun and sight computational inaccuracies tend to gang up on us and result in low Pk (probability of kill). A better idea is to get a little closer, conditions permitting.

How close? Remember the 6 o’clock pipper in rockets? How about using the same gouge in guns! A 6 o’clock analog bar will work out to be a slant range of about 6000’, and this is about as far out as I want to shoot. And then only at thin-skinned targets such as trucks. Tanks… I’ll wait until I’m closer… inside 4000’. That equates to an analog bar close to 3 o’clock. So… technique says 6 o’clock bar for soft targets, 3 o’clock bar for hard targets.

The gun line is very close to your flight path when at one g. This good… it allows you to maneuver and have your firing symbol close to your roll axis (unlike Maverick and rocket deliveries). However… in our LOMAC HUD, things can get a little busy at times. A lot of symbols can compete for the same HUD location… symbols such as the pipper (naturally), and also the TVV (total velocity vector… your flight path indicator). You can also throw in the Pave Penny TISL if one is present.

What this means is that you can have a lot of symbology garbaging up your HUD as you roll in for the kill. The roll in point is usually a fair distance away from the target… this means the target is pretty small… hard to see… and the last thing you need is HUD symbology that covers up the target! This is not hard to do since a tank at 12,000’ is not much bigger than the pipper in the CCIP display (here, by pipper, I mean the little dot in the center). 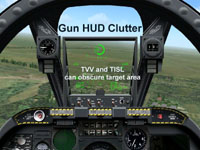 What do I do about this? I declutter the HUD… meaning I remove some of the offending symbols. How? By beginning my gun attack in a weapons mode other than gun mode. Maverick mode, for example. The CCIP pipper is not in view, the Maverick pipper is displayed well down in the HUD, and the TVV will be displaced depending on how many g’s I pull as I roll in. What’s left?

Good! I knew you were paying attention earlier! The GUN CROSS! The fixed little gun cross symbol that we can use to initially aim the jet at the target. It’s small and unobtrusive and let’s us have a good view of the target. 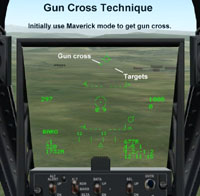 What about range you say? You’ll have the range on the HUD… remember, it’s computed in all weapons modes. Personally, I don’t use it. I’m far too busy lining the gun cross up as I observe target relative size. Look at that last screenshot again. See the Maverick pipper… the dot? Use it as a rough gauge of when to switch to guns mode. Wait until the target is at least twice as big as that pipper dot. For a typical tank or truck sized target, that works out to be around 5000’ range.

Now… when the targets get this size, press the C key and get into gun CCIP mode. Your CCIP pipper should appear very close to the former position of the gun cross (it goes away in gun mode). In the next screenshots, note that when I switch to gun mode that the gun reticle appears very close to where my initial gun cross was.

If you had your gun cross below the target, chances are good that the CCIP pipper will be below as well. That’s good. Here’s why. 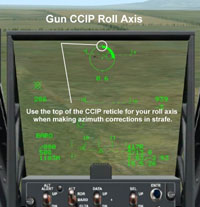 Now… once you have corrected for any azimuth errors… check your analog bar range again and raise the pipper up to the target. It’s showtime!

Press the trigger or the spacebar and fire a good burst. How much? At least one second’s worth. Count “one potato, one” and release the trigger. And what is the firing technique? We’re going to use the same technique that we did in our rocket delivery. Track, Shoot, Track! Put the pipper on the target… and while you pull the trigger, concentrate real hard on holding the jet rock steady. When the smoke clears, you want to see the pipper still on the target and the rounds impacting those godless little Commie heads. Then you can pull out of your dive… but not before. This technique is all about “follow through” and the importance of maintaining a stable and consistent aiming point.

One more thing… just like in rocket delivery, when strafing, stay off the rudder. “Kicking rudder” in a strafe pass is a bunch of baloney. If someone suggests this as an effective technique, don’t believe it. It isn’t… it’s a lousy technique. Put your feet on the floor and leave the rudder alone!