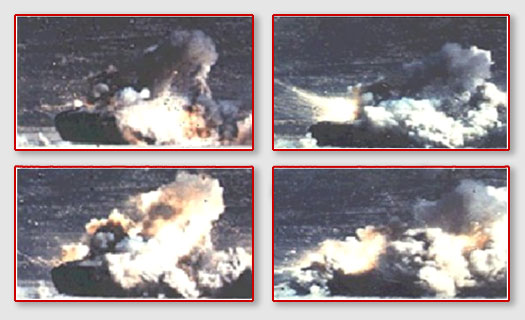 There is a lot happening in a strafe pass. The last thing you want to worry about is trim changes. I suggest you trim the jet slightly nose down before you begin your roll in… you want to hold a little bit of back stick pressure on final. Next, since trim is directly connected to airspeed, when you roll out with your nose pointed at the target, throttle back a little. Try not to be accelerating all the way through the pass… it only compounds your potential for trim changes. Increasing airspeed often means the tendency for the nose to rise… you do not want to compensate for a self-inflicted error just as you are about to pull the trigger! In any case, from a technique point of view, I find a slightly heavy stick much easier to deal with than one that requires me to push the stick forward to maintain my aiming point.

Low dive angles result in a tendency to walk your rounds through the target rather than concentrating them on it. Note this effect in the next screenshots… look at the impact marks and the distance between them. This grazing angle error is the same as we saw in rockets. The steeper the dive angle, the more likely you are to avoid walking your rounds.

I begin by firing with my pipper just below the target… and then fire a long burst. As my jet moves forward, the pipper “runs long”… meaning it moves up and through the target. The result is a long impact path running through the target… not a high Pk shot! Solve this by concentrating on pipper stability during firing… this is the heart of the “track — shoot — track” technique.

This zipped avi video file (2.36MB) shows “Walking the Rounds”, and the audio captures the distinctive sound of the GAU-8 firing.

The GAU-8 is designed to shoot 80% of its rounds through a 5 foot diameter circle at a range of 1000’. That is a pretty tight group… but the further out you shoot, the wider the dispersion pattern gets. At 6000’, that circle now has a diameter of 30’. Doesn’t sound too bad until you realize a typical tank is only 20’ long and about 10’ high. To illustrate the problem of dispersion, here is a typical dispersion pattern.

Surprise… I bet you thought every round was going through the target! Remember the analog bar and its relationship to range. Don’t fire too far out! The image at right shows what a typical dispersion pattern looks like at about one mile.

Finally, shoot in high rate. The game gives you the option of selecting high or low rate (at least my beta version does). Don’t even think about low rate. In real life, we didn’t. Not in combat, at least. 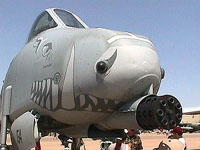 All right… here are the high points for the gun:

That’s It! You all have fun out there!

This is the computer that I used in this article.