A Day-by-Day Report from the Show

When I told folks that I was off to spend a week at Sun ‘n Fun, even my mother-in-law thought it was something kinky. No! Not at all. Kind of the exact opposite, really. In fact — and this really did happen yesterday — my buddy Joe and I were watching out the back door of the media center as three airplanes taxied in after landing together. Two pretty girls walked by, but neither of us noticed. The conversation went like this: “Are they Navions, or is that last one a Meyers?” “Nah, they’re all Navions, see the tip tanks?” “You can put tanks on a Meyers.” “Is that an STC?” And so on.

For those that don’t know, Sun ‘n Fun is arguably the biggest regional fly-in conducted each year by theExperimental Aircraft Association.

Sun ‘n Fun has become a rite of spring among American general aviation pilots, or at least those in the eastern half of the country. It kicks off the annual air show season, and is fondly regarded as a harbinger of luxuriant, warm, glowing days just ahead after a long, cold, grounded winter. The EAA’s other big show and national convention, AirVenture 20XX (which is still universally referred to simply as “Oshkosh”) may draw in more airplanes, pilots and just plain (plane?) enthusiasts, but Sun ‘n Fun exudes a certain focused group purposefulness that Oshkosh, the frenetic celebration of all things aviation, somehow lacks. While neither show is really dedicated to past and present military aviation, either is a good choice if you want to hear the growl of a Merlin or the roar of a low-bypass, afterburner-equipped turbofan. But there’s more to these shows than that.

If you want to know what a bengal tiger looks like, you could visit a natural history museum, where you’d find some gorgeous taxidermy that will certainly show you what a tiger looks like in the (albeit stuffed) flesh. But if you wanted to discover what a tiger was really like, what it sounded like, how it smelled, how it moved, you’d have to go to a zoo. And when you left you’d have a much better idea what a tiger was all about than if you’d only gone to a museum. (Kids intrinsically know this. That’s why they’d rather spend the day at the zoo than at a museum.) 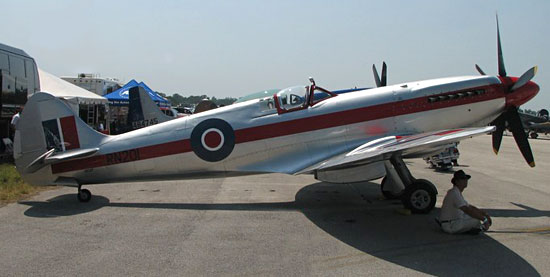 Has there ever been an airplane designed with better lines than the Spitfire? 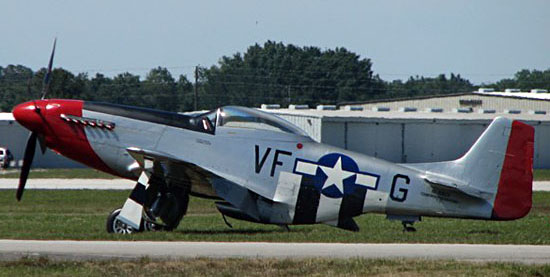 Going to an air show is the equivalent of going to the zoo. There’s nothing like seeing a polished navy blue Corsair get tossed around the pristine sky by someone who knows what he’s doing to learn what the airplane’s all about. The angle that sets Oshkosh and Sun ‘n Fun apart is that afterwards, you can walk around the airplane, climb up to peer into the cockpit, and perhaps spend a few minutes talking to the lucky soul who flies it. To continue the analogy, it’s the aeronautical equivalent of a petting zoo. Once you’ve had the owner show you how to do a preflight on a P-38, you can say you well and truly know it. At least, as much as you could without taking it around the patch yourself.

Aviation museums have their place. Outfits like the Commemorative Air Force, that maintain the airplanes in flyable condition and actually fly them, too, are better. But to really understand airplanes, go to one of the big shows. You will not be disappointed.

B. It’s a more visceral aviation experience (there are few things more visceral than a Skyraider doing an engine run-up at 7 AM); and,

C. Because my wife says it builds character, and I need all I can get.