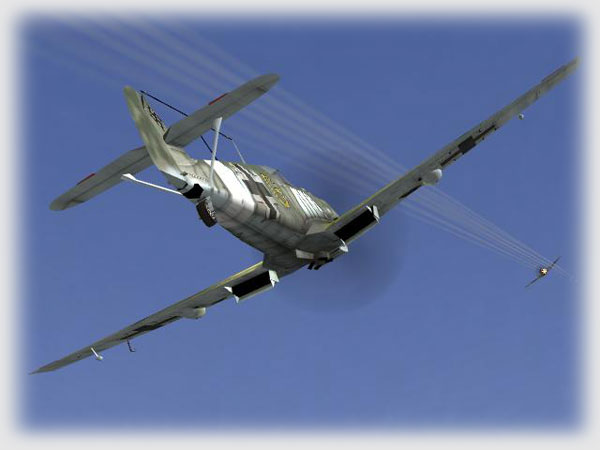 Gunnery — the most difficult thing to learn and master in early and pre-jet combat flight simulations. Knowing the fundamentals can make the difference between “spray and pray” and knocking targets out of the air.

Before we get into pictures and the inevitable math, let’s make sure we’re talking the same language:

Aircraft: For the purposes of this article, one’s own plane is exclusively referred to as an aircraft.

Target: For the purposes of this article, the aircraft one is shooting at will be exclusively referred to as a target.

Convergence: The point where all rounds cross in front of the aircraft’s sight, expressed in distance (yards or meters). At the point of convergence rounds are massed in a single point, causing the most destruction.

Deflection: The offset angle from the gun to the target; the “lead.”

Target Range: The range a target will be at when the rounds impact. This can be different than the “Range” above, in that it allows for aircraft traveling at different relative speeds.

Range: Distance from gun to target when rounds impact.

Angle Off: The angle of the target in relationship to your aircraft. If a target is flying perpendicular to yours, it would have a 90 degree angle off.

Degrees: Angular measurement based on dividing a circle by 360 evenly spaced slices.

Mils: Angular measurement based on dividing a circle by 6,400 evenly spaced slices. One degree is 17.8 mils.

Ring: The circle that is on the sight used for ranging and determining deflection.

Primary Ring: Where there is more than one circle on a sight, it is the one that establishes base ranging when attacking targets. Usually thicker or a solid line (versus dashed) when there are secondary rings.

Secondary Rings: Additional rings on a sight to help with range and deflection determination.

Supplementary Lines: Straight lines placed on the sight to assist in aiming.

Katywhompus: Askew. Normally describes situations where things are out of whack of each other in multiple ways, e.g. “So I’m slipping left and climbing, he’s slipping right and diving and I fired all katywhompus while trying to roll.”

Time of Flight: The amount of time it takes for bullet or cannon rounds to travel a set distance.