The Nature of Bullets and Cannon Rounds

Bullets and cannon rounds (which I’m going to refer to simply as “rounds” from now on) are the ultimate fire-and-forget weapons, as one has no control of where they go once fired.

Rounds follow a ballistic arc, dropping in elevation as they travel across the face of the Earth. The drop is mild at first, but as aerodynamics forces the round to slow down it drops more steeply.

To take this into account, the guns and cannon of an aircraft are aimed slightly upward on nose mounted guns or upwards and inwards on wing mounted guns.

The range where the rounds cross the center of the cross hairs of the sight is the convergence. It’s adjustable, and varied from the doctrinal 250-300 meter range right down to 100 meters by some notable Aces.

Rounds slow down by roughly an eighth (or more) for every 500 meters. At roughly 2,000 meters they’re no longer deadly if they manage to strike a target in the air.

What that means for you is that while the median average of gun and cannon muzzle velocity is 800 meters per second, they will be going slower further out, increasing drop.

Half a second to travel 400 meters may not seem like a long time, but when one factors in that one is shooting at a target that may be moving 20 meters a second up or down or 60 meters per second left to right (or both!), you could be missing by as much as 40 meters if you fire where the target is — rather than where it will be.

The idea is to get the target to fly into the bullets one is firing.

Determining range is a matter of using the reticule ring and dividing it into fractions — I use fourths and SWAG things in between.

How this works is a little phenomenon where an object appears half its size at twice the distance from the observer. If we know the actual size of an object we can figure out just how big a given object will appear at 100 meters. Conveniently enough, we can draw a circle on a reflecting sight to use as a ranging tool if we calibrate it for a given target.

In the Hurricane and Spitfire the circle on the sight is calibrated for the FW-190. For the sake of being pedantic, the circle is 105 mils in diameter to match the wingspan of 10.5 meters.

When the wingtips of a FW-190 touch the edges of a Hurricane’s reticule circle, it’s 100 meters from the aircraft.

Half a reticule circle (wingtips from circle to center dot) is 200 meters.

A quarter of the circle to the center dot is 400 meters.

Oddly enough, the sight in the FW-190 is calibrated to the Spitfire; when a Spitfire is wingtip to wingtip on a FW-190’s sight, it’s at 100 meters. It’s almost like they had it in for each other!

The problem is that not every target has an identical wingspan of a FW-190 or a Spitfire, so one has to know how much bigger or smaller a target is. For example, an He-111 is roughly twice the width of a FW-190; when it is wingtips to circle, it’s at 200 meters. At half the circle, it’s at 400 meters. I’ve looked at a lot of online tracks of folks (especially myself) firing way too early against bombers because they thought they were closer than they were.

I made a film on ranging and a beginning guide on convergence which can be downloaded here will hopefully help out. The video is 26 MB zipped in .wmv format.

Knowing the distance to a target lets one know when to fire and when to hold, and where to set one’s convergence distance. 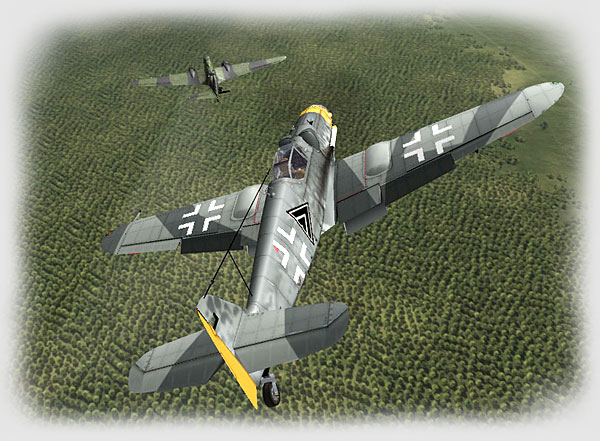