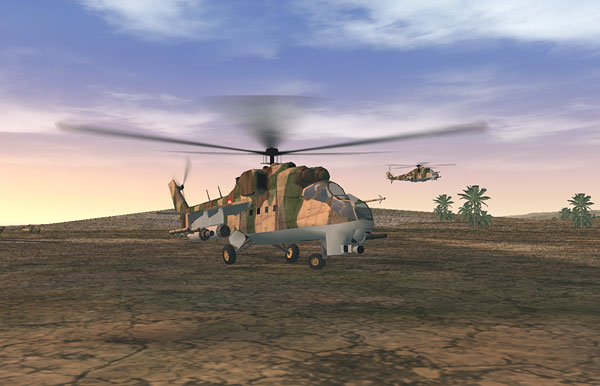 Imagine what it must have been like to be an APC driver back when the first of them were fielded in the 60s. You have minimal weapons with no real provision for self defense. If you came under fire you had to count on the folds in the terrain, the durability of your ride, and your wits to survive. Your offensive power was your payload, a squad of fully fitted combat troops. It was your job to get them safely in and out of the battle in your noisy, lumbering machine. Okay, now imagine that your APC can fly, too.

That’s what life was like for early Mi-24 pilots. Things are better today, of course. Late model Hinds are able to mount and deliver all the latest high-tech weapons. A modern Hind is very much more an IFV than a basic APC. But there was just something about the way you had to fight in an older Hind.  If you were tasked with taking out an AA site, you were going to have to get right on top of it to hit it with your rockets or guns. None of that pop up, get your targets, return to cover, and shoot your Hellfires over the hill. Combat in early Hinds was more macho, more visceral. Not that that’s always such a good thing, as Russian loses in Afghanistan showed.

Whether it was that macho aura, or the popular (if mostly exaggerated) flying tank image, I’ve always been a fan of the Hind. I was thrilled when flight sims began appearing that let us fly virtual versions of such legendary aircraft. I’m sure I played DI’s whack at a Hind sim for many hours more than it deserved. Yes, the flight model was clunky, the graphics were blocky and ugly and although an attempt was made at recreating the experience of operating the actual helicopter, I was among those who were ultimately disappointed. Still, at the time, I loved it, because I was flying a Hind!

And I was right there when EEAH and then EECH came out. EECH is a terrific sim, has been almost from the beginning. But I was crushed. No Hind. Oh, it was in there, and it looked pretty good, too. But we were not allowed to fly it. Years later, with community mods, yes, I could finally fly the Hind. Sort of. There wasn’t really a Hind cockpit, and it was only the Apache flight model. It wasn’t the same. Well, now the time has finally come. I can actually say there’s a reasonably realistic Hind for EECH.

All Hail to the Master

If you’ve paid any attention at all to the EECH/EEAH Forum here on SimHQ, you know the name “arneh”. He decided some time back to take on the mantle of EECH developer and custodian, and those of us who consider themselves part of the EECH community all owe him a huge debt of gratitude. In the past he’s done what he could to allow EECH to take advantage of improving computer technology. Thanks to him, a game that’s 8+ years old is nearly as satisfying visually as current offerings. He also brought us a much more realistic Apache cockpit, to replace the minimalist one in the original game. And now, in time for Christmas, he’s come out with a holiday two-fer for the EECH community — a nicely detailed Hind cockpit, and a truly stunning terrain graphics update.

Helicopters may be creatures of the air, but they stay closer to the ground than other aircraft. It makes sense that terrain enhancements would have a big impact on the player experience. And, although terrain updates have been extensive over the years, not much changed about the area that, as pilots, we got to see a lot of — the FARP. Finally, the FARP graphics have had a makeover, and the results are spectacular. 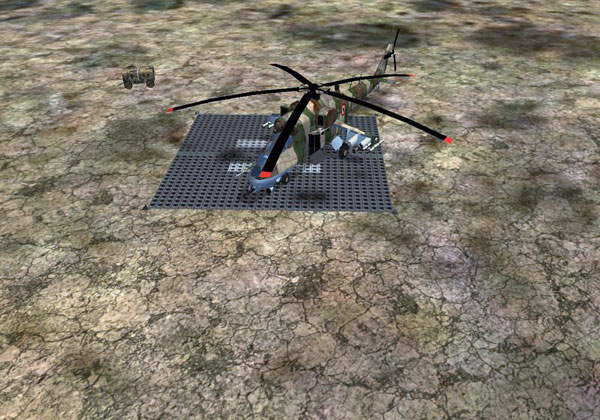 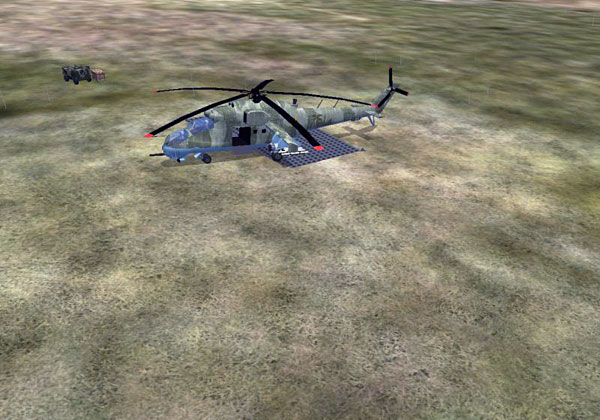 Arneh refers to the upgraded textures as “noisemaps”. As someone who inhabits only the outer fringes of computer geekdom, I don’t really know what that means. But what it means to you as a pilot, looking through the windscreen, is enormous. Finally the ground looks like, well, ground.

The difference between the old sterile textures and the new noisemaps jumps out at you when you’re on approach to land. In real life, pilots use visual cues from the area around the landing point to judge speed and altitude. That was hard to do in EECH when there were no such cues.  I’m a lot more precise now getting the aircraft down where it should go. I even hit the mat now and then.

A big thanks to “mapi” and “dfang” for the new FARP mats.

That said, I have to lower your expectations just a tiny bit. EECH as updated in this latest mod does not look as good as, say, a certain recently released helo sim. How can it? It’s 8 years old and based on DirectX 7! Imagine playing FS2000 now. Even updated, I don’t think so. Newer versions of FS have a lot more going for them besides updated terrain graphics. The functionality of the sim, and the capabilities it provides to the user, are so much better than what FS2000 offered that it’s impossible to imagine still playing it today. Yet EECH lives on, and nothing yet seems to have come close to its blend of realism, playability and enduring freshness. With this latest update EECH looks better than it ever has before, by a pretty fair margin. It runs smoothly on most graphics cards out there, cards that didn’t even exist when the sim first appeared. And it looks great on even a two- or three-year-old video card in a hopelessly obsolete computer like mine. You can’t say that about any brand-new sim.

As amazing as the newest terrain enhancements are, they’re just the fancy lettering on the icing of the cake. The high-fidelity reproduction of a Hind cockpit is really what this update is all about.