Part VI: Into the Heart of The Bear

Ulyanovsk’s Baratayevka Airport is the site of the Museum of Civil Aviation and has on display arguably the best preserved ex-Aeroflot Tu-114 (the example at Monino — which is the one I’m flying on this tour — was finished in an executive configuration and never entered airline service). Unfortunately, Microsoft in its limited wisdom has chosen not to include in the sim Baratayevka Airport and the only museum in the entire country dedicated to non-military aviation (duh!), so I had to stop at Ulyanovsk’s Vostochny instead. Domodedevo was the main base for the 114 through its years of service after the airplane debuted at Vnukovo. Right up the road from Domodedevo, Vnukovo is home to the Tupolev Rework Facility, the company’s main service and repair center in Moscow. 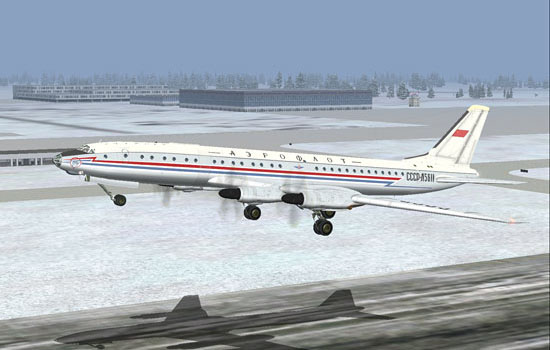 It would be difficult to overstate the importance of Moscow to the Russian Federation. It’s the largest city in Europe, and one of the largest metro areas in the world. According to Wikipedia, Moscow is “the country’s political, economic, religious, financial, educational and transportation center.” To that I would add that it’s also the cultural and military center. For one US city to be the nexus of so many different social sectors, we’d have to combine New York, Los Angeles, Chicago and Washington. And probably two or three others I’ve overlooked. All roads might have led to Rome back in its empire days but during the Soviet empire, all roads, rails and airways led to Moscow. That’s still the case today.

Post-Soviet Russia has embraced capitalism with a vengeance. New construction can be seen everywhere. Obviously there’s a good deal of money moving around. Moscow is second only to New York in the number of billionaires that call it home. And it was named the world’s most expensive city for the past two years.

The wash of new money is also evident at Moscow’s three airline airports. (For those keeping score, that’s Sheretmetyevo, the main international airport; Domodedevo, the primary domestic gateway with some international traffic; and Vnukovo, with a mix of domestic and international service, and growing fast.) After decades of benign neglect terminals and facilities are being remodelled and modernized, and new infrastructure installed, at a frenetic rate more often seen in the West. Moscovites understand the importance of keeping the passengers — there were nearly 40 million of them in 2007 — who use their airports happy. Investment in world-class airports pays off. 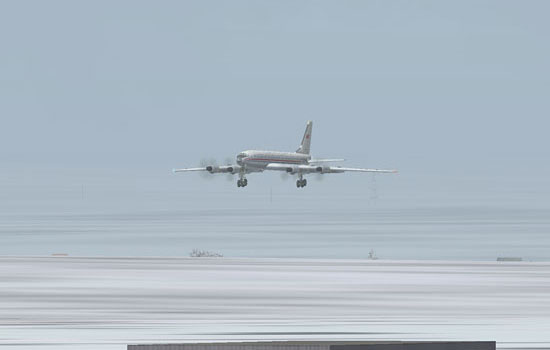 The view from the Domodedevo tower on short final.

The Central Air Force Museum is located at Monino Airfield, 21 miles east of Moscow. Its collection includes 179 rare and historic aircraft. It is one of the largest institutions of its kind in the world. For a US museum to have comparable significance it would have to combine the collections of the National Air and Space Museum and National Museum of the Air Force. Don’t bother looking for it in the sim. Microsoft left it out, too.

I routed the short repositioning flight from Domodedevo to Vnukovo up over the center of Moscow so I could do some sightseeing. There was a major thunderstorm moving in from the northwest at the time. It was giving the north side of town a pounding. 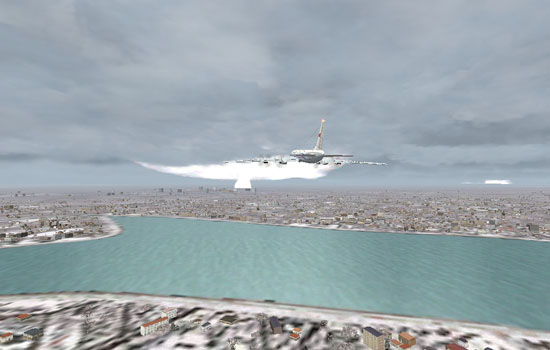 That’s Saint Basil’s in the foreground, with the Kremlin beyond. Microsoft could have put a little more effort into the Red Square-Kremlin representation. Someone might want to land Cessna 172 there. Oh, wait, that’s been done. 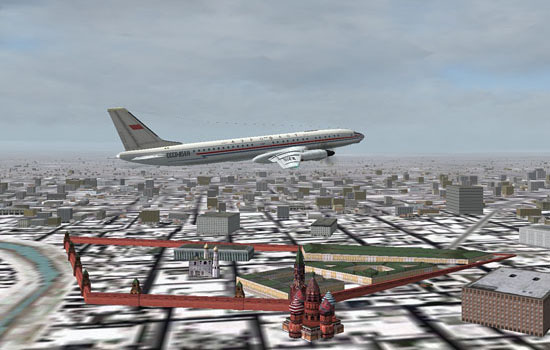