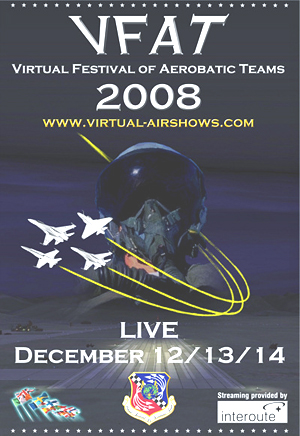 The Virtual Festival of Aerobatic Teams, VFAT, has an annual festival to showcase the flying abilities of teams from all around the world, and 2008 is no exception. VFAT 2008 promises to have absolutely stunning team performances, streamed live on their web site: www.virtual-airshows.com.

If you’re not familiar with VFAT, it’s an international festival, using the Lock-On flight simulator. Teams build their own paint schemes and skins centered on the flyable aircraft models in Lock-On. To quote from the VFAT web site: The pilots mostly simulate the displays of real aerobatic teams like the Patrouille Suisse, Thunderbirds, Blue Angels, Russian Knights and Blue Impulse, however, many teams also create their own spectacular displays instead of simulating real life counterparts.

It’s quite an event and we’re happy to interview one of the pilots on the Virtual Blue Angel (VBA) team, Nathan Truninger, call sign “Rhino”. Nathan flies the lead, number 1 slot.

20mm: Rhino, thanks for being here and for your time as well as the team in doing this interview.

20mm: Let’s start with some basics. Tell us about yourself and your involvement with the VBA.

Rhino: I am currently 22 and am a senior at Western Illinois University studying Emergency Management. I got started with the VBA in late 2006. A few friends of mine got sick of being punted by SAM’s and MiGs in Falcon 4: Allied Force and decided to try to see if we could create a demo team with Falcon 4. We had about 8 pilots from all sorts of different squads (Multiviper, Freebirds, etc.). As many people know, however, Falcon 4’s net code is not the greatest, so we basically hit a “wall” that we weren’t able to get past with formation flying. At about that time, I had heard through the grapevine that the VBA were soon going to be looking for pilots, so I sent my application in ahead of time to “Kato”, our commanding officer, with a long letter on how I wanted to be a VBA, especially after seeing the groundbreaking video that the team had put together in 2006. Obviously the application and following tryout were successful for me and the team, and here I am!

20mm: Great! What was the tryout process like? Did you send them a video or was there a “live” tryout with the team or how did that work?

Rhino: I was invited into the team’s Ventrilo to basically as “Kato” put it, “just go fly and have a good time”. That statement right there quelled a lot of nervousness that had been built up the day of the tryout in anticipation. We went flying with me leading and a couple of team members following, and the rest is/was history!