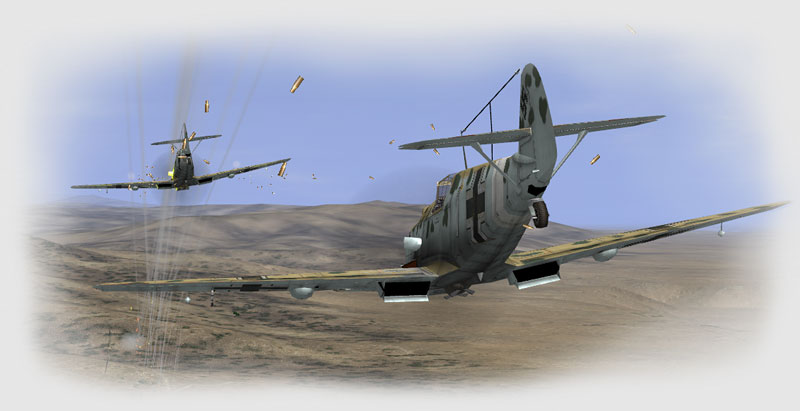 We’ve all been there — flying in the vicinity of other friendly aircraft online when a pair of enemy fighters arrives and shoots everyone down, regardless of numerical superiority over them. How does this happen? They’re using the oldest cheat in the book…

The object of this article is to give an overview of easy techniques a Leader-Wingman pair in the often ad hoc environment of flying online can use to survive. I’ll be deviating from historical doctrine here and there, but for what I hope I can put forth as good reasons.

The primary objectives of teamwork are survival first
and defeating the enemy second.

We all want to shoot down the enemy, bomb their ground forces, and perform heroic deeds in the virtual skies. It’s why we have combat flight simulations. We also prefer to shoot down other virtual players, as the thrill of besting a human is greater than outsmarting a robot.

Too often the basic premise is forgotten in the buck fever chase for a quick kill: A pilot that survives has an infinitely greater chance of shooting down an enemy than one that is dead.

My experience and observation of squadron actions is that when pilots act for self and collective preservation first and offensive action second they actually score more kills than when they act alone.

And it’s a lot more fun. One minute of fierce combat where one enemy is shot down at a cost of one’s own plane is fun. Five minutes of combat where two or three enemies are shot down by a team with both flying back to base to land is even better.