Hello and welcome to the birth of a new F/A 18 sim! I’ve asked for and been granted an interview with the team responsible for this new sim in development, Seven-G. For this interview, we’ll be throwing questions at “GT”, one of the project leaders.

Thank you for your time “GT”. Okay, let’s see what making this sim tick…

531 Ghost: We think it’s great that another F/A-18 simulation is being developed, but can you tell us what will be different from previous versions, such as Jane’s and the GraphSim versions?

GT: Accuracy of flight and environmental dynamics; the flight model is based off of real FCS data from NASA. Also features a clickable cockpit.

531 Ghost: Please tell us about Seven-G. How did it get started?

GT: As As for the team, it is pretty simple. “Metalsw” had originally been working on the simulation as a hobby project. I gained knowledge of his accomplishments and knew that there was potential in making this into a great simulation. I didn’t want to see it die like so many other projects out there, so we got together and about a month later we had launched the project publicly. We created the name, web site, and released the first demo for download. This happened in July 2008, and within a week the word had already spread. From there on we started to recruit members to the team, which didn’t take long to happen. All three additional team members were added around the same time — about a week after launch.

531 Ghost: What is the vision and the scope of the Seven-G project?

GT: Primarily, to maintain accurate flight and operational modeling specific to the Hornet.

531 Ghost: What are some of the major stumbling blocks? 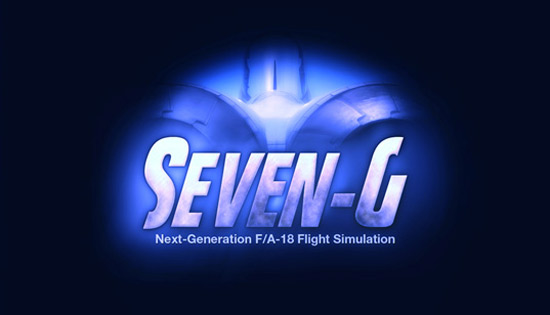 531 Ghost: Tell us about the multiplayer aspect and how important it is to the team. First, will it be implemented, second will there be player created missions, and third, what about co-op play? Will they be canned multiplayer missions or will there be the capability for mission builders to build missions and fly them with their friends online?

GT: Yes, multiplayer is planned to be implemented. Users will be able to create their own missions via the mission builder. Co-op will mostly likely be implemented along with multiplayer, when that happens. Multiplayer is quite a dynamic turnaround from an ordinary single player game, so we think that by implementing it, this will expand Seven-G’s already outstanding potential as a simulation.

531 Ghost: Let’s talk about single player mode. We assume there will be canned missions. If so, how many? What about campaigns? Are there any, and if so, how many? Are they branching or dynamic?

GT: Those so-called canned missions will mostly be for training purposes (strafing, bombing, ACM, etc.). A mission builder will also be included for single player mission building. In regards to campaigns, it is planned, though as of now still a distant task to be completed. Top priorities are to finish the sims engine, then the mission builder, and then add campaigns. The type of campaigns has yet to be decided.

531 Ghost: What will players be able to accomplish in single versus multiplayer modes?