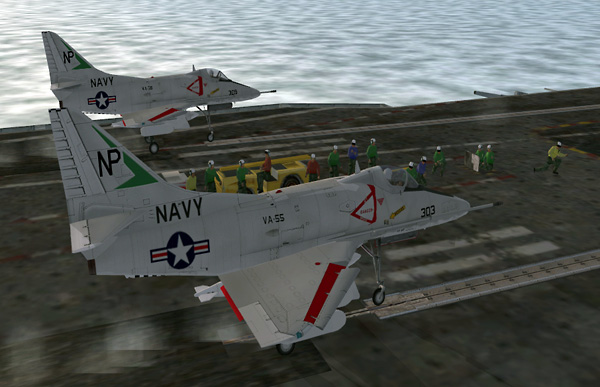 A Tale of Two Operating Systems

We received the installation packages that included a brand-new copy of Wings Over Vietnam and the Yankee Air Pirate 2 installation disk.  We intended to try them both on Windows XP 32-bit and Windows Vista 64-bit. Installation was straightforward. You install the game and then install the new content into the same game directory.

On the YAP 2 CD you will find a document called “THE DIRECTIONS”. Don’t just read this, print it out for later reference and save yourself a whole lot of wasted time and “what did they say?”

“20mm” had no problems installing, patching (but he did not install version 08.30.06 either) and running on his Windows XP based system.

“PFunk” had a bit more fun using Windows Vista. He discovered (and passed the info on to the YAP2 team) that you can patch to the version 08.30.06 standard with Vista, but you must disable the water shaders. If you do not, you will get a crash to the desktop every time.

There are three different versions of the “data.ini” file in the terrain and the YAP2 team will include instructions and files on how to get it work. Look more more details on this at the Yankee Air Pirate web site and in their new developer forum on SimHQ very soon.

Once the separate installation folder was prepared, the Oct 2008 patch became no longer necessary to run the game. It did just fine using the previous patches as long as the terrain ini files were properly edited.

Again, until the water shaders editing information is available, do not patch the game up to the latest version if you’re running Vista.

One other thing Vista users should do to insure being able to use weapons is to download the latest Weapons Editor and re-save the “Weaponsdata.ini” file to insure everything shows up. One little click will save you countless headaches.

We do highly recommend creating a separate installation specifically for YAP2 as it tends to interfere with the normal operating procedures of the campaign, single-missions, etc. Many of us have mastered the art of multiple installations, and it wasn’t terribly difficult to do it again for this title.

Let’s review that process on how to accomplish a multiple install: