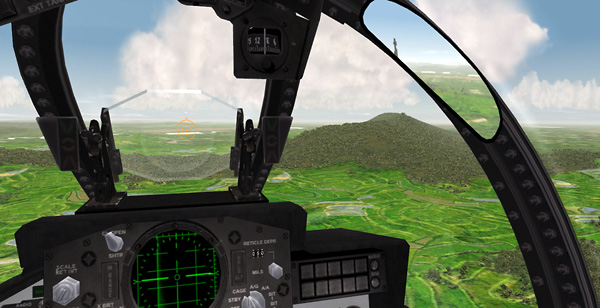 Visual aids have been kept to a bare minimum. Gone are the colored squares to indicate what target you’ve locked onto, replaced by a single, very-hard-to-see dot over targets and waypoints. Get used to paying attention to your instrument panel a lot more.

New features include a very well-rendered visual of the Southeast Asian countryside. Trees now abound where there used to be nothing but featureless ground. The new, verdant tile set looks much more convincing from altitude to be triple-canopy jungle. Carrier operations, long a favorite of combat aviation enthusiasts, has also been given a serious boost from the use of individual ships, not just a class of them as we’ve been used to. When you’re on the deck of the USS Coral Sea, you are on the deck of the USS Coral Sea, not the generic stock aircraft carrier with a different number slapped on it.

While we’re on the subject of 3D objects, you’ll find the installation chock-full of custom-made objects, from the crowded and busy ramps at the airbases to the carrier decks with all the aircraft, to the towns, the target areas with many things that can hurt you, all in great detail. It’s a very busy war out there and YAP2 does the ultimate to bring that sense home. Oh, and by the way, don’t let your wingtip hit that aircraft next to you on the ramp. It will spoil your day. Thanks to the creative mission editing by the YAP team, you can also do neat things like taxiing out of open revetments and hangars. 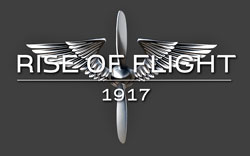 One thing that we thought was a nice touch — city lights at night. Finally, we get to see in this sim the occasional street light that wasn’t snuffed out at night.

One of the things we did was create a dummy installation to see just what was changed and what was added. The terrains and objects have numerous changes done to reflect a more real-world representation of what the world around there looked like.

The briefings are still the quality that previous customers of the Yankee Air Pirate series have come to expect. You feel compelled to fly the mission, taking you beyond the sterile, stark text in the stock installation and bringing you into a world of desperate actions done by the men who were there.

The layout of the menus remain the same as Wings Over Vietnam. 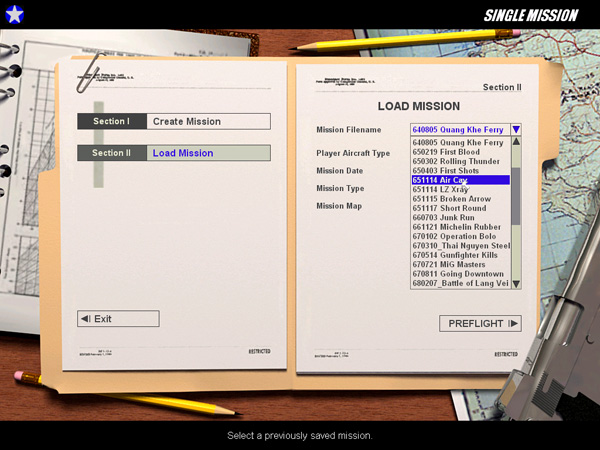 Customers will get an account on the YAP2 web site, where they will have access to briefings, photos, maps and all sorts of various and sundry things to assist the virtual pilot to immerse themselves into the world of combat operations over the skies of Vietnam. Great attention to detail has been paid in the preparation of these briefings and are more than well worth your time to review them previous to going wheels-up.