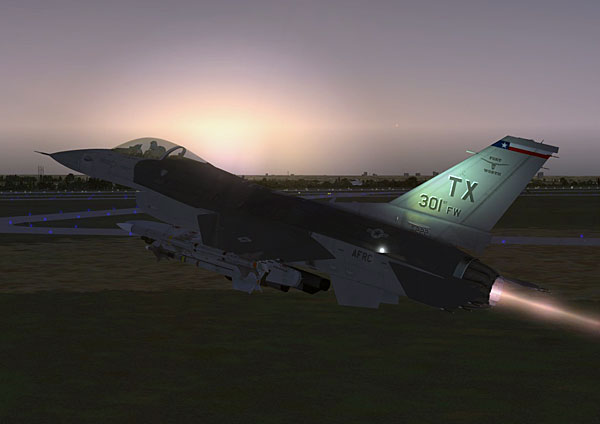 My previous experience with FSX “payware” aircraft seemed to often leave me disappointed. Maybe I was grabbing the wrong planes from the wrong developers. When I first saw the Aerosoft F-16 I was thinking that the quality was probably about the same as some of the better freeware, so I really didn’t expect much. My impulsiveness got the best of me after seeing a screenshot thread that discussed the Aerosoft F-16; I thought “what the heck!” and purchased the download version. Download versions of software are a nemesis to the wallet. My FIOS connection made short work of the download, and summarily satisfied my “I need it now” compulsion.

Installation went quickly. After a succession of “yes”, “yes”, “ok”, “install”, “yes”, and “I agree” it was done. A far cry from the good old days of add-on planes for MSFS with copying and pasting what seemed like an infinite number of files of similar names into a multitude of sub-folders.

As with other FSX planes, the F-16 and its variants display on the plane selection menu.

There are a lot of skins included with the Aerosoft F-16. Additionally, there are 3 different models of the plane included: the A, the AM, and the C. I can’t speak to any 3rd party skins or their quality if there are any available. I’ll have to look into those at some future point.

Like the kid in a candy store, I grabbed this one! 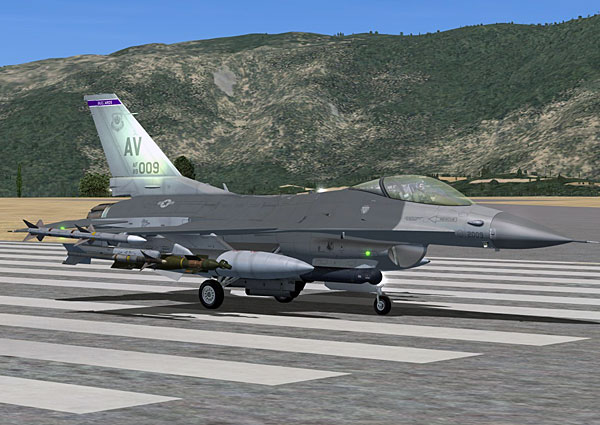 Once inside the cockpit, you realize the amount of detail work Aerosoft invested to make the plane exceptional. I decided not to read the enclosed manual before my inaugural flight because I was anxious to get into the air (shame on me).

Being new to the aircraft’s avionics and controls (I’m one of the few flight simmers in existence who flew Falcon 4 infrequently) I flipped and fiddled with the myriad of working switches; I finally got the MFD’s and HUD working. Sure I could have just picked-up the manual and learned where everything is, but what’s the fun in that!?

After years of freeware that represented the “it’s good enough for government work” attitude, the Aerosoft F-16 has spoiled me. No jaggies or ill-fitting panels here! 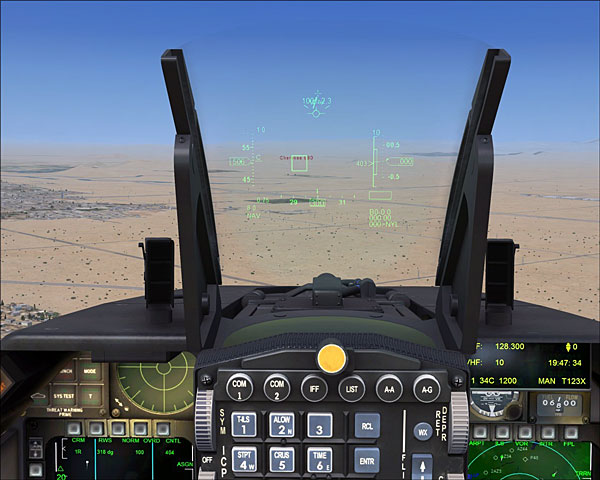 Click here for a Flash screenshow of the various control panels
and avionics provided in the Aerosoft F-16.

As you would expect, everything is clickable and works. That’s one of the great features of the MSFS series that I truly love. The video below shows the F-16 “buttonology” at its finest!

Time for take-off! First time up was okay as I buzzed around wondering “what does this do?” Okay, I give up. I paid enough for this nice add-on so it is time to read the PDF manual and learn to fly this bird correctly. While not as complex or in-depth as the magnificent documentation provided in DCS: Black Shark, there was a lot of information to retain. You can download the PDF manual from the Aerosoft web site here. Other languages are available on the Aerosoft F-16 product page here.

When I went to the Aerosoft web site to check on what all was included with the aircraft, I saw the mention of 2 included missions. There is also an F-16 mission pack available here. I’ll look into that at a later time.

There is an air-to-air (ATA) radar mode included, but no audible sounds for lock that I could detect. Just the green square around target. There is no air-to-ground (ATG) radar mode — the pickle button is non-functioning. A shame. Maybe FSX can’t be “faked” into simulating an egg drop.

Regarding loadouts, in the variations list some are clean, ATA, or ATG loaded. In the manual it states that the flight models are different depending on the loadout and weight. From my experience i believe this is so — an empty configuration is highly agile and takes off quickly. The loaded-down configurations take up more runway as well as being less agile in the air.

Since I am not an F-16 pilot, I cannot give an accurate opinion of the flight model. But it felt like what I would expect in flight for a by-wire fighter. 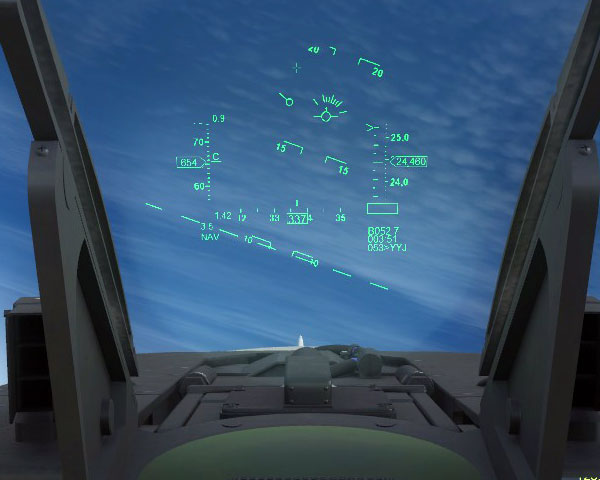 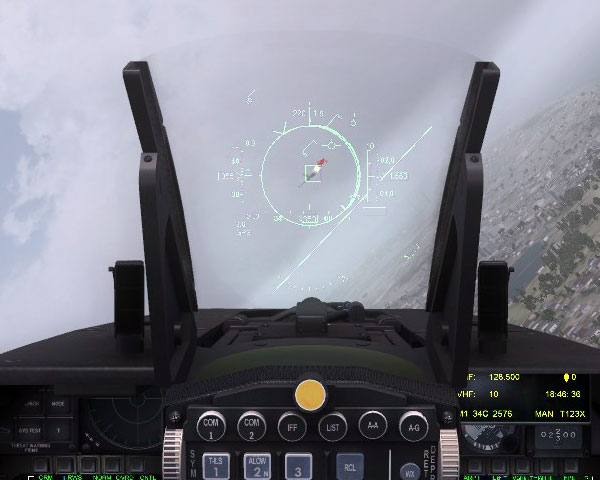 The first mission is to escort Air Force One into Honolulu. Maybe Barack was there to visit family or friends. The mission is not hard, but it was challenging trying to keep my F-16 in the vicinity of the 747 without overshooting it. 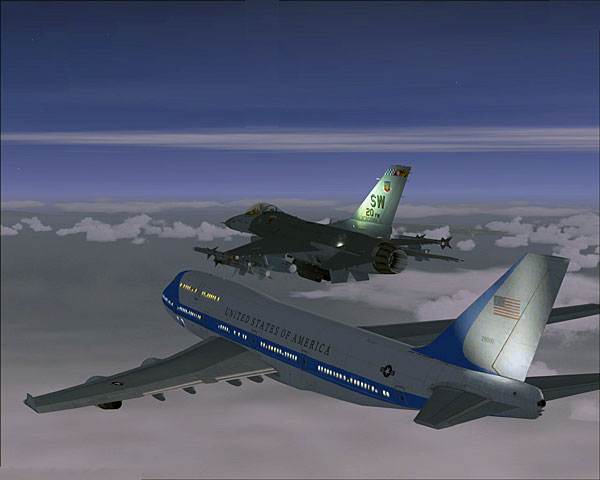 Mission 1 – Barack (and you) fly west

The second mission was an interception of unknown bandits heading towards Honolulu again. Strange, since I was flying a Shaw AFB aircraft. But whatever, I was on my way. By not scrambling quickly enough I never did catch up to Blue Lead. Oh-oh… Simulated missile launches and the bad guys hit me. The engine shut down so I had to do a mid-air restart, which was interesting since I still did not know all the instruments at that point. Finally got it going again and joined my lead flight before landing at Hickam AFB. 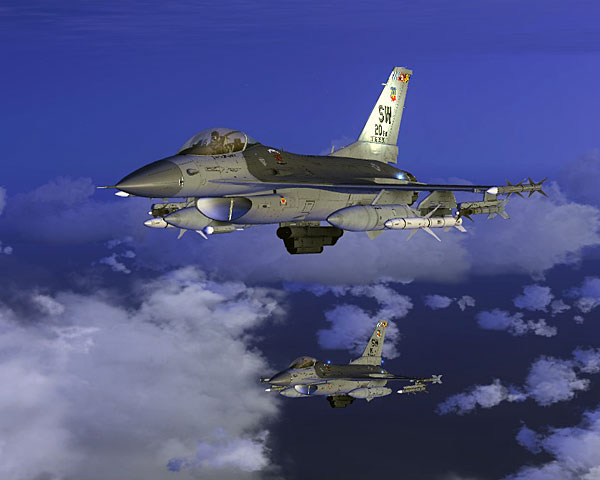 The Aerosoft F-16 is a great add-on aircraft with awesome attention to the details. It is certainly worthy of the $36.25 USD download version price for the level of professional work that you find in this add-on plane. If you are looking for an F-16 to fly in FSX, I highly recommend it. 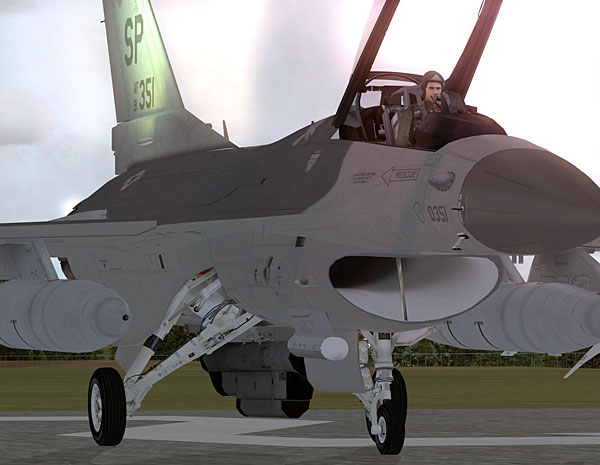 Click here for a Flash screenshow of external images showing the Aerosoft F-16.