The installation wasn’t entirely straight forward with Vista, as while the program itself was more than happy to plug itself on my hard drive, the supplementary programs (DirectX, etc.), halted due to UAC balking at giving them access. A quick “do over” running the setup.exe “As Administrator” put it right, though.

Rise of Flight requires registration of the simulation on their web site: one must enter an email address, the registration code that comes with the DVD / download, and establish a user name. This same registration grants access to their forums, allowing one to post (though one can register on their web site and post in their forums without purchasing the product). Registration on the neoqb web site for activation was quick and smooth for me. The product key is case sensitive, though (something I automatically assumed), which perplexed a few people.

The email address and password is critical to the workings of the simulation, as Rise of Flight requires a constant handshake with their servers in order to run. Volumes of Internet content have been written about the requirement for connectivity to play the simulation, so I’ll defer to the forums of any web site on simulations for discussion of the matter. One does need to be aware that the connectivity requirement is there, however.

Effectively, there is no offline mode to Rise of Flight, and a broadband minimal connection speed is required. Dial-up connections need not apply. 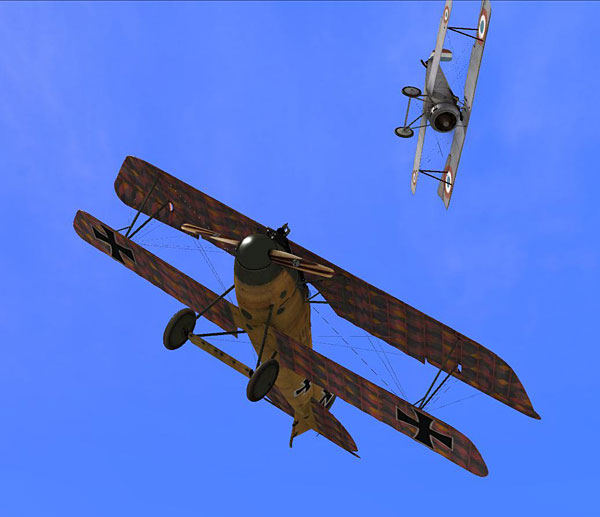 Setting up the sim is crucial to the type of experience one will have with it; it is also the most difficult part of the simulation in many ways.

First, the options and controls GUI is separate from the simulation itself, meaning that one must exit the simulation to change graphics, sound, and key binding options. One doesn’t really know the best bindings for keys until one is in the air and figures out what’s most important or best for one’s unique preferences. For a short memory deficient guy like me, it means keeping a note pad and pencil handy so that I don’t forget the what-control-on-my-X52Pro-to-what-key command.

The frustration is compounded two ways: The “OK” button and the bind key window. 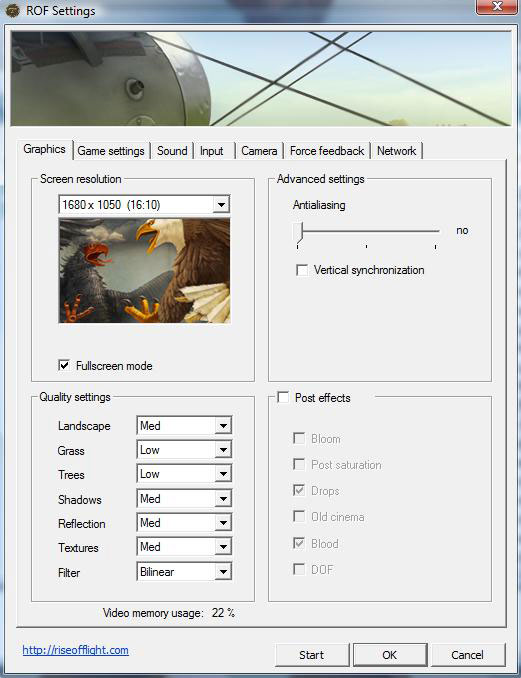 Selecting the OK button shuts down the GUI, which means the sim is shut down and one must double click the icon and re-start the entire sim. As much as I know it’s a booby trap, every time I make changes on the screen I reflexively select the OK button as if it’s a “save settings” button. And curse.

Rebinding keys is likewise an exercise in frustration, as when one selects “Change” the mouse is over the “Change” box and the windows are grayed out as shown. 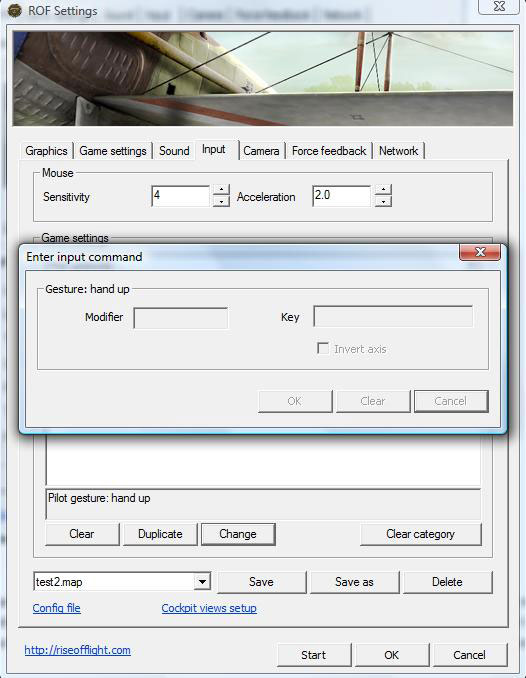 It’s instinctive to move the mouse to select the empty box, which gives one this: 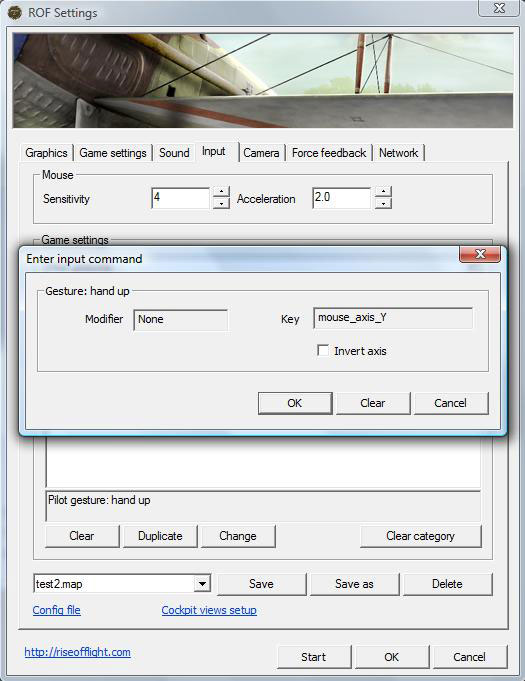 To fix this, one now must move the mouse to select clear and not move it one pixel after clicking the left mouse button or it will input a mouse command again. It becomes something of a game in and of itself to release the mouse with one’s hand without moving it an iota. Good thing we had the dexterity-building Operation game when I was a kid!

In the latest release as of this writing (v1.006), the “Service” commands seem to be unchangeable — “M” is always for the map. Bind anything else to “M” and it will also bring up the map, even if one attempts to unbind the map key.

That said, there is some goodness in the setup options. One can set up multiple inputs to do the same thing. For example, I wanted to put the pilot gestures on my joystick hat and still keep them on the keyboard defaults. Rise of Flight allows one to do this, which makes refining profiles somewhat fool-proof. I couldn’t decide which of the two rotaries on my throttle I wanted for the radiator control, so I bound both of them to the same function and figured out which was better for me in the air (and removed the one that I didn’t find as intuitive).

One can also save multiple controller configuration profiles, which I found to be very helpful. I actually built up my controller profile in chunks, working from engine and pilot commands to controllers, saving each one as a unique profile along the way. It was my way of having to go back to scratch when I reached the point of over-customizing the config file into an unworkable mess.

The breakdown of command areas is likewise very handy: 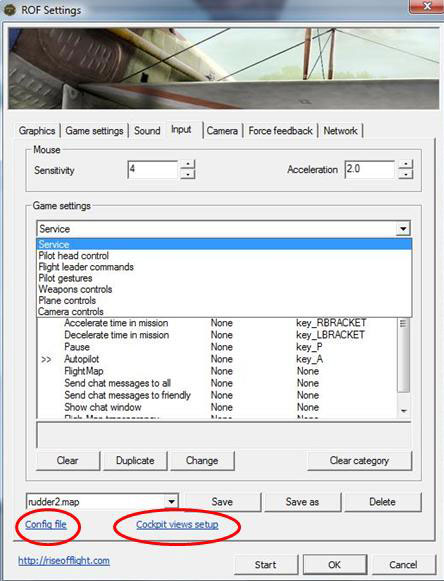 Note the red circles; they’re hyperlinks to neoqb web site pages that offer detailed explanations of the configuration file commands and the cockpit view setups, with diagrams to help the player get the most of the sim, particularly if one does not have a TrackIR™ unit.

Spending thirty minutes setting-up TrackIR will save hours of frustration within the simulation! Rise of Flight seems to be very literal on tracking; if the TrackClip isn’t in the center of the TrackIR unit’s tracking window, all sorts of foolishness happens. There are two videos I made for this review, and the first where I’m flying a SPAD shows the frustration of a unit where the TrackClip is in the upper right quadrant of the tracking window. The flashes in the video is the sim giving up on me and returning to the forward view, only to snap back to my TrackIR position as I move within its acceptable parameters.

The second video where I’m in the Nieuport 17 shows tracking with the unit centered.

It’s a preflight check to ensure that I’m well and centered with the TrackIR / TrackClip.

I also lowered the Z axis curve, as the head zoom was too pronounced to me, leading to a round of optically induced vertigo that left me with screaming headaches after about half an hour. To retain the ability to zoom, I bound my slider on the X52Pro throttle for that function.

Once one is set up, though, the Six Degrees of Freedom (6DoF) implementation within the simulation is excellent. I find myself rarely re-centering the TrackIR during missions.

You may have noted that my graphics settings are pretty low, but that’s my fixation with smooth frame rates that average above 35 in all situations. Rise of Flight is stunningly beautiful even under the lowest of settings to my eye, and I’ll forgo quite a bit of eye candy for performance. The latest update took much of the jaggies from the release version, enough to where even a jaggie hater like me is happy.

The graphics are more than just a nice set of textures in this sim, though; they’ve gotten the perspective of distance right, which means the sensation of altitude and speed are spot on. I’ve leaned forward and over the side of the cockpit on a pass of the aerodrome like a dog out of a station wagon window, all grins and tongue as I set up for a landing… and winced hard, pressed to the back of my seat as if the ground coming up that may be far too long on the grass and short to the hanger is quite real. 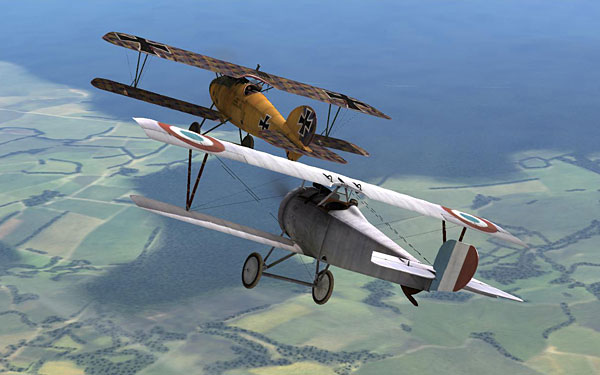 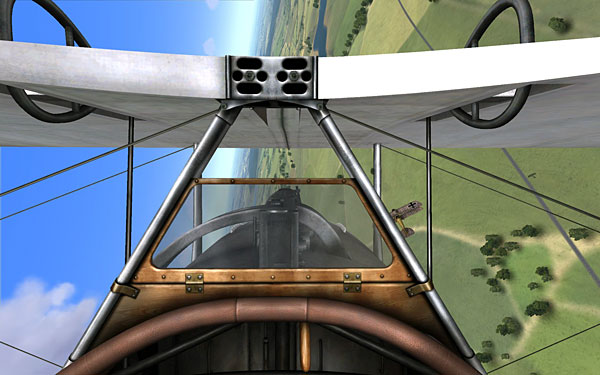 It’s a rare simulation that has one just sitting in the cockpit contemplating how close things were for a minute or so after a particularly hairy flight.

The only strange thing about the graphics is the draw distances. In Rise of Flight, the greater the zoom, the greater the draw distance. Enemy aircraft that are invisible at the widest perspective are quite clear at the smallest perspective at the same distance. It makes sense if one imagines using binoculars to bring things closer, but it’s the opposite of other simulations (like the IL-2 Series, where planes visible over great distances at the widest view possible disappear at closer ones). It also means that one tends to scan the skies in smaller chunks under magnification before a fight and then battle with the zoom pulled back (for more peripheral vision and screen display) for close in work.

Sounds in Rise of Flight are not just an immersion builder — they’re central to managing one’s aircraft. The sound of the wind through wires and the race of the engine over the noise are warning signs in planes that lack what we now consider basic instrumentation.

They are also some of the best implemented in any simulation I’ve ever played. Don’t go below medium sound settings — you’re cheating yourself!