If you’ve ever thought of flying a modern shooting helicopter simulation but were afraid of having to obtain an associate’s degree in avionics in order to do so, don’t be afraid of DCS: Black Shark. Jump in and buy it, the water’s fine!

I dislike “switch simulations” with a passion. Nothing sucks the joy from my soul quite like the word procedure in relationship to the operation of flight simulation, and referring to an aircraft as a platform is the height of insult in my book. It’s not the technical brilliance of the band and the craftsmanship of the floor that that excites me near as much as the woman I’m dancing with, after all — and it’s the only reason I’m there, to be honest.

Black Shark is the first true flight study simulation in a very long time, and the developers rightly pointed out all the highly technical details they crafted into their love child with excruciating clarity as they got it ready for release. They made videos and posts demonstrating the complexity and nuances of every subsystem and electronic whiz-bang to the point of intimidating the casually hardcore flight simulation nuts like me. One can actually test to see if gauges and dials are functioning properly before initiating a very long and detailed pre-start checklist.

That last bit nearly put me off getting the simulation. What, I wondered, if a gauge or dial actually failed the check? Would I have to restart with another helicopter, wait for maintenance to replace it (and if I’m stuck in the cockpit for more than an hour will they reimburse me for the flight or give me a voucher for another one?), or worse, have to fly with non-functioning dials and gauges?

I wanted a flight simulation of an attack helicopter, with the operable terms being flight and attack. I’m no longer a young man, and I don’t think I could endure the emotional scars that Falcon 4.0 burned into my soul without therapy this time around.

It turns out that while DCS: Black Shark is definitely a switchfest with all sorts of manual studying possibilities as detailed in Ken “531 Ghost” King’s review series (Part 1 is here, Part 2 is here, Part 3 is here, and the controllers setup is here) as well as fine forum threads on the matter. The girl can dance, and isn’t the least bit fussy about how technically correct one’s steps are.

DCS: Black Shark is a great simulation for guys like me, as just about everything that one encounters or needs is a very short list. Less than five percent of all those knobs and switches are used in over ninety five percent of all flying and fighting. The “less than five percent” of the time is usually moot in my case, as I’m most often far too low and far too fast to have time to correct whatever setting of switch or lever is causing the alarms and have left a long crater and fire on the virtual landscape shortly after the panel lights come on.

Before I get any further, huge thanks goes out to “Para_Bellum’s” fantastic thread “How to Take Off and Blow Stuff Up”. It’s pure gold, and one is cheating one’s self if he hasn’t printed it out and followed along with the thread’s mission.

I worked it out — there are only 16 selector switches in the cockpit and twelve keyboard commands one has to know in order to fly and fight the Ka-50, including engine start up and shut down, raising and lowering gear, enabling and firing weapons, and having fun. Most of those command requirements are linked and very easy to learn (or are typical of any flight simulation).

As with everything, some caveats.

First, I have always loved helicopters, and the principles and application of helicopter flight was the stuff that fed my fantasies of flight. While most kids dreamed of Spitfires or F-15’s, my loves were the UH-1 and the AH-1.

To this day I can’t completely eat an ice cream without first flipping the cone it came in over and visualizing it as the “lift cone” of a helicopter. When I got glasses in the fifth grade I kept my tears very private late that night, mourning for the loss of an Army Aviator’s wings that I would never, ever get. So the actual flying of a helicopter held no mysteries — I was supremely confident that it wouldn’t take but a few minutes to sort out the Ka-50.

Second, I planned on coercing the IL-2 squadron I’m a member of to buy DCS: Black Shark and fly online with me. Single player is okay, but the real fun in any simulation is tackling and sharing situations with friends. Most of them grabbed the sim without any prodding at all, though, and it’s been a real blast alternating between WWII and modern helo aviation with them. I also knew that my squadron contains some real manual readers, guys that would study and research the nuances for me. I could always rely on one of them to know the answer to an urgent need via TeamSpeak.

Third, I was relying on well-designed missions to do a lot of the heavy lifting for me. Good waypoints laid out in a logical manner for the tactics required under reasonable conditions (no snow storms, mountain climbing, or zero visibility stuff), flight durations well within fuel capacity, and the appropriate munitions pre-loaded.

With that out of the way, let’s look at the different systems.

Left Windows and Home keys pressed together is start up; Left Windows and End keys are shut down. Days of studying eliminated right there. Many will argue that understanding the systems that make the big fans on top go ‘round is of value in getting the most out of the simulation, and they’re probably right. But I don’t want to get the most out of my simulation, I mostly want to fly the helicopter and blow stuff up with it! I want to fly the CliffsNotes version, the one with all the unfiltered action scenes still in there and very little of the chapters dealing with character backgrounds.

It’s the “gooder enough” way of doing business, and it’s a mantra that has caused me to have large amounts of success with much less stress my whole life. It’s also very true that sometimes “gooder enough” means done precisely with a great attention to detail, in the main, the 90% solution will get one by without anyone being the wiser.

A prime example is the dust protector selector. It’s on by default using the automated start-up sequence, and fuel conservation should be turned off in normal flight. However, most missions are built well within flight durations to where the extra burned fuel really doesn’t matter — I’ll simply land with less fuel than my learned flight mates. Leaving it on means I won’t forget to turn it back on when I hover very low to the ground (or land).

In a fire emergency, the only real thing one needs to know about those levers and switches are the fuel shutoff switches (the big red levers in front of the collective) and the fire extinguishers on the right side of the cockpit. Fires need three things: fuel, air, and spark (or heat). Cut the fuel and dump Halon (or whatever the extinguisher stuff is) and it should go out. Restarting an engine that’s been on fire isn’t a great idea, so no need to learn how to do that.

I did learn where the de-icing stuff is at, though I’ve yet to fly a mission where it’s required. Yes, one of the stock campaigns has a mountain climbing mission, but I simply haven’t flown the campaign. I prefer to build my own missions or play single ones.

What is important about engine management is understanding the collective and throttle as well as how they relate to what the two rotors are doing. You only need four controls (throttle, collective, stick and rudders) and four instruments on the dash (airspeed indicator, tachometer, turn and bank indicator, and variometer) to keep things running smoothly.

When the throttle is in the “auto” position, it’s linked to the collective. Put more “bite” in the blades by raising the collective and one automatically increases the throttle in order to give a proportional amount of increased torque to keep the blades turning at the appropriate RPM. Most of the time I leave the throttle in the Auto setting, but there are times when I want a fine blade pitch and higher RPM’s or a larger blade pitch and lower RPM’s. Hard biting blades flex and bend more than relaxed ones, meaning that if one is going to fly aggressively, a smaller bite whirling around faster will reduce the chance of a self induced rotor strike (at least in my experience with the simulation).

If one has put the throttle on a slider, always check the position of the slider and move it to the desired position before starting the engine. Hint: the “auto” position is the notch below the little yellow bar, not the red line below it.

The important gauge is the RPM gauge on the left front of the cockpit. Stay between the red marks! Fall below the red mark and the generators on the bird can’t power combat systems like the Shkval TV camera, the flare dispensers, and the laser. Go above the red mark and you’ll blow the transmission. It’s this “feature” of the Ka-50 that most often has me going to manual throttle settings. 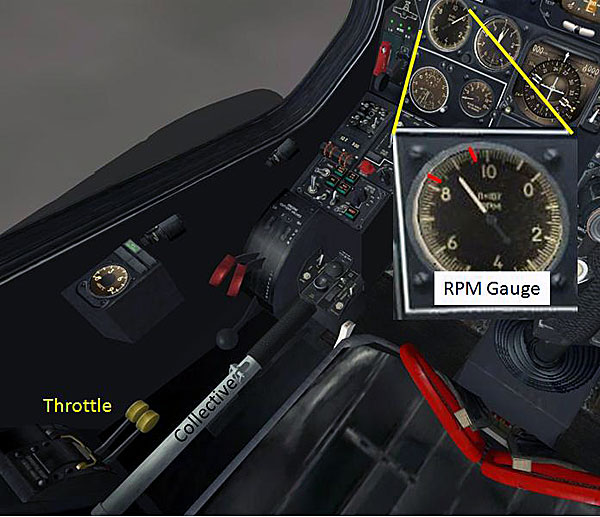 Remember that it’s basically a jet aircraft, so it takes time to spool up and down between large power change settings versus a piston driven engine. So anticipate power and pitch requirements as much as you can. Where your helicopter is right now isn’t nearly as important as where it’s going to be in two seconds. Fly two seconds in the future as much as you can.

Speaking of fuel, one needs to know where the fuel gauge is. It’s the one with the yellow dot in the middle in the lower right of the front dashboard.