This thing has a lot of functions, if one is to believe the developer’s videos. I have found that it really has only two real important uses, navigation and team orientation. 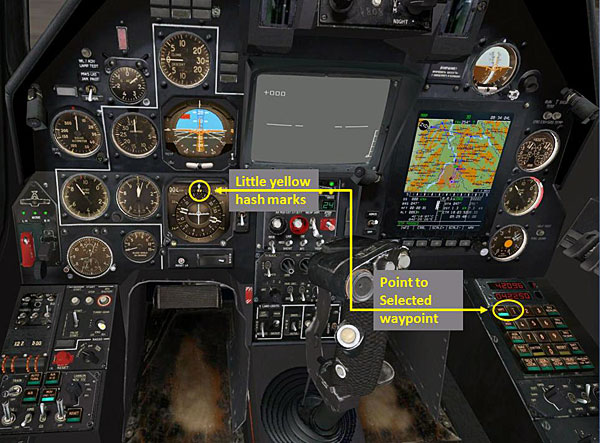 If one is part of a team, they will show up on the rolling map screen, as well as targets one has sent to them.

The otherwise important functions of the number pad device are taken care of by mission designers. Waypoints should be laid out already, and the helicopter should already be self-located and tracking properly at the start of the mission. Making new waypoints, refining self-location, and even target storage and recall are nice to have features, but ones that are largely moot in normal play.

This is something that one should be able to do, but it’s not rocket science and really doesn’t need the PVI-800 to do so.

Once one has locked a target, either select the type of target or simply select the right button in the middle row (send to all) and then the bottom right one to execute. Targets gain a number, starting from one, so I only mark really critical ones and make a mental note of the order I put them in.

Typically, I simply tell my AI wingmen to attack by target type and my human counterparts by voice direction, so it’s no really big deal either way. 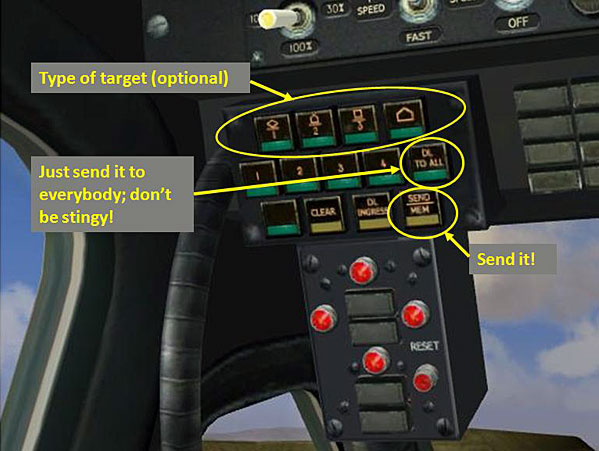 Probably the most vexing thing initially for a DCS: Black Shark pilot is target lock and weapons management.

First, turn on the laser and select the “moving target” button. It works on stationary targets as well, but not having it on won’t work on moving ones.

Remember, if the RPM’s go out of the red hashes, one has to press the “reset” button on the laser and the “moving target” button again.

Second, turn on the “Master Arm” switch. Forget the realism of only arming a helicopter after takeoff; arm it as soon as the engines are spooled up, before takeoff. 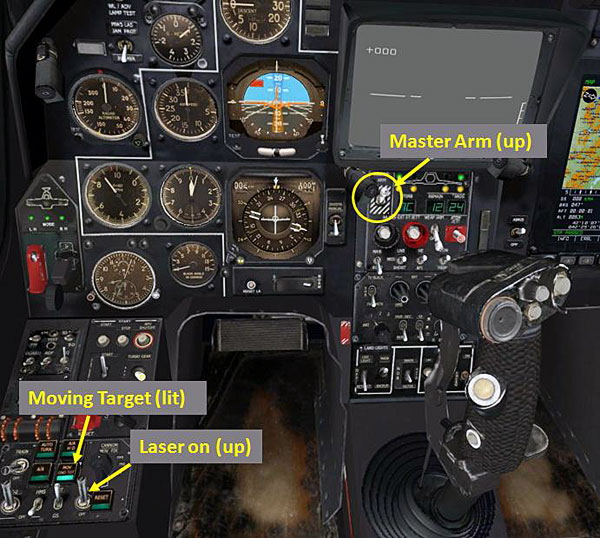 The simple way of finding and locking targets within the Shkval TV screen is to use the helmet pointer (“h” key by default) and the Shkval pointer (“o” key by default) to work target location and fix, along with a hat for Shkval pan and a handy key for zoom and lock. On my X52Pro I use the “C” button on the stick for the “o” key, the hat in front of the throttle for slew, and the rotary to the left of that hat for zoom in and out, with a press of the rotary for lock.

Initial target location is a function of using the Mark One Eyeball for me, looking for black dots and small squares. Nothing in nature presents a straight line, and boxes are a product of human design. I then put my helmet circle on the black box, press “o” to get the Shkval pointing close to it, and refine with the hat. I usually work zoomed out until I have the target I want to lock, then zoom in and lock.

Caveat: a long, long time ago I was an Artillery Forward Observer and learned Warsaw Pact vehicles by nomenclature and silhouette. I don’t use labels (they are counter-productive for me), but until one learns what vehicles are more dangerous than others for prioritization, it’s not a bad idea. The rule of thumb is that if it is as tall as it is wide, kill it first — it’s carrying some sort of radar or missile.

The standard munitions are the laser guided missiles on the outer pylon, which are selected with the “Y” key (NP shows in the red LED readout), the dumb rockets on the inside selected by the “I” key (HP shows), and the cannon, which is selected by the “C” key (where only the round counter on the right displays). There are a host of other ordinance load outs, but in practice one sees the same bog standard load in every single one.

The laser guided missiles rely on the “big circle over the little circle” theory of use, with a maximum range of seven kilometers. “TA” on HUD or screen is lock, “C” is locked and in firing profile, and the number countdown is the calculated time on target. One can shoot stuff without a “TA” lock, but has to manually keep the little square pip in the center of the screen on the target.

That little rectangular pip can be made bigger and smaller with the bracket keys by default.

Dumb rockets can be fired two ways: on a locked target or locked straight ahead. It’s really the same thing, but when one has locked a target there’s a nice target circle to put one’s rocket pip inside of, and it will let one know if it’s in range for predictable effects. Otherwise, just fire from the fixed rocket pip or, if the whole front end of the helicopter has been shot out rendering the Shkval useless, the little pitot tube sticking up in front of the HUD as an aiming rod.

Cannons can aim at the Shkval rectangle (locked target or not), and are selected by pressing “C.” Nasty little feature of the Ka-50 is that one has to deselect cannons by pressing “C” again in order to use another munitions. One can fire straight ahead by pressing the “P” key and locking it in place; if you’re shooting at another helicopter, you’ll want to lock it steady. Note that the cannon is on the right side of the aircraft, so one has to point a bit left of the target.

One does have to be aware that there are two different kinds of cannon shells, each firing at a potentially different rate of fire. The default is High Explosive (HE) shells at High Rate of fire; the second type is Anti-Personnel rounds and the option of a Lower Rate of fire. Both types can be selected for different rates of fire. The AP rounds actually do pretty good on soft skinned vehicles as well as troopies. The switches are located under the LED munitions count readout in front of the stick.

And that’s it. Keep the nose pointed at the target when firing the laser guided missiles and keep steady on the pip when firing rockets, as they disperse in the same way one is flying.