Hola, flight sim fans! Today I get to be your on-the-spot reporter, with a very first in-person look at The Fighter Collection’s new A-10C simulation, and CH Products’ companion A-10 HOTAS! TFC and CH Products are showing at I/ITSEC, which is the foremost show for military simulations in the world. A large part of the business for both these simulation industry giants lies in the military sphere, and thanks to military dollars, some of that combat sim goodness makes its way to the private sector.

It is no secret that flight sim development legend Matt Wagner is now the U.S. Representative for TFC, and he, along with Eugene “EvilBivol1” Bivol, who also works for TFC now, put the A-10C through its paces for me. Keep in mind, fans, that what I saw is the early-alpha build of the The Battle Simulator, or “TBS,” product. This is destined to be a military product, not for general sale to the civilian sector. In other words, us. Regardless, I also was told that the military product and the civilian product are going to have about 80 to 90% similarity! Take that as you will, my friends, because if we get 90% of what I saw today, hold on for some of the most realistic combat simulation you’ll ever fly. 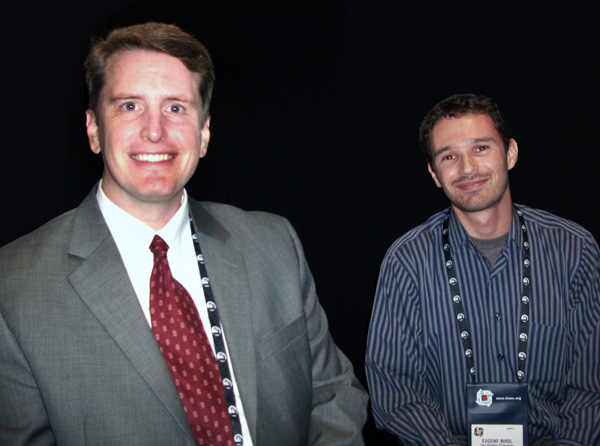 The driving force here for Uncle Sugar is the cold, hard fact that the much loved A-10A Thunderbolt II is getting long in the tooth and is in desperate need of an upgrade. Though one of the hardest-pushed platforms in U.S. Air Force service, the truth of the matter is that the last airframe was built in 1982, and even with upgrades, the A-10 is 1970s retro-tech. Enter Lockheed-Martin’s A-10C concept. Basically, this takes A-10A aircraft and upgrades them to the standards of the present-day combat-support arena in which it fights. The cockpit is upgraded to two multifunction displays, and functionality approaches that of the Block 50 F-16C, which coincidentally also is a Lockheed-Martin product. Uncle Sugar needs low-cost solutions to train his pilots, because every minute in the air is expensive. Training is everything, and nowadays even conventional simulation time is not cheap. So, the military procurement system and some good old civilian common sense have combined — our good old desktop sims are going military, and that’s got to be good for us.

TFC’s version of the simulated A-10C for our military customers has pretty much everything and anything you’d expect in this second-generation ground-pounder, and CH’s companion controllers do not disappoint. Even though both are aimed at a military customer, you’d have to be deaf, dumb, blind, and stupid not to see the potential for civilian bucks here for both companies, and we already know that TFC hasn’t forgotten us. Let me hit the high points.

The first thing I did when I arrived at the Orange County Convention Center was flash my press credentials to get an entree into the exhibitors’ arena early, before the general release of attendees into the area. The exhibition hall is huge, and there are representatives from every defense contractor on the planet, as well as simulation names such as Electronic Arts and TFC. I couldn’t take photos of the entire exhibition, it’s prohibited — but I got special permission from CH Products and TFC to take the shots accompanying this article. TFC and CH Products are sharing a booth, and the first thing I did was put my hands on the new controllers for the A-10C that are designed for military applications. Debby McDowell, Director of Sales and Marketing for CH Products Simulation Division could not comment on whether there would be a civilian release, but did indicate that the military controllers are USB-based and a civilian release would not be difficult to do if CH chose to release one. If you want to invest the dollars, you too can buy the military version. Michael Sexton of CH put the system through its paces for me and explained how it works. You can make the system do pretty much whatever you want it to, and it looks to me like something that would easily translate into a low-cost, high-value system for civilian applications, if CH goes that way.

It’s interesting to me that for both TFC and CH Products, the plan is, essentially, to use the kind of technology that we see in civilian sims to lower costs for military applications and increase utility at the same time. The HOTAS stick and throttle they’ve developed for this military application is, frankly, one of the better desktop-type controllers I’ve seen. It’d be popular if it ever went civilian. It has a robust, tough feel to it, like “falling off your desk a few times wouldn’t dent it” tough. The buttons and switches on the stick and throttle have “feel” to them; they don’t feel cheap and plastic, rather, they take some user effort to move them and have a positive “click”-ing feel as they slide into their various detents and positions. 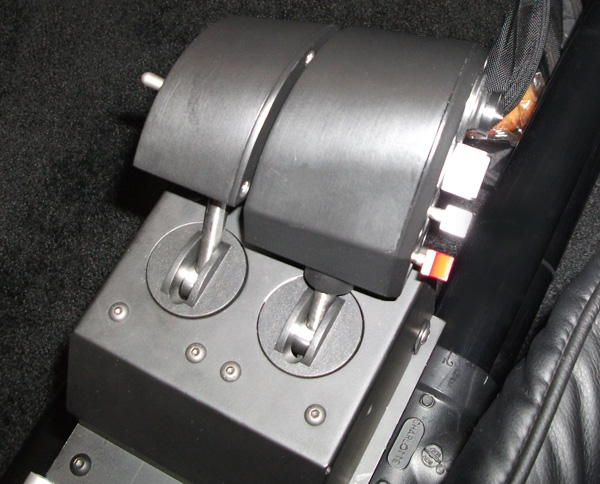 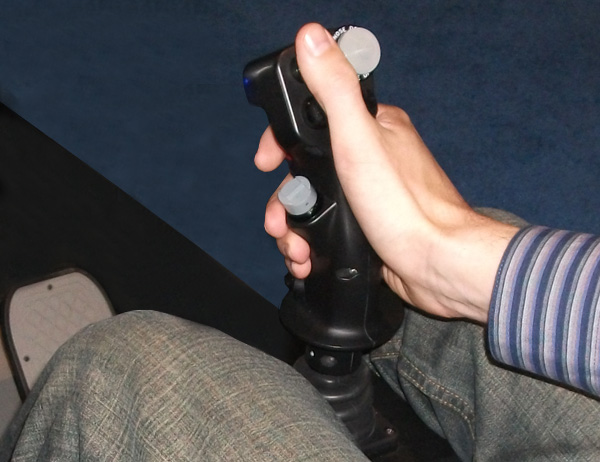 The split throttle has friction resistance that feels solid, and the two engines can be independently controlled. My favorite function is located in the trigger on the flight stick. It has an intermediate detent — you squeeze it in, and then add more pressure to get it through the stop to fully depressed. That equates to a gun-firing function in the actual aircraft-basically, you squeeze the trigger to the first stop, which designates a place on the ground that the aircraft’s autopilot will try to stabilize and fly you to. Then a heavy squeeze through the stop fires the gun. TFC’s military A-10C sim has the ability to replicate this, in conjunction with CH’s controller! Imagine if you ground-pounding buffs ever got your hot little hands on that level of control. Start writing your letters now!

The base of the throttle and stick are metal, not plastic, adding to their solid feel, and the stick also gives resistance, as it moves in each dimension. The setup has rudder pedals, and I’m not used to those, but like the stick and throttle they don’t feel loose or mushy. I really liked the setup.

The A-10C shines brightly. The first thing that jumps out at you is the amount of detail in the cockpit. Every single button you see is mouse-clickable. In addition, the HOTAS setup commands up the various modes for avionics though the buttons and switches on them. You pretty much never have to take your hands off other than to raise and lower the flaps and landing gear. It is all here, friends. Every gauge responds. Every display works. You can go through the same startup sequence as the real A-10C, from APU start, to programming the INS, to the menus that pop up in the HUD, you name it and they do it. The aircraft itself is fully articulated, even the fans in the engines spool up and down as you put in throttle inputs. Super-detailed. If they ever brought out an Su-27SKM with this level of detail — heck, anything like this level of detail — I’d have to get back into flying more frequently! Believe me, I lobbied while I was there! 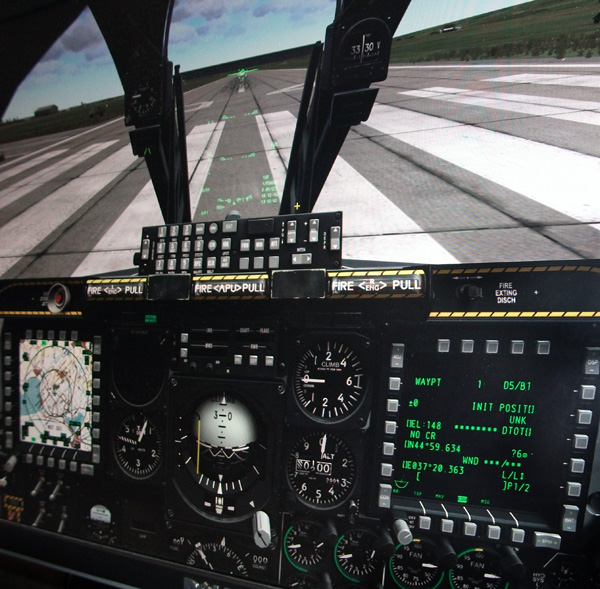 Weaponry is that allotted to the actual A-10C in actual practice. Fourteen different kinds of rockets. Every dumb bomb the A-10C is flight-qualified for, from Mk-82AIRs on up. GBU 12s with realistic, CNN-quality targeting. And JDAMS you can designate and target from in the cockpit. Don’t forget the four variants of Mavericks, also.

The A-10C flight model feels good to this non-pilot. I got behind the stick, and with a full load of fuel and munitions, this baby’s a dog till you get in the air. You’re not going to get off the ground in ten feet with a full loadout, just like in the real deal. I crashed on the first try, thanks to a user-induced problem with the NaturalPoint TrackIR™ setup (yes, readers, full 6-degrees-of-freedom TrackIR), but once Matt and Eugene stabilized the view for me, I firewalled the throttles and the bird… reluctantly… left… the.. ground. Once the gear and flaps came up it responded as you’d expect a heavy, max-loaded bird to fly. It feels good,  like the Su-25T’s Advanced Flight Model in Flaming Cliffs, but Matt tells me that the A-10C in TBS has an evolved version of the AFM that’s even got even more fidelity than the Su-25T had. And this flight-model stuff is going to make it into the civilian game, my friends. The difference between the military product and the civilian product is really only some symbology issues and radar-warning system functionality that is classified, and we won’t see that. Get this: the navigation system uses real aviation charts.

Sounds are a step up from what we’ve heard in the past from TFC offerings. In fact, Matt tells me that an entirely new sound engine is being employed, and it’s a distinct improvement all the way around. Sidewinders growl like you see in videos. The engines have a “turbofan” whine to them, and you are under no illusions as to when they spool up and down. There is lag between your command of increased throttle and the engines spinning up to meet that. You see that in avionics also; the targeting pod, for example, spins up before it displays, and it gives the message to you on the MFD that it is “timed out” if you try to get it to display before it is ready.

Due to my daytime job commitments, I have not flown a sim more than a few minutes at a time for quite a while, and I feel that once I got the switchology down I could employ weapons effectively in TBS A-10C. It’s intuitive and if you’ve flown current versions of Falcon 4.0 you will recognize that functionality. Bomb modes CCIP and CCRP are both present and both work as you’d expect. You can set bombs for ripple modes and timing, much as in F4. You can do the same for the rocket pods.

But wait: there’s more. How would you like to see an AI tactical ground controller that will mark targets for you with smoke and give you a full 9-line brief? I saw it, guys. Artificial intelligence for wingmen is enhanced over what we’ve seen in the past, and you have more commands than ever before. Similarly, AI on the ground is commensurate in detail with their looks — they aren’t just eye candy, they’re here to play. You can see tanks rock back on their treads with recoil, and guns recoil in their carriages, and they do look for targets. 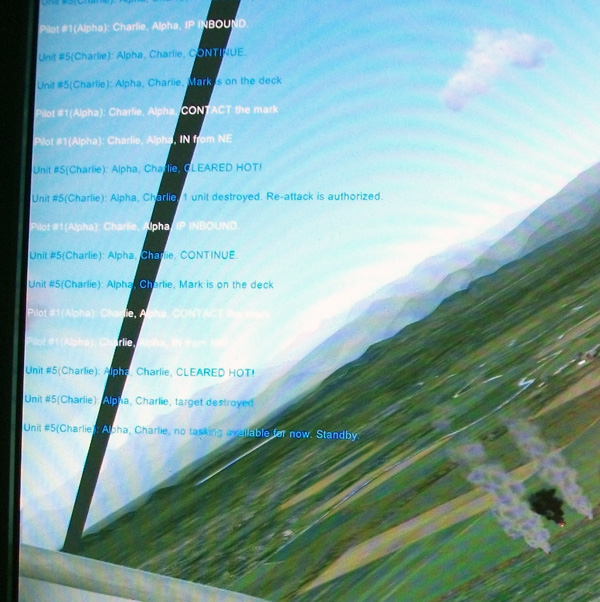 Level of detail in the world is up, as well. Several airbases are modeled to their real-world counterparts. This is something we ought to see in the civilian DCS version of this simulator when it comes out as well. I was not able to get details like the civilian campaign system, or anything else that military buyers aren’t interested in. Frankly, I wasn’t that concerned about the campaign system, because even if it’s the same thing as we’ve got in DCS: Black Shark it works fine for most folks. 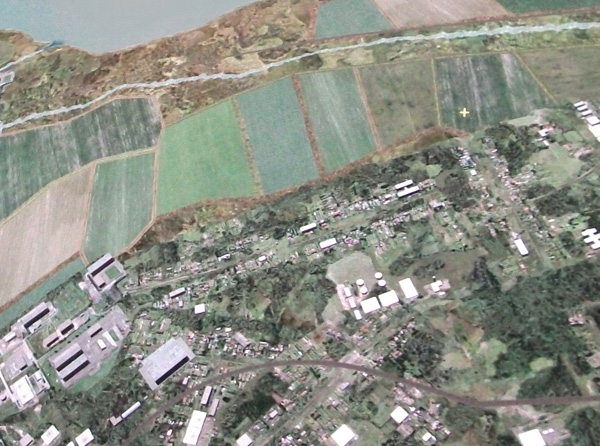 I got to rub shoulders with Dr. Igor Tishin of Eagle Dynamics, and Jim Mackonochie from The Fighter Collection, and though I can’t relate much of what they passed on to me, let me just say that some exciting things are in the offing for the future of the DCS series. TFC and Eagle are committed to the product, as they’ve always been, and we have every reason to expect great things from the label. They’ll have a winner with A-10C, and I hope CH Products takes note and releases a civilian version of the controllers — because if you’re serious about DCS: A-10C Warthog you’ll want it. 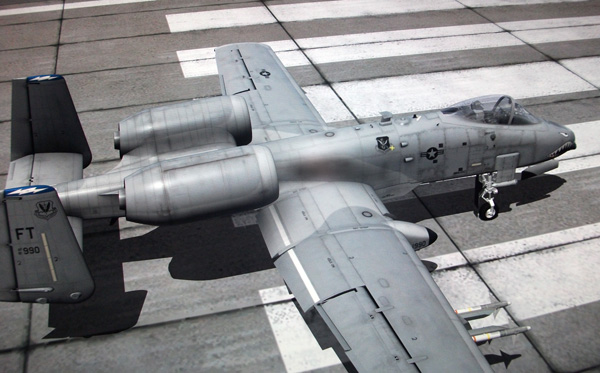