My Journey from Sim Pilot to Sport Pilot

Every virtual pilot is convinced that he could, in a pinch, take the controls of a light aircraft and credibly fly it to one degree or another. Owing to my poor skills in flight sims, I’m in the “another degree,” convinced that not a lot of what we do with our TrackIR’s, HOTAS, rudder pedals, and wide screen monitors would translate to actual piloting.

Like a big bunch of us, I actually got into flight simulations because the time and expense (and in my case as a career soldier, transient nature of my job) involved was impractical. It was (and still is) a great way to satisfy the need to slip the surly bonds of the earth and soar into the heavens on the cheap. Since retiring from the Army, however, I’d taken to wistful looks, long silences and the occasional sigh as the fifteen year backlog of “honey-do’s” was reduced to just one volume of the encyclopedia. I had the time, wasn’t going anywhere, and my son is now a teenager. After about six months of this my wife finally became frustrated enough to demand I just spit it out.

“IwanttogetmysportpilotlicenseandbuildareplicaNieuporteleven” came out just like that, as one word. Amazingly enough she didn’t just laugh at me; she knows that while ninety-nine percent of the time I’m a devil-may-care spontaneous type of person, on the Big Thing I am a meticulous planner with time lines and contingency plans with a dogged sense of determination.

“Are you going to tell me?”

“Sure. Let me print some stuff out and clear forty-five minutes for me; we’ll use the white board in your office.”

“Can’t you just tell me?” she responded, giving me that what a weirdo! look that is a common theme in our thirty year friendship (and fifteen year marriage).

“You like babble speech that runs on and on? There’s a lot of moving parts.”

Old habits die hard, and at the appointed hour she got a three page reference packet and a thirty minute desk side briefing with ten minutes for questions. It was great to be able to lay it out in a coherent manner and get pointed feedback — it was a very businesslike exchange, and at the end I got a green light with complements for having a solid plan including the financials.

A Sport Pilot license is the lowest level of license for flying available (barring ultralights, which require nothing more than a driver’s license), and suited my goals to a tee. The restrictions are, in a nutshell, Daytime Good Weather Away From Big Jets. Visual flight rules, stay below 10,000 feet, single engine only, one passenger max, no night, no instrument flying, and stay out of metropolitan areas in small, light sport aircraft (LSA) that don’t go fast and stall at really low speeds only. If one wants to fly the length of the country at 65 knots indicated airspeed, go for it — cross country is unlimited. Stick and rudder flying using the Mark One Eyeball and a few instruments to keep one straight is the rule of the day. 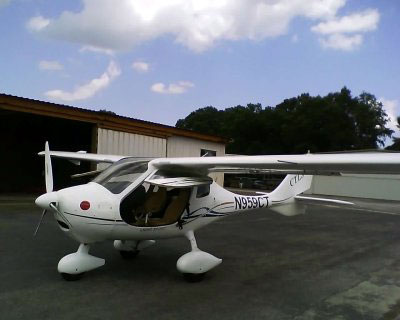 Since I have zero desire to fly at night, in adverse weather, low visibility, and plan on building a single seat, open cockpit aeroplane there seemed little reason to pay for forty hours minimum flight time when I can meet my needs with a license that only requires twenty.
Step one was to ensure I had enough lift generation to allow an aircraft to leave the ground. Forget what you may have read about Bernoulli and Newton and the whole “lower pressure over the wing causes a vacuum which forces the air down, making the plane go up” crap they’ve filled our heads with. It is Benjamin and Grant, in the form of their likenesses printed on many slips of paper that cause heavier than air objects to cheat gravity (in truth, it won’t cost much more than my super-duper desktop, HOTAS, pedals, TrackIR4, etc., etc., but that money was already spent.). So I took a job with a security firm that has third shift and overtime opportunities; it not only produces lift, but left me available during daylight hours to actually learn to fly.

Step two was to find an instructor. My first attempt was with a very good Certified Flight Instructor (CFI) at a local airport ten minutes down the road. Unfortunately he was a Private Pilot instructor who’s only plane was a Cessna 172 — not a Light Sport Aircraft, as it is too heavy. Ever the cagey sort, I did the research and discovered that there is a loophole that says one can train and even check ride in such an aircraft for a Sport license, but as soon as one is signed off is instantly unqualified to fly it! It was clever, but ultimately a stupid idea. So I found a CFI with a FlightDesign CTLS (which is a LSA) and a tailored curriculum to keep me straight, even though the airport is an hour away; he’s also a “better fit” to what I need as a student by personality (this is entirely subjective). Once trained, he has access to a tail dragger to further my skills.

Step three is to actually learn to fly an aircraft. By my reckoning, tens of thousands of hours in combat flight simulations would count for squat. I was wrong. Loads of stuff transferred over in surprising ways, while the things I knew would be missing were definitely missing. And, as I feared, I had picked up some bad habits.

Getting Some Return on Your Flight Sim Investment

Getting Some Return on Your Flight Sim Investment Page 2