Designed by Ramzzess for X-Plane 9.x

The Supersonic Business Jet (SSBJ) has long been a fantasy of aerospace engineers and business executives alike. For many decades designs have been floated, but for one reason or another, the projects have withered and died on the vine. Currently there are half a dozen or so aircraft manufacturers with an eye on fielding the first SSBJ including the Tupolev Design Bureau. With a long history of supersonic capable military bombers, Tupolev has a vast depth of knowledge to draw from.  Whether the market will ever accept the utility and cost of a SSBJ, however, remains to be seen. For fans of the concept, Ramzzess recently released his concept of what the Tu-444 SSBJ might eventually look like. While the external model is based on actual design plans released by Tupolev, the interior, avionics, and panels are strictly from the mind of Ramzzess. 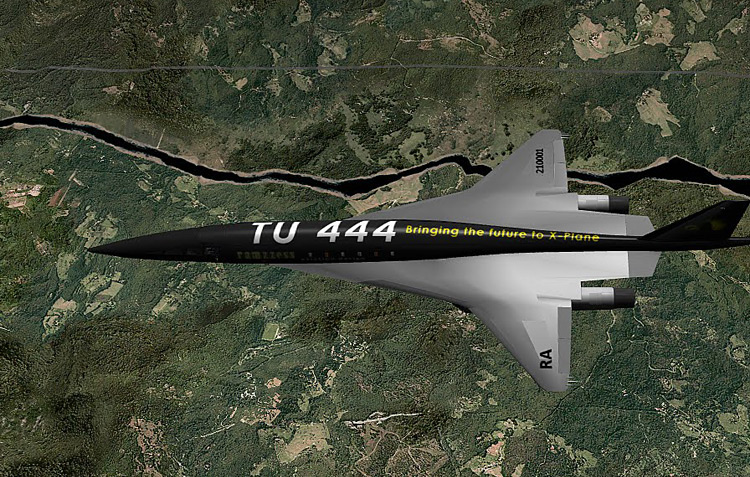 It would be difficult to find as exotic looking an aircraft as the Tu-444. With massive cigar shaped engines, a sleek delta wing, drooping nose, and a slim body, the Tu-444 advertises that she is built for speed. Borrowing from the Tu-144 “Concordski” and the military side of the house, the Tu-444 features the retractable visor similar to that found on the Concorde to aid in low speed, high angle of attack visibility. With a total max gross takeoff weight of about 90,000 lbs, the Tu-444 isn’t a small aircraft by any measure. All of that mass and complexity is designed to carry less than 10 passengers at better than Mach 2 a bit over 4,000nm. No doubt traveling on a Tu-444 would be an order of magnitude more glitzy than arriving in something as sedentary as a Gulfstream. 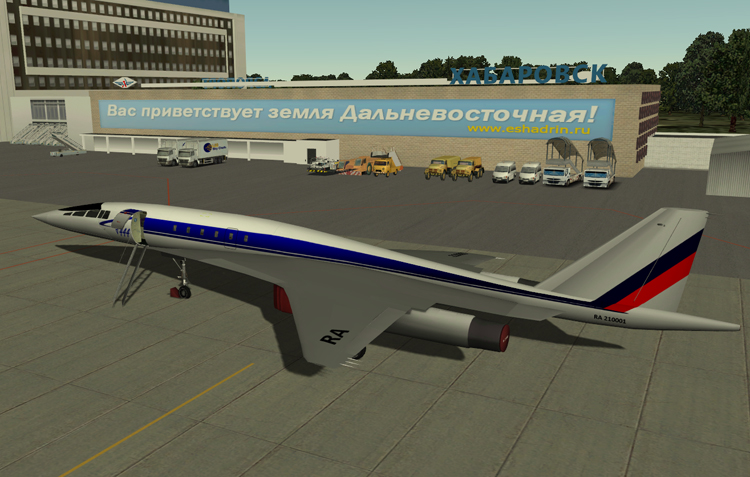 The cockpit, as envisioned by Ramzzess, is a cool interpretation of what the real Tu-444 panel might actually look like. Ultra modern, crammed with information and displays, the panel is pleasant to look at and highlights all of the special capabilities of the Tu-444. The virtual cockpit is smooth and nicely rendered. The overhead panels work great and the layout makes good sense. There are some significant labeling misspellings throughout the aircraft which clue us in that Ramzzess isn’t a native English speaker, but the mistakes are actually quite charming and lend an air of Russian “experimentality” to the Tu-444. 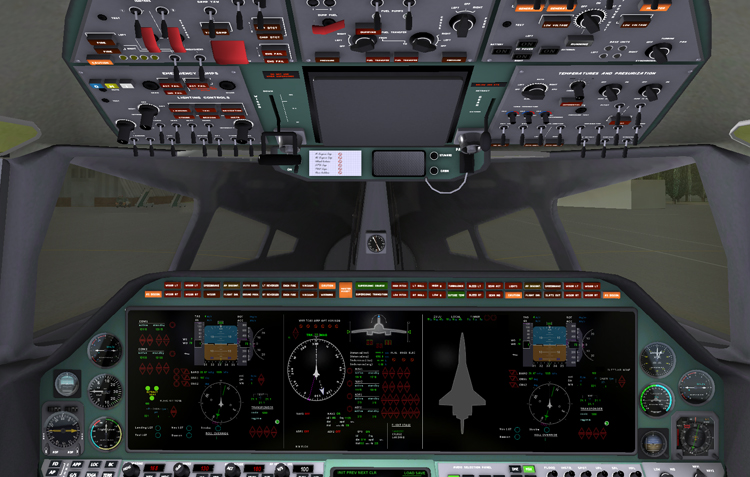 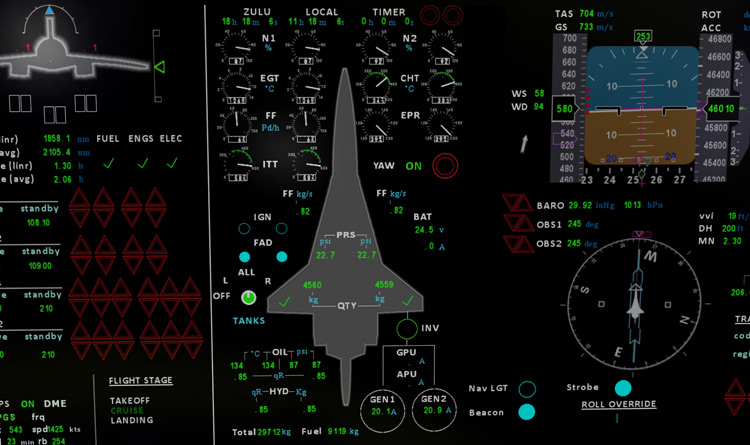 The manual is a 34-page PDF file that is well intentioned, but suffers from some typos and grammar problems. That said, the information within the manual is helpful in learning the systems and features that are included with the Tu-444. Without the manual you would be challenged to attempt to bring the cold and dark cockpit to life and getting everything up and running is a fun accomplishment. 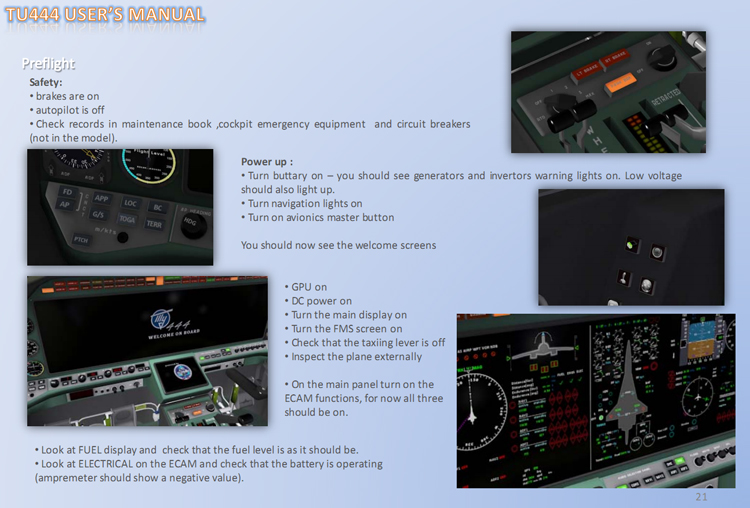 Once airborne, the Tu-444 will (as expected) blow you away with its performance. Climb rates are in the astronomical range, and care must be taken to keep the aircraft under Mach 1 over populated areas. The noise footprint of supersonic aircraft remains one of the bigger challenges that designers face and I don’t know how effective Tupolev has been at mitigating the noise factor of the Tu-444. Hand flying the Tu-444 can be done effectively below Mach 1, but above that I would recommend slaving the controls to the autopilot since small control movements can lead to large flight path deviations if you are clumsy on the controls. I flew the Tu-444 in the 40,000’ range and saw speeds approaching Mach 2.24. It was pretty cool to take off from JFK and be over Cincinnati in 35 minutes! 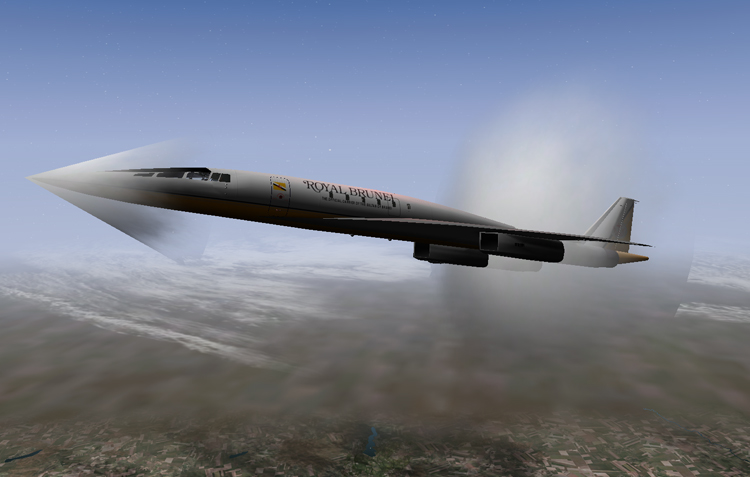