An A-10 without the GAU-8/A gatling gun is like a rattlesnake without fangs, but DCS: A-10C Warthog certainly has not forgotten this bad boy. The rich and unique zipper-like sound of the cannon has been captured as well as the devastating effect on its prey. DCS: A-10C Warthog lets players fly with the typical grab-bag Combat Mix ammo (1 high explosive incendiary (HEI) round for every 4 depleted uranium armor piercing (AP) round) or select all HEI, or a loadout of training rounds.

The Mk80 series of general purpose bombs are ubiquitous in the attack aircraft universe and are represented in DCS: A-10C Warthog by the 500-lb Mk82 and the crowd-pleasing 2000-lb Mk84.

The Mk82AIR is the modern equivalent of the Snake Eye high-drag bomb that many combat simulation folks may be familiar with. After release from the pylon, a half balloon, half parachute (ballute) device extends from the rear of the weapon, slowing it down significantly so that it impacts the ground well behind the launching aircraft. This enables pilots conducting high speed low-altitude attack runs to easily escape the fragmentation pattern of their own weapons without having to climb or perform other evasive maneuvers that may otherwise be deadly in close contact with the enemy.

Variants of the 2.75-in. Hydra folding fin aerial rockets (FFAR) are available to sling under the wings, including anti-personnel, anti-armor, smoke, flare, and training varieties.

The CBU-87 (with BLU-97/B bomblets for soft targets) and the CBU-97 (with BLU-108 “skeet” anti-tank submunitions) are available for loadout. Height of fuzing and deploy spin RPM settings are tunable in flight via the DSMS, a forgivable departure from real-life where these settings can only be set on the weapons themselves by the ground crew prior to takeoff. The experience of watching a CBU-97 pop over an enemy vehicle column that then disappears in a cloud of smoke is amazing.

The A-10 and Mavericks go together like peanut-butter and chocolate: it’s hard to have one without thinking of the other. The Maverick is brilliantly modeled in DCS: A-10C Warthog, from the CICU interface, to the sensor model, to the flight dynamics. Even the external textures are faithfully reproduced, down to the interface cable that curls around the rocket nozzle. DCS: A-10C Warthog includes the D, G, H, and K variants. No laser models as of 1.1.0.6.

The mainstay of the precision guided weapon community, both the GBU-12 (500 lb) and the GBU-10 (2000 lb) laser-guided weapons are available for carriage. Both can be guided onto targets using the onboard Litening targeting pod or even guided to a laser designation from a FAC or TGP on your A-10C wingman’s wing!

The JDAM is a nose and tail kit that snaps onto dumb GP (Mk82 and Mk84) bombs to make them precision guided munitions.DCS: A-10C Warthog will see a lot of GBU-31s and -38s slung underneath the A-10C’s wings. This weapon can only be delivered CCRP, so be sure to have your sensor point of interest (SPI) updated before going downtown.

If you take a CBU-87 or CBU-97 and staple an INS to one end and a set of control fins to the other, you get a wind-corrected munitions dispenser capable of accurate delivery of submunitions from high altitude — a nice place to be when the target is an AAA site!

The obsession attention to detail isn’t confined to inside the cockpit either. Every antenna, rivet line, hinge, vent, access panel, bolt, and fuel drain port of the Warthog is modeled in great detail, from the embedded GPS receiver behind the SADL antenna on the top of the aircraft, to the angle of attack sensor underneath the left side of the cockpit, down to tread on the main wheels sticking out of the sponsons. The GAU-8/A even has safety wire through the nut on front (what is that nut even for?). The rear of the Maverick shows the interface cable curled around the exhaust nozzle. Drop a Mk82AIR with the tail fuze armed and you can watch the ballute deploy as it separates from the aircraft. What other sim gives you this level of detail and accuracy? And for the stick-and-rudder pilots out there, there is a “start it all for me” button combination that executes the ramp start-up process for you in just a few minutes, just don’t ask me what it is — I wouldn’t know! 😉 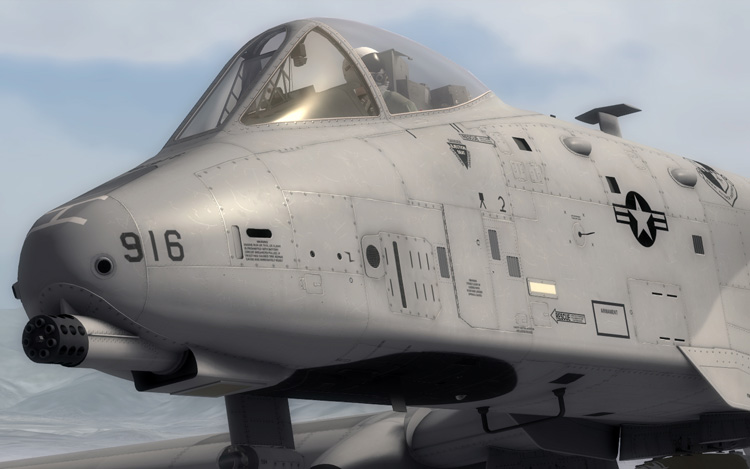 I noticed a bit of goofiness with TrackIR™ as I moved about the cockpit and suspect that the game tries to augment your view position to help you see whatever it thinks you’re trying to see. When I lean forwards the view pops up like I’m sitting up in the seat, making looking over the nose much easier than the original position. But when I sit back down, the view is still too far up: great for keeping track of whatever I was looking at over the nose but in a bad position to read the instrument panel, which was what I was trying to do. A quick jiggle of the head and all is well. This unexpected behavior persisted throughout my DCS: A-10C Warthog experience, but the “hot” zones are pretty intuitive and I learned to manage my view control pretty well. I find I have to reset TrackIR every 10 minutes or so, which isn’t terrible, considering I have my reset button mapped to my HOTAS, but it is a bit odd.

The AI of the previous DCS installment got more than its fair share of heckling, but Eagle Dynamics appears to have brought some additional intelligence to the AI with DCS A-10C Warthog. While still frustratingly stupid on comms, individual units are definitely a bit smarter now. There’s no battlefield-level cohesion like we saw in Falcon 4.0: Allied Force, but ground units attempt to disperse when fired upon, regrouping once they feel the attack is over (cue Jaws theme), and attack aircraft press the attack as long as they have ammo. With the updated Mission Editor, AI planes can even patrol zones, actively looking for targets.

The shining gem of the AI for DCS: A-10C Warthog, hands-down, is the virtual JTAC. It has to be experienced to believed. The JTAC operates per the JP book Joint Tactics, Techniques, and Procedures for Close Air Support (Joint Pub 3-09.3), following Type 1, 2, or 3 protocols per the handbook as the situation warrants. The JTAC will even zap you attack information over the datalink so you can see the target position in your TAD and read the same 9-line briefing as a digital message on your MFCD. Targets will be marked by smoke or IR pointer, depending on the battlefield conditions and equipment capability of the JTAC unit. The JTAC will also conduct battle damage assessment (BDA), redirecting you onto the target if you fail to destroy it on your first pass.