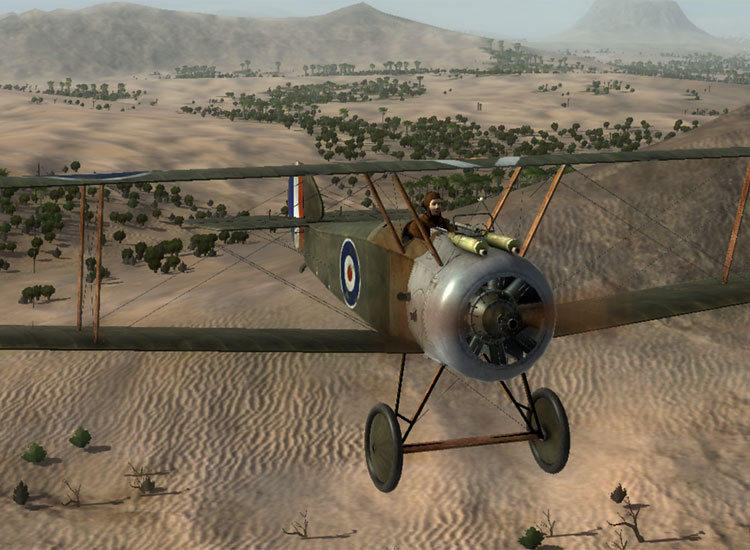 Air Conflicts: Secret Wars is an arcade game, and it’s not that good.

There you go, how’s that for review efficiency? As this is SimHQ and this game has aircraft in it then we can go either way with this now; we can either marvel in how much this isn’t a decent flight sim by brutally taking it apart bit-by-bit or we can relax a little, loosen the flight-suit and try to make the best of what is essentially trying to be a fun story-driven “air game”. Let’s have some fun. This is a SimHQ “Got Game” review after all.

Going into this review I had high hopes of something a little different, and perhaps a hark back to some classic such as LucasArt’s Secret Weapons of the Luftwaffe or perhaps even something similar to Microsoft’s Crimson Skies (my personal high-water mark for fluff story-centric flight games). In the last few years flight sims especially seem to have some particularly dour personality-less attitudes, where the desire for accuracy is squeezing out every ounce of fun a game can be. It’s as if stories and atmosphere in today’s sims can be seen as something that would devalue them for today’s oh-so-serious players and a bit of creativity in the missions and story are ingredients thrown out early in the process. While no-one wants the cast of Oklahoma! singing in the background as you fly, it doesn’t mean that some creative thinking can’t be applied. AC:SW is a game that makes no pretence about history, accuracy, or sometimes even physics, but does try for storyline and lots of personality.

The game is developed by Slovakian based Games Farm and published by the German publisher “bitComposer”. AC:SW is the follow-up to the PC titles Air Conflict (March 2007) and Attack on Pearl Harbor (August 2007). The bulk of Games Farm recent titles seem to have been for the Wii console, but AC:SW did get some interesting press for how it is the “Worlds first Sony Playstation 3 Move compatible flight sim”. The abridged summary of that is you wave a pink ball around pretending it’s a real joystick rather than use an actual joystick that works better and would cost you less, but let’s forget all that as this is just the PC version review.

You play as a young French girl named DeeDee Derbec, employed as a smuggler / mercenary through multiple air campaigns battling the Third Reich. Now there’s a flight sim intro I never thought I would write. The kindest thing I can think of regarding the story is that it shows some ambition. You fly in various locations, in multiple period-ish aircraft, all the while progressing thorough quite a detailed WWII “Boy’s Own” adventure.

The game uses odd cut-scenes that rely on a cartoon picture being slowly panned around as various voice-actors murder a “it’s so bad it might be good” script. It reminded me of the way CFS2 Pacific Theater used a comic storyboard to move a plot along for each mission. The storyline twists and turns and, if you’re drunk, or five years old, then you might really enjoy it. Personally after listening through much of it for the about two hundred missions I’d bet a drunk five year-old would still find it a little tiresome. 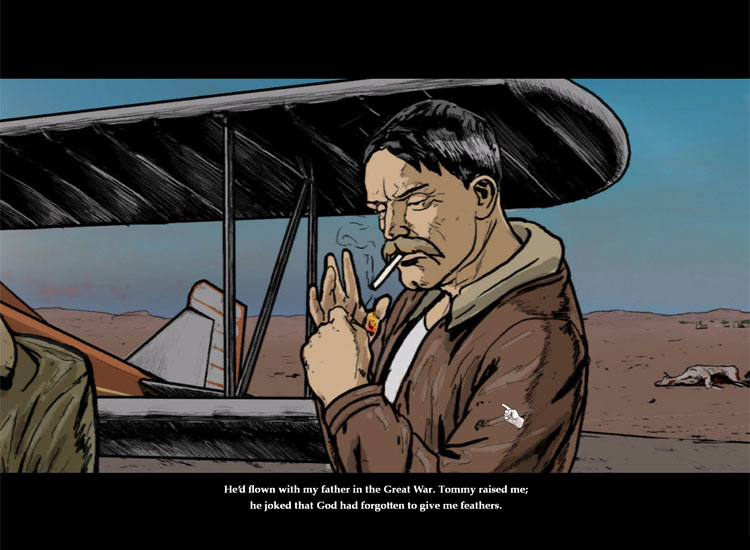 The characters and the period settings make no real sense, but the there are a few weird quirks of fate that liven it all up. You don’t so much as have to suspend disbelief if you know anything about the era, or aircraft, or even grammar, but more or less just go take disbelief out back and shoot it in the head.

The campaigns play through seven locations such as Tripoli (sand), Yugoslavia (green), and Berlin (grey) with 16 planes to unlock as you go. As part of the story-mode you get to play in various different “flashbacks” which allows you to play in various WWI scenarios although the missions are pretty much the same as you’d play normally. The “flashback” missions are an interesting touch and I looked forward to them more than the main storyline towards the end. 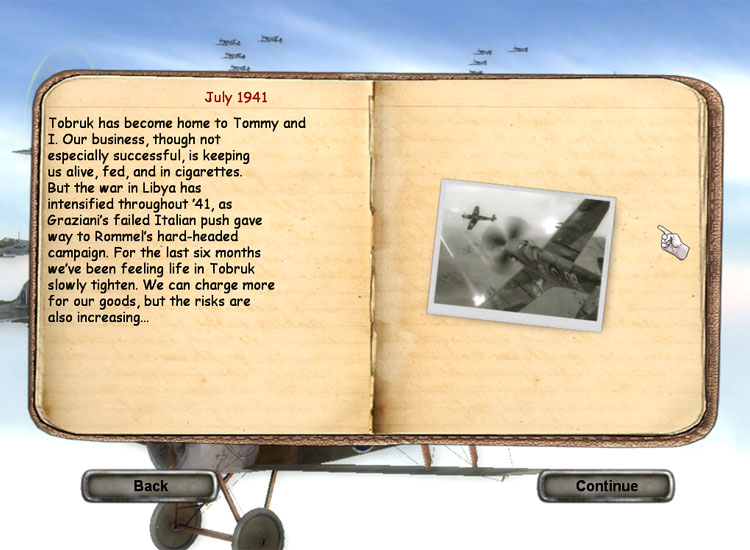 Overall you can see what they were trying to do with the story, and it’s probably not as bad as I am describing it looking back after 175 missions, but I certainly see it as a missed opportunity for a game like this.

The missions break down into four basic types:

There are lots of words describing the missions (that annoying block your radar view while they speak, and yes I said “radar” in your Sopwith Camel) but basically that’s what you do again and again. After a while it seems not dissimilar to Space Invaders, where you just keep shooting waves of featureless enemies, but in this one you just keep turning left. For all the effort put in the story it’s a shame the missions aren’t more varied. 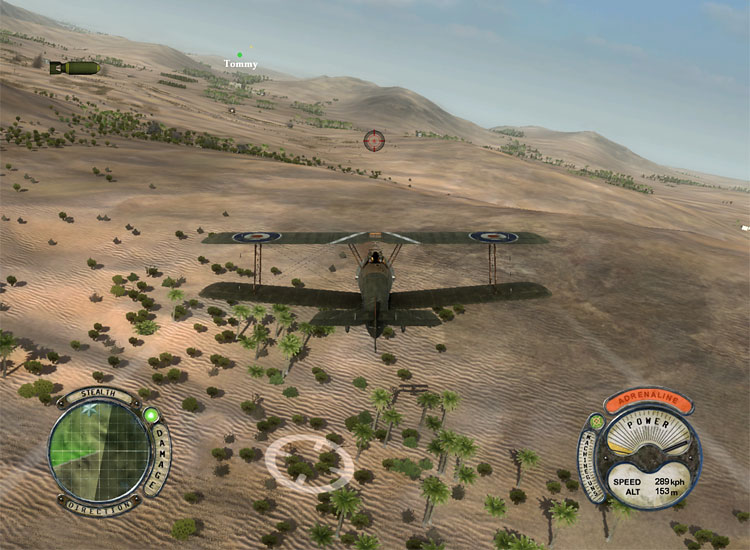 Yes, the bomb site works just like in Zaxxon.

The game is best played on a gamepad or even a mouse rather than a Joystick and I was 10 missions in and 4E24 Nazi kills down before I noticed the throttle did something. You do get a “Stall” warning, but even on “Simulator Mode” this game is not so much exaggerating physics as grabbing it by the groin and laughing in its face. The sensation of speed is more or less the same whether you’re in a Me-262 or a Albatross WWI plane.

As a variation in gameplay you do get to occasionally work the rear gunner turret of various multi-seat aircraft but it’s rather flawed in that the pilot just assumes your last instructions and will gladly crash into the ground unless you level the plane before you switch seat. It’s a nice idea but it would have been so much better if some sort of autopilot took over.

In an RPG-like style you get offered “stars” once you kill a certain number of things and you can upgrade various attributes like “Luck” (critical hits more often), “Leadership” (wingmen do something) and so on. It’s an interesting idea but like so many other areas fails to have much real impact. I certainly didn’t feel I had maxed out my Luck skills after mission 175. 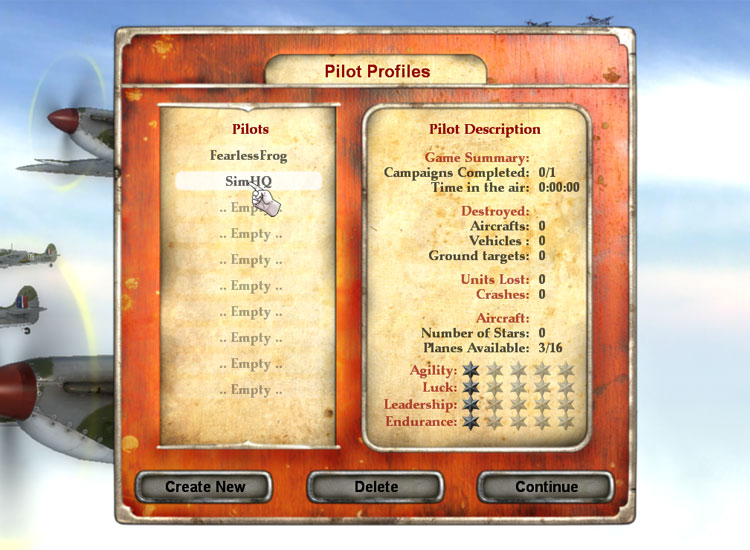 No stars means no luck. 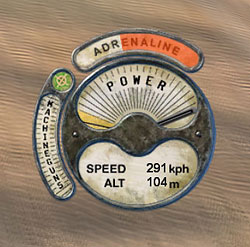 One curious additional game mechanic is the “Adrenaline” feature, in that when pressed with slow down the game in “bullet-time” style to allow you to line up your shot. It doesn’t really work that well, or rather I forgot about it after a while, and there is no small irony of having to bash a button called “Adrenaline” to get some fun out of this repetitive gameplay.

Despite all these various games mode and features, which do show some effort and innovation, the play seems to fall into the old trick of “if you can’t write decent AI then just add more targets” —it does get old quite fast and despite playing on all difficulty levels I didn’t feel the game offered enough variation or challenge to continue.