How does the sim work in combat? God knows how anyone has ever shot down anything with these systems! They’re 100% analog, and slow and picky to operate. Most all the buttons on the Volhov’s three control panels work, and you get representations of both the P-18 “Spoon Rest” tracking radar and the infamous “Fan-Song C” guidance radar, with a height finding channel on one display and azimuth in the other. The system will support three missiles in flight, all directed at a single target. The radar can radiate in multiple modes, with the Lobe-On-Receive-Only (LORO) mode being the one that makes the RWR in your F-16 scream “Missile launch!” at you. The radars are more jam-resistant than you’d think, and the system also has a sneaky, though hard to employ launch-on-jam mode that requires you to know an approximate target altitude and program it into the system before firing. Jamming burn-through is also implemented, as targets close on you. You have to do everything, too, from turning on the system’s generator, to spinning up the missiles and waiting before launch, to switching your radar active, locking the target, designating the firing order, going to LORO, and launching one, two, three, manually. You’re doing the job of about four people in the control cab with this, and it gets “fiddly” awfully fast. Plus, there is no “track while scan” mode in these radars. You’ve got something like an RWS mode where you pass from the P-18 to the Fan Song, and you can see the blips in the Fan Song’s cone, but you can only take one on at a time. And it is only the Vega that has a Doppler capability. Interestingly, however, the S-75 can be employed against ground targets, and the sim represents that capability. I don’t know of that ever being actually used in combat, however.

The S-125, on the other hand, is surprisingly automatic. Once you find the target, with the P-18, you pass it to the P-15 “Flat Face” tracking radar. Once you lock him, you can see on the Flat Face’s display if he’s in max range or not. You spin up your missiles, up to four of them. And when you fire, the system will automatically salvo two if you have salvo selected. Here’s one idiosyncrasy. If you keep the missiles spun up too long you have to recycle them. There’s a pucker-factor moment, when you know the bombs are about to fall on you and you’ve let the missiles overheat. 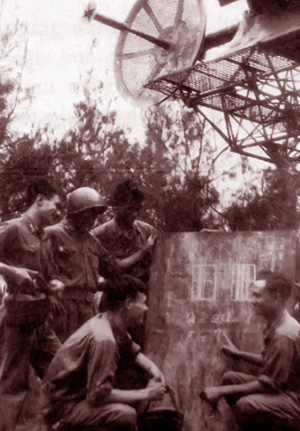 There are some muted sound effects. I have only worked on the test range, which is one of the provided scenarios, so I don’t know if you get the sound of bombs falling around you or not. The Asuluk range is my favorite scenario, dueling against decoys simulating all sorts of aircraft. When these systems were in use, the operators went to Asuluk frequently for training by Russian operators, and the standards were exacting. Additionally, the air defense of Hungary during a NATO strike in the 1980s is an alternative. But as you can see, “Hpasp” has also gone to the trouble of defining scenarios in various parts of the world, reflecting real combat use of these missiles.

If you want to try to take down Gary Powers, here’s your chance. Want to replicate Zoltan Dani’s Belgrade Surprise? Try for the Stealth fighter. Or be the Egyptians in 1972 and try to keep the IAF from plastering your air force. Soon, with the next upgrade, it’ll be time to sit in the seat of the North Vietnamese at Hanoi during 1972’s Linebacker II, and try your hand against the advanced ECM of B-52 bombers and U.S. attack aircraft. The scenario has been accessible with the Volhov for some time, but now you’ll be able to do it with the less advanced Dvina that was actually used in combat in Vietnam. It’s not easy to take on the West, my friends, with these Neanderthal-level systems.

The idea of the sim is to provide a photo realistic view from the operator’s chair of what he’d see and hear in a real-world engagement, and it does pretty well with its limitations. You can’t stick your head out of the UMK cab and see the hit, sadly, but then again, the operators probably didn’t have time for that either. You do hear the WHOOSH of launches, though and you watch them fly in on the scope, impact the target, and then you see the debris field that shows a kill. Take that, air pirates!

With all that, it is, of course, still a work in progress. I’ve had several instances where targets spawn far away from my engagement range, and don’t fly in where I can hit them. That’s a little TOO realistic. Also, there is a mode that replicates a manual plotting table, and it uses realistic graphics to portray speed and distance; that’s confusing to me, mostly because I’m not used to the Warsaw Pact-style presentation, and I’d like to see a more user-friendly presentation of that. Although these systems mostly aren’t user friendly in their true form, I’d like to see more automation, simulating a full crew for the system, so that you aren’t under so much button-pushing pressure, also, and be able to do things with drop-down commands. You don’t get that — you’re one person rushing from panel to panel to get the missiles ready to fly, and that’s probably the only non-realistic part of the sim. You don’t hear the radio reports from the other batteries, or from anyone else, it’s just you, the radar screen, and the panels. That’s to be expected, given the one-man dev team and the overall 2-dimensional approach.

You need the ability to display in 1280×1024 or better resolution for the sim. Most of us can do that by now. that’s the only requirement, really. My system is three years old and it was not top of the line even then, but it flies Rise of Flight on moderate settings fine, and it has no trouble whatsoever with SAMSIM, even considering the huge number of calculations going on under the hood. I give SAMSIM two thumbs up, and if you want to see what life on the other side of the SAM is like, this is where you should go.

In the very near future, “Hpasp” will release SAMSIM v923. The planned release date is the anniversary of the biggest bombing after World War II (history buffs will know when that is!) In addition, it will introduce the SA-75M Dvina (SA-2F) system.