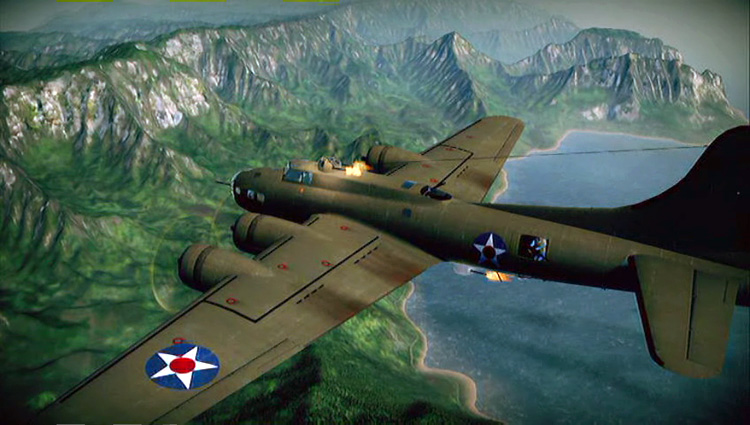 Yep, it’s release snuck in on us! I called 5 stores trying to find a copy, 4 stores hadn’t heard about it, but one of 3 local Gamestop’s had a single copy available. I quickly went to pick it up and the price was a surprising $40 USD! You can’t beat that for a new release, when usually it is $60 to $70 USD for new console titles.

So even now as I start writing this review our SimHQ Console Forum is lighting-up about this game, and some of our members are still trying to find a copy.

Birds of Steel is a Pacific based WWII flight game developed by Gaijin Entertainment, the same folks that did the excellent IL-2 Strumovik: Birds of Prey and Apache: Air Assault console games. Birds of Steel is published by Konami.

Here is a link to the launch trailer released on YouTube in late February 2012. 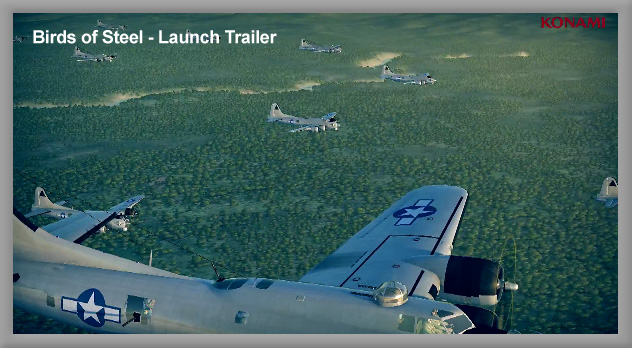 Of course the game was developed primarily for a console game pad, and the game pad controller works well. But the game alsosupports some joysticks like the Saitek AV8R-02 and the Cyborg FLY 9. The basic joysticks seem to work well but I’m hearing about program compatibility issues with some joysticks and HOTAS like the X-52 Pro on the PS3. Presumably this will get better over time as the demand for realistic flight controls on console games increases.

Also, the game offers different controller layouts and lets you program most of the controls to fine tune as you see fit.

Another thing. I don’t fault Gaijin for this, but it sure would have been nice to have head-turning support via Kinect on the Xbox 360 console. Just sayin’.

New in Birds of Steel is ranking, points, and stars, used to allow you to “buy” more planes. Not exactly what I prefer, but that seems to be the trend in gaming. It works throughout the game in all modes. I can see some benefit, but it can also create problems, like in multiplayer when all I have is a vintage biplane up against Spitfires.

But there is a problem. The plane “unlocks” need to be a lot less difficult and arrive faster. For example, I’ve played 2 of the 3 campaigns, almost all of the single player missions, the provided co-op missions, and still have only received enough points to buy 4 new planes. 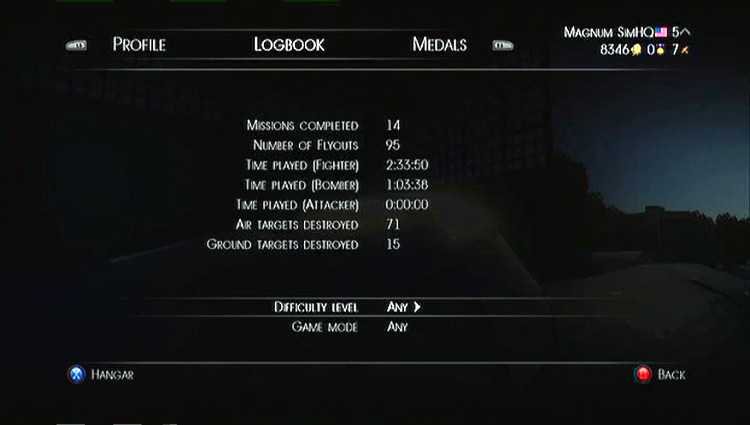 There are 3 campaigns included with the game. The first is the pre-war campaign which is a series of tutorial missions. It is a very well done tutorial and much needed before moving on to other battles. Then there are the two main campaigns based on the Pacific air war. One campaign is from the USA point-of-view, the other is from the Japanese point-of-view. Each campaign contains a series of missions that must be played and unlocked in order. Each campaign comes with a great history lesson too, with good narration on the background of the war and the actual battle, and includes actual WWII footage. You then move into your mission briefing and you are on your way. 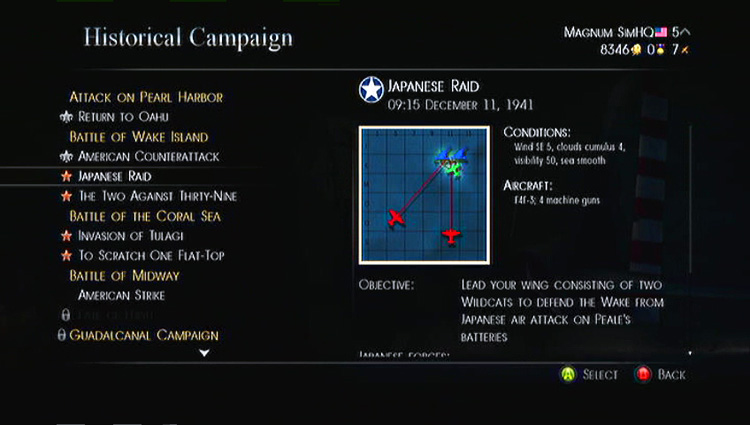 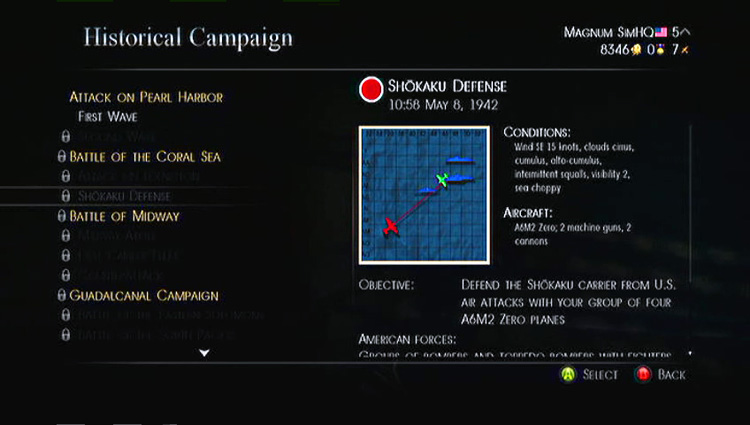 Most missions do have you taking off and able to land if you choose. But they also give you shortcuts to reduce the travel time. Remember this is a console game. Most console gamers won’t enjoy the long flights into battle like most fellow SimHQ gamers, but if you want them, they’re included. The shortcuts work, and work well, keeping you on task and minimizing the transit time. 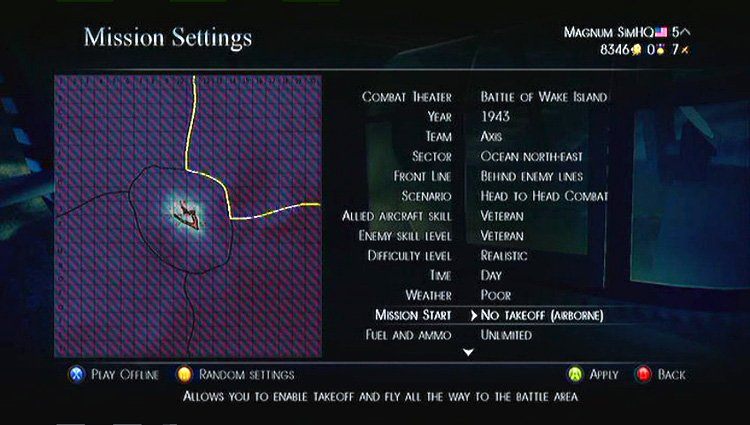 In addition to the campaigns, you also have a set of pre-made theaters and missions. What is great about this is that it’s not just the Pacific battle here, you also have the Western and Eastern front of Europe, based on planes from England, Germany, and Russia, along with the Mediterranean theater. So even though this game is based on the WWII Pacific air war, it’s nice to have these extra theaters and planes in. Great job Gaijin! 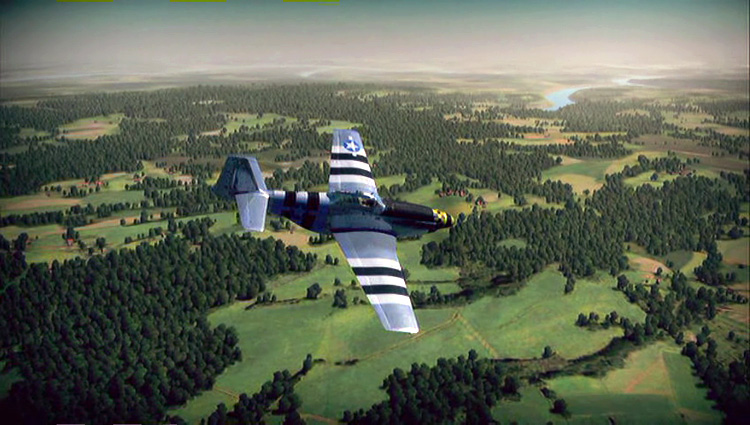