At the beginning of your Lunar Flight career you’ll create a character with a Rank of 1 and a small budget to get started on some missions. As you complete missions you’ll earn the listed money and XP points. When you’ve got enough saved, you can buy upgrades and special items for your lander. These include items that progressively increase the fuel efficiency of your main thruster (letting you stay aloft longer per tank of fuel), progressively increase the strength of your RCS thrusters (so you can maneuver faster, and more quickly), and stabilizers which progressively work to eliminate axial movements (imagine them as a sort of return-to-center).

Also available are a handful of booster items your lander can carry. These include an emergency fuel reserve tank, a gyroscopic stabilizer for canceling out unwanted axial rotations, and a 300% boost to your main thruster for 5 seconds. Note that these items are single use, and must be repurchased after landing if you want to use them again. 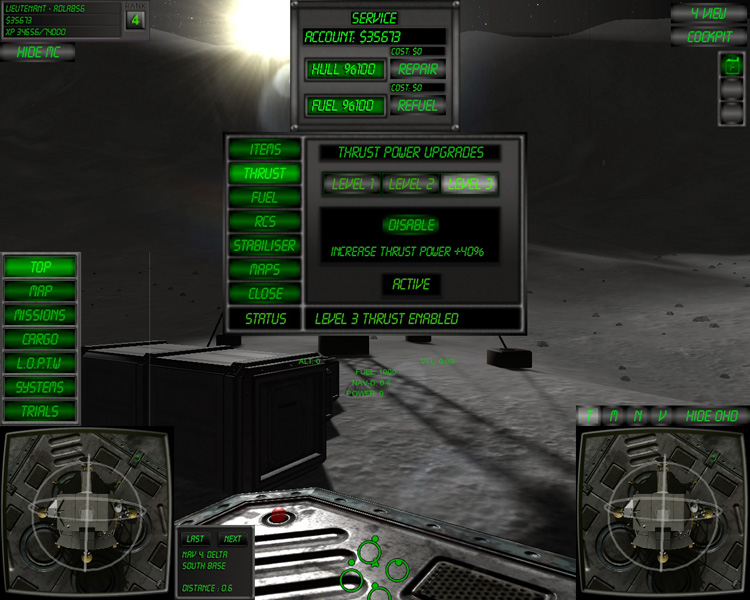 The mission selection screen offers an array of 6 various missions at any one time, which you can scroll through and choose from. At present there are three mission types. Transport missions will load a defined cargo weight on your lander and assign a delivery point at another base on the map. Data Acquisition missions place a spherical boundary above the surface and requires you to hover in that sphere while sensors complete a data survey, then you land back at the assigned base to upload the data. Lost Cargo missions have you moving out over the lunar surface given a general direction such as “West of Alpha Base” where you must scour for a piece of cargo lost among the many rocks.

Completing these missions will pay more money and XP points based on the distance they are from your starting point, and the weight of the cargo. Some, such as transport missions, can feel routine after some time in the pilot seat. The toughest of all are the lost cargo missions, because you really don’t know where you are going and may have to spend an extended time in a search pattern. You’ve got to handle your fuel use carefully and cover the general search area systematically to avoid wasting fuel. If you can’t find the cargo before you need to head back for fuel, then you can return to a nearby base for fuel and then go back out and resume your search. But as compensation, long range lost cargo missions are the best paying, and in my opinion, the most exciting. There is a nice sense of satisfaction in making a quick judgment call on whether to go for the cargo instead of RTB for fuel, then taking it back to base with barely 1% fuel remaining in the tanks! 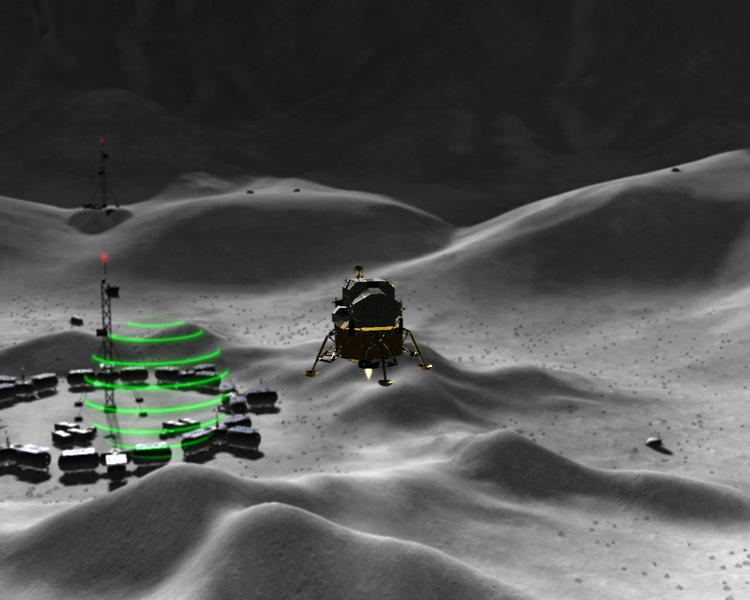 My press sample of Lunar Flight included three unlocked maps ranked easy, medium, and hard. The increased difficulty comes from several factors, including the distance between the lunar bases as well as the increased numbers of base structures near the landing pad. There is also the geography of the terrain that comes into play. The harder maps have bases that are placed behind large terrain features, greater distances apart, and at greater altitude differences.

The types of missions available on each of these maps was the same, but the difficulty of each increases due to the changes noted above. The lost cargo mission in particular has a satisfying increase in difficulty due to the larger terrain area which must be searched on the medium and hard maps. And of course, as a player slowly upgrades their ranking and cash (and thereby their space ship), completing missions on the medium and harder maps becomes a good deal easier.

Trials act as an almost separate gameplay mode. After choosing a trial from the list of those available (much the same as choosing missions), the screen blanks and the players space craft is placed at the designated starting point. After a countdown from three, you fly you way through a series of checkpoints on the way to the destination landing point against the clock. As you might expect, on the harder maps clearing these checkpoints will take some handy piloting skills. Happily, an “Abort” option exists to save players the struggle back to base when it’s clear that a trial run has gone bad. Just click “Abort” and you’ll be reset at base to reattempt the trial, or choose a mission. Your personal best times for each trial are stored, and the leaderboard can be viewed from within the game interface.

Lunar Flight launches with a simple configuration screen that allows selection of screen resolution and graphics quality via dropdown boxes. Pay special attention to the notice on this configuration screen regarding the HUD supported modes. While other resolutions may be available and usable from within the dropdown, they may not render the HUD properly or at all. The graphics quality dropdown allows a choice of one of six settings. These provide a useful scalability in performance, and in my testing even the lowest setting still provided an excellent graphical presentation. The highest detail settings on very large maps are pretty intensive, and would sometimes fail to load for me.

The lunar surface is textured nicely, as is the lander and the base structures. The sunlight traces shadows over the terrain and objects on it, as well as over the lander itself. Seeing your own shadow tracing over the rolling gray landscape while in flight often provides an interesting sense of scale. Seeing the Earth in partial shade, with it’s atmosphere and faint features peeking through, give and even more stark sense of scale and place. A blanket of stars serves as the backdrop, and while I was not able to pick out any of the constellations familiar from my amateur astronomy hobby, the presentation is well done. 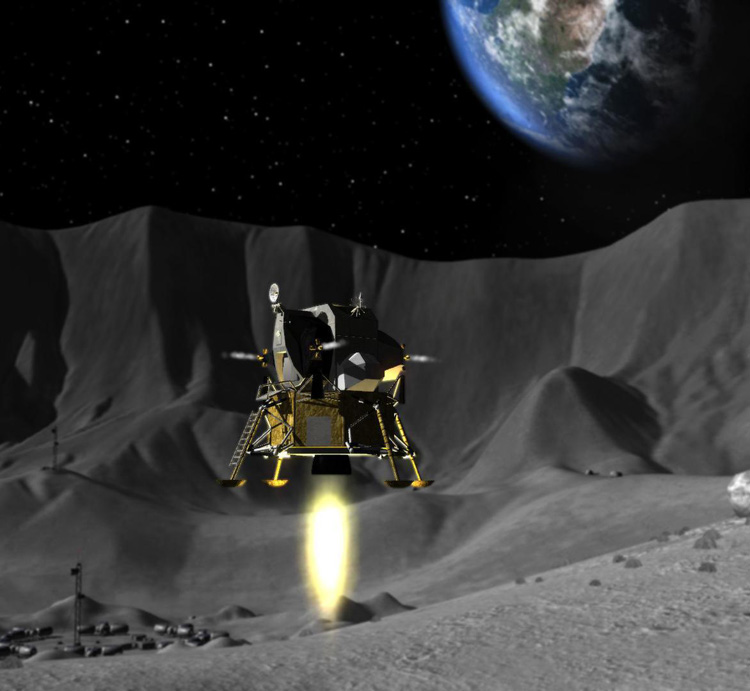 Additional views available while playing are well done. The fly-by camera shows off the lunar surface and the lander in nice detail, complete with a depth of field effect. The map screen usefully highlights not only the currently designated waypoint, but also your lander’s location. The indicators and readouts on these screens are generally legible and useful. In my own opinion, the HUD view seems the most like looking out a window of the lander to the outside world, complete with an electronic HUD projection. A couple of minor shortcomings of the HUD are it’s lack of variable contrast (to prevent it blending in with the often bright lunar surface behind it), and the relatively small size of the velocity indicator cross. I made considerable use of the velocity indicator cross as a reference during flight, and thought that too often the small size allowed it to become lost completely within the other graphical elements of the HUD. Using the cockpit view allows earning of extra points and cash for each completed mission. The cockpit view is well done and contains everything you’ll need to complete the missions, but for me the small windows coupled with the lack of any ability of take a better look out them seemed to lose a bit of the excitement and wonder of looking at the lunar surface.

The audio presentation in Lunar Flight is in my opinion, fantastic. The musical elements are atmospheric synthesizer compositions that ebb and flow throughout the gameplay, and always contribute to a generally peaceful mood. When the lunar lander is low on fuel or damaged, the music becomes more tense and the pace quickens. This beautiful musical backdrop is punctuated by voice recordings which I believe are from the 4th day of the Apollo 11 mission, just as the crew was entering lunar orbit. The recorded dialog is of course a mix of highly technical and more relaxed personal observations between the astronauts and mission control, and it does repeat after a while. But I think these voice recordings blend into the overall audio scene, and serve to add some life to the otherwise completely barren lunar landscape. A few times while en route with very light work load, I would listen more closely to the dialog, reminded of the many challenges the Apollo crews and their mission controllers faced.