Let me preface this article by referring to my SimHQ review of Microsoft Flight in which I think I presented a pretty fair assessment ofMicrosoft Flight from both a hardcore simmer and a casual gaming perspective.

The long and the short of the Microsoft Flight review was that it looked stunning, but lacked much in the way of “game” despite the target audience being geared more toward the “gamer” crowd in an attempt to hook them in to a light and fun simulator. I don’t bemoan those that love Flight. Really I don’t. I’m very happy that they are happy.

With that said, I started pondering the things that I would have done to make Flight a more interesting game. As I started down my list of scenarios or things I thought that might be interesting for a more casual gamer type player, I had a niggling sensation of déjà vu in the back of my mind. Where had I seen these scenarios before? And then I realized — I was describing in my own mind the very gameplay that already existed, and has existed for over five years in Microsoft’s previous offering: Microsoft Flight Simulator X. I remember playing those missions! Or did I? There was only one way to find out.

I started up FSX + Acceleration (now known as Microsoft Flight Simulator X Gold Edition) and started exploring those long forgotten menus. Then I started playing some of the missions and became immersed for hours and hours in the varied missions that ranged from simplistic and amusing to downright difficult and challenging. With 23 functional 2D cockpits, virtual cockpits, global scenery coverage, and 87 unique missions, I was stunned when I started to weigh the value of FSX against the value of Flight. Granted, back when FSX was released along with the Acceleration pack you would have had to invest near $100 to buy the Deluxe version and the Acceleration pack, but the combined price as FSX Gold has dropped to under $35 today. When you start to do the math on potential DLC for Flight if we are talking MS Points for each aircraft and geographic region — well, the sky really is the limit for an investment in Flight. 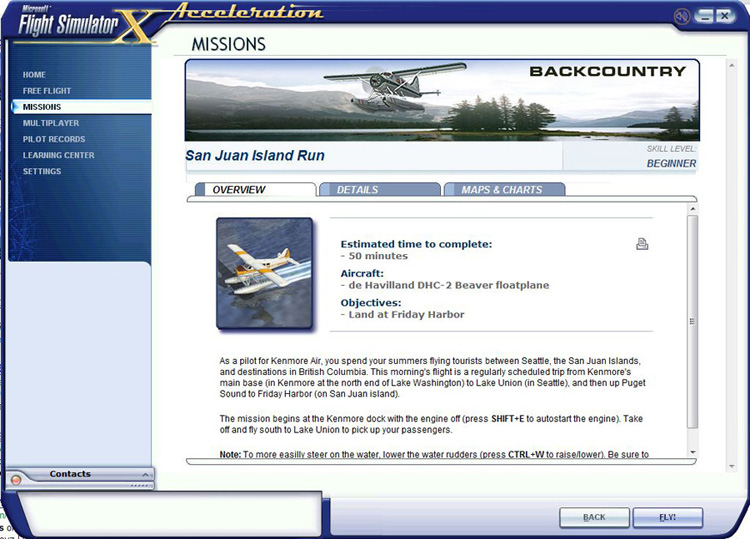 After spending many hours reacquainting myself with FSX and comparing the experience to Flight from a gamer perspective, it is clear to me that FSX blows Flight out of the water both from a content and value standpoint. The missions range from simple yet challenging tasks, such as dropping a bag of flour on a floating dock, to fairly complex and challenging engine out scenarios in poor visibility and raging storms.