When “adlabs6” reviewed Lunar Flight, I was quite impressed by the quality of the sim. I was expecting a cheap Lunar Lander knock-off with cheesy goals and arcade music, but the admittedly basic controls and simplified simulation physics are packed around a very addictive experience.

In case you’re not familiar with Shovsoft’s Lunar Flight, the game puts you into a simplified cockpit of the Apollo Lunar Excursion Module (LEM) on the Moon. This modern day rehash brings the classic challenge into a 3D world with stunning graphics, a moody soundtrack, and real astronaut sound bytes. In addition to adding depth in the geometrical sense, Shovsoft has added depth to the gameplay as well, including several challenging mission types (cargo transport, data survey, and searching for lost cargo pods) and time trial missions with a networked Leaderboard to show off your mad LEM piloting skills. 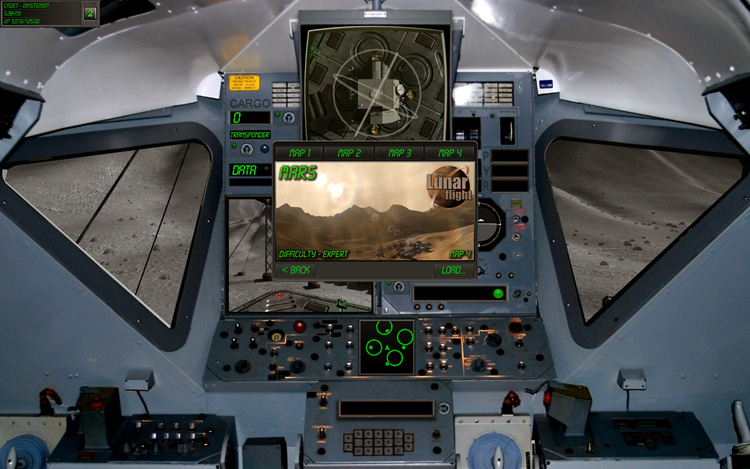 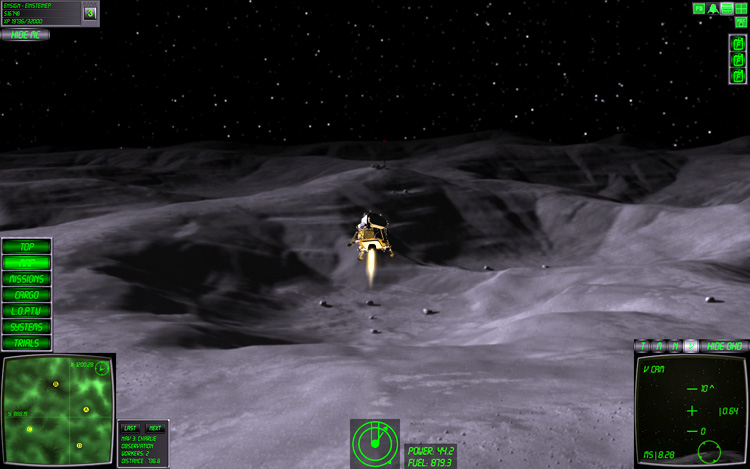 It’s like Planet Express, except with a LEM! And no Zoidberg. 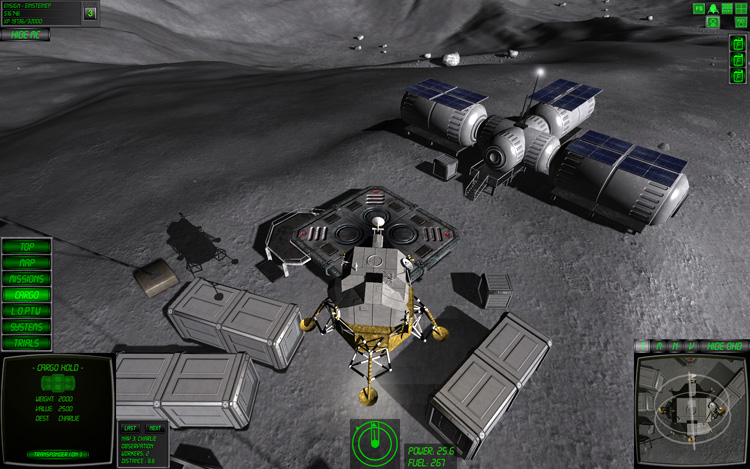 Descending in for yet another perfect landing. Aww yeah!

Recently, Shovsoft has taken Lunar Flight to new heights, specifically to the Martian plains, and now puts LEM pilots to the test with the higher gravity and atmosphere of Mars. If dealing with 2.3x the gravity and aerodynamic forces isn’t challenging enough for you, Shovsoft also simulates dust storms on the surface of Mars which greatly reduce visibility in addition to making aerodynamic flight even more challenging for the little bug.

Here is a video of the Lunar Flight LEM in action in the Martian atmosphere. Note that this video is sped up 4x normal speed, but still gives a good impression of what it’s like to fly around on the surface of a “Shovsoftian” Mars. 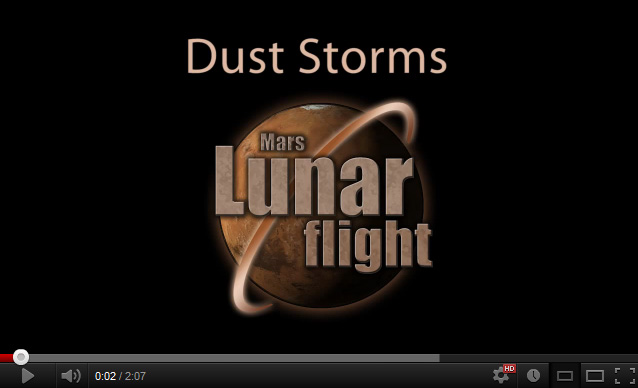 Not only does version 1.6 come with the Mars map, but, as an added bonus, all the maps are unlocked so you can jump straight to the Mars map as soon as you start the sim up. 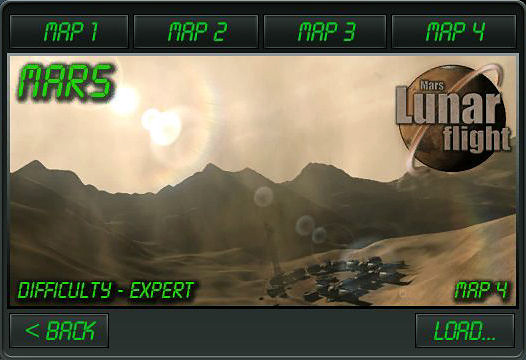 If you do jump straight to the Mars map, however, you’re in for an unpleasant surprise. While the map is unlocked and technically flyable, the Lunar Lander you start off with is so underpowered that even when flying without any cargo you have to keep your thrust at 85% just to match Mars’ gravitational force. The starting Lander is also so inefficient that you’ll burn through all your fuel at this rate in a handful of seconds, making anything more than hop up and down on the launch pad downright deadly. 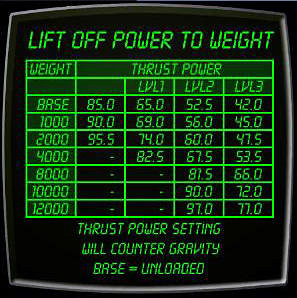 I would have gotten away with it, too, if it hadn’t been for those meddling gravitons!

Who Has the Controls?

Speaking of deadly, my first three flights ended up in explosions on the launch pad due to bizarre controller inputs. Even after reading adlabs’ control setup recommendations and reading through the Lunar Flight documentation, I just could not get my X52 Pro or CH Pro Pedals to work properly in this game. I ended up deleting all controller inputs and used the keyboard exclusively for all my flights. While I know the control experience could be much better, I found the game was quite playable and even enjoyable using just the keyboard inputs. 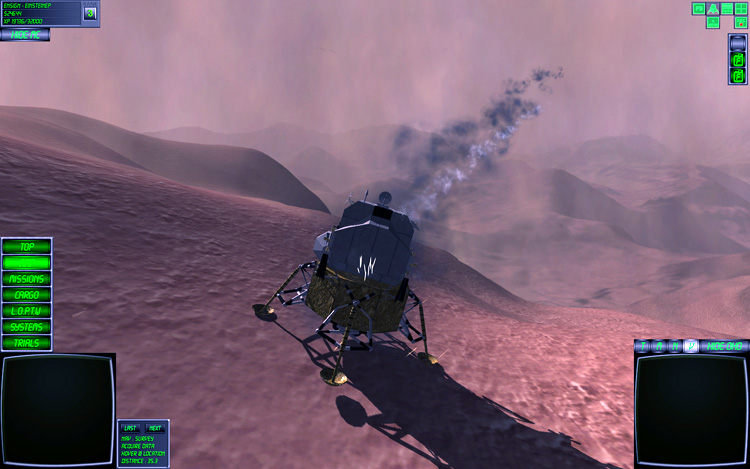 “Thank you for calling AAA Mars. A service vehicle will arrive at your location in approximately 9 months.
Thank you for waiting, we appreciate your patience.”

After a few frustratingly short and disastrous sorties on the Martian surface, I transferred back to the lunar surface to rack up some extra points (XPs). As adlabs points out in his review, the missions, while simple and repetitive, are quite addicting, and I had upgraded my LEM to a thrust level of 2 (out of 3) in a pretty short time, which meant I had a bit more thrust margin to play with in heavier gravity. On to Mars! 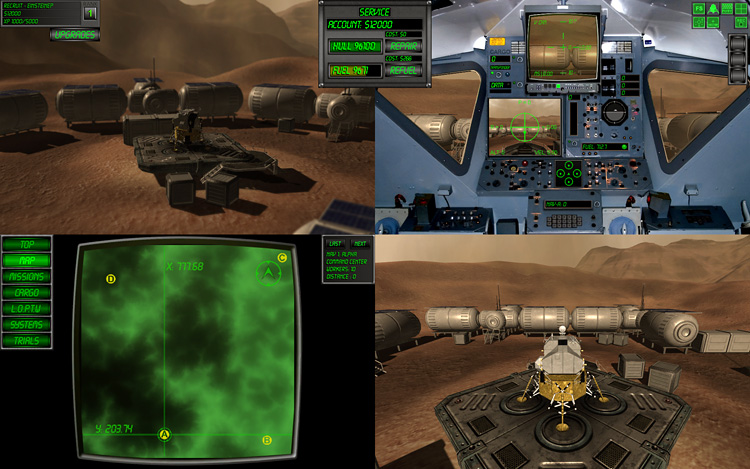 Sadly, the skill set I picked up on my remarkably short lunar career did not port well to Mars. The aerodynamic drag forces are quite significant in even the very thin atmosphere of Mars, requiring a constant application of forward thrust just to stay at the same speed. The higher gravity also meant I was burning a lot of fuel just maintaining altitude, resulting in a miles-per-gallon ratio that even Detroit would cringe at. I had to learn to use my lander as a missile instead of a low-g leap-frogger, a feat much easier said than done. The higher rate of gravity meant I had even less time to react to situations as they popped-up, resulting in frequent rendezvous with uncontrolled closure rates (i.e., crashes). 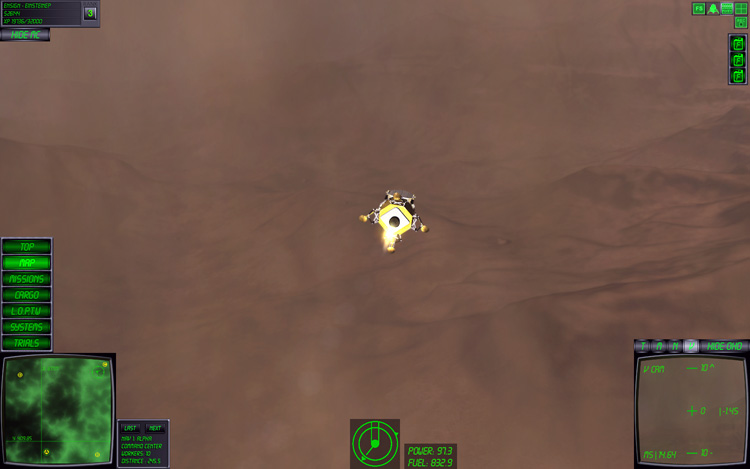 Using the descent stage as a cruise stage.