DCS World is the latest product from The Fighter Collection / Eagle Dynamics in the Digital Combat Simulator series that brings previous and future DCS titles together under one application. DCS World is to DCS modules as an operating system is to applications: it doesn’t do anything terribly exciting on its own, but serves as a hub for running and managing separate simulation modules. Common tools, like the Logbook or Mission Editor, are built into DCS World, so a player can operate all their DCS games, er, simulations, from one interface. This integration also ensures multiplayer compatibility with all those modules, even if the players don’t own the same modules. The auto-updater feature ensures that all those modules and the intermediate files required to support them are kept at the latest version with the least amount of effort from the player. Adding additional modules and updating existing ones is also a snap, as long as you are trying to install the right versions of the right modules.

DCS World is free and comes with a flyable Russian Su-25T Frogfoot aircraft, while other modules can be downloaded from the site. The activation key for each module can be purchased directly online from their E Shop. At this time, available modules include the A-10C Warthog, the Ka-50 Black Shark, the P-51D Mustang, Combined Arms (the ground war package, still in beta), and the recently pre-released Flaming Cliffs 3. All the DCS World products are digitally downloaded and any DCS products you find on Steam or other online retailers are the standalone products, not DCS World. Depending on the product, you might be able to use the activation code with the DCS World module from Digital Combat Simulation, but do your research before clicking that “Buy” button!

Click here if you’d like to go through the installation and activation sequence and it will open a new window. Otherwise, we’ll move onto the Menu Options in DCS World v1.2.2.

The menu options in DCS World won’t be new to DCS pilots.

The Instant Action menu item brings up a list of canned missions for each module (except Combined Arms for some reason) that you have installed. These missions vary from very simple introductory missions to rather challenging conditions that should test even the most seasoned combat pilots out there. Instant Action provides a great way to quickly get familiar with your new module (and control configuration!), or to just hop in the saddle for some quick action.

This feature was first introduced to the DCS series in DCS: A-10C Warthog and I couldn’t help but rave about it. Even today, this tool is probably my favorite in the set. Create Fast Mission lets pilots quickly create battleground environments with more control over the settings than with the Instant Action feature. Create Fast Mission also enables players to go deeper, using the Mission Generator (also available in the Mission Editor), to rapidly create a random sprawling battleground environment based on tunable parameters that can be tweaked to get just the desired effect. An infinite number of randomly generated battles are waiting to be fought.

Either way, the randomly generated battle will be grand.

Complex machines like the A-10C require a dedicated training effort with lots of hands on time spent in a coordinated, organized manner. A handful of training flights are included in DCS World that provide a somewhat interactive and hands-on experience for pilots-in-training. The training sessions are essentially heavily scripted missions that rely on triggers, visual cues, and text and voice messages to walk a student pilot through the subject material. The missions serve are great refresher courses for pilots that have been out of the cockpit for a while, or for pilots with a little experience who are looking to hone one more skill, but completely new pilots may find the strict structure of the training missions a little unforgiving: there’s no one to answer any clarifying questions and if you miss a geographical trigger or altitude limit, the mission “runs off the tracks” and the student pilot is left hanging in the air, suddenly flying solo with no clear indication of what they did wrong.

Given the current limitations of the DCS World mission editor, the training missions are incredibly complex pieces of work, but don’t really suffice as standalone training materials. Pore over the manual, soak in each section as well as you can, and try to practice as much as you can in the free flights before going to the training missions. A little preparation goes a long way in learning these complex beasts. 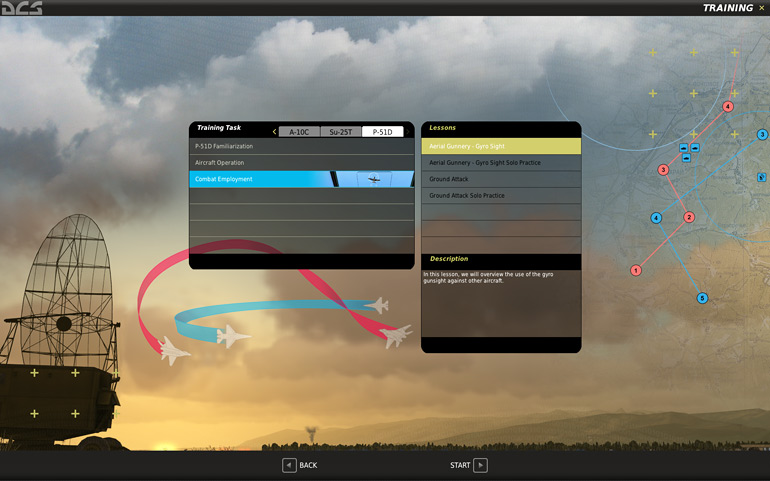 At the current time, only the A-10C and the P-51D have interactive training missions. Training videos for the Ka-50, Su-25T, and for Flaming Cliffs can be downloaded from the DCS web site here. The Flaming Cliffs videos were developed using the Flaming Cliffs 2 simulation, but the training concepts are still valid for FC3. There are no training missions forCombined Arms at this time. Of course, asking questions on the SimHQ DCS Forums, jumping onto our Teamspeak 3 Server (forum login required to view page), and joining a DCS World multiplayer server for some real interactive training is always a good bet to help you climb up that sometimes daunting learning curve.

A large number of single player missions are delivered with each module and vary greatly in complexity and difficulty. “Courier” is my favorite mission for the Ka-50 module while “In the Weeds” is in my top 5 for the A-10C. Be sure to read the briefings carefully to ensure you’re getting every aspect of the experience that the mission designer intended you to have.

In the campaign mode of DCS World, the player is presented with a mission with specific goals and objectives to achieve. Hint: don’t skip the briefing! The player’s performance in a mission can affect which mission they will play next. Succeed in supporting a frontal attack, for example, and the next mission may be attacking a weakened and retreating enemy. Fail to meet your mission objectives and the next mission may have you defending your own forces as they hastily retreat an overwhelming opposing force. In general, the stock campaign missions are well thought out with sufficiently detailed briefings and an engaging story. “BeachAV8R” gives us a walkthrough of an A-10C campaign here. The reason for the linkage between certain missions isn’t always clear, and the results of your attacks are not persistent (e.g., wiping out an airfield in a mission does not mean that airfield will stay INOP in the next mission), but campaigns like Georgian Hammershow that a good mission designer can string together a good story.

DCS World still offers the same track replay capability that was present in the standalone DCS modules but with the same lack of controls and frail recording system that has inconsistent repeatability for long or complex recordings. There is no ability to start or stop a track recording in flight: you get the option to save the entire flight as a single track file once you end the mission. Likewise, there is no option to start a track at any specific time, nor to rewind or even back up a single frame at a time during playback. The view of the pilot during the original mission is lost as soon as you deliberately change the view during replay and cannot be restored. Since a replay is actually just rerunning the simulation with a given starting point and feeding in a recording of the player’s control inputs, the slightest difference in sim playback will result in a completely broken playback. A track recording of an epic cannon attack on an enemy convoy may play back with your aircraft running off the taxiway before you even takeoff. There are tools like Tacview that offer more robust mission recording and playback options, but this particular in-game feature is sadly not as useful as track replay tools in other simulations.