These were the primary focus of this mod by Team Fusion, so what has been done?

The altitude bug which prevented aircraft from operating at their historically available ceilings has been fixed. Aircraft are now able to fly at historical altitudes, enjoying the historical performance advantages and disadvantages that these ceilings conferred. If you are a mission builder and/or fan of high fidelity in sims, you will rejoice over this long requested fix. 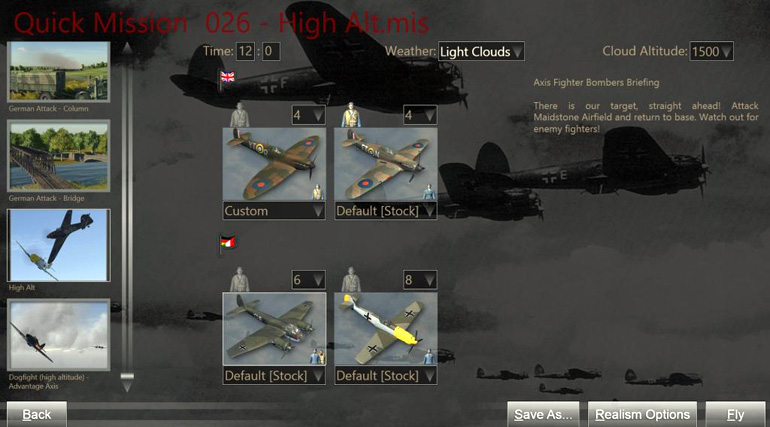 Setting up a quick high altitude furball is easy, and the flying is exhilarating.

Personally, I found the ability to fly and fight at high altitudes is an exhilarating experience and the high altitude quick mission added to the quick missions menu is a good way to experience it. You can set up four groups of fighters on a collision course at 9000 meters / 30,000 feet, or you can change these to, for example, two groups of bombers and two groups of fighters. Missions like this force all the fighter aircraft to stay higher rather than dive for the deck.

Sokol1: “The mod does change the way you manage the engines. Some planes are now more easy; Blenheims at low level can sustain full throttle, boost cut out on, radiator below 50% for a long time with no overheat signal. In high altitude flight there is also no overheat risk. I took a Blenheim to 30,000 feet, throttle full open, boost on, and temps stayed around 170~180.

Spitfires behave similarly; unless you forget and leave the radiator closed, there are no problems with the engine, just don’t use boost indefinitely.

In the Hurricane however, engine management is critical, especially in high-altitude flight. It requires careful handling of ATA and RPM. This means it is getting rare to see any online, while they should be numerous like in the movie ‘Battle of Britain’.

I don’t have much success in the German fighters online, because the Spitfires are always at higher altitudes. But I can still get kills (on Spitfires) that are flying at low altitudes.”

Performance notes from Team Fusion indicate that Hurricanes are comparable to Merlin III engined Spitfires I and Ia’s in their engine overheating characteristics. The Spitfire IIa and its Merlin XII is a special case, and performs differently, as the historical engine had a fully pressurized radiator system, which used a mixed water/glycol mix (for improved cooling) and was therefore much easier to manage. TF has modeled this.

Unfortunately the change to high altitude fighting has highlighted one of the things IL2CoD does not model very well, and that is compression on the control surfaces. In a high speed dive in these WWII birds, speed of airflow over the control surfaces should lead to compression and a potentially dangerous stiffening of the controls, well before wings rip off. The longer and steeper the dive, the stiffer the ailerons and elevators, the harder it is to pull out of the dive. In the IL2CoDstock version, and also in this mod, this is not well modeled and I was able to dive almost vertically from 9,000 meters to 1,000 meters, pull back (gently!) on the stick and level out without any noticeable difficulty.

TF says compression modeling is on their “fix list” for future attention.

G-Force stress on the airframe has been given some attention.

Sokol1: “The new G limits require more caution in handling, and in my opinion some planes break too easily. The Fiat Br.20’s wings break off in level flight during ‘skip bombing’ if you pull hard to avoid hitting a ship mast. Online I have seen a Spitfire wing break off during a maneuver to avoid my 109 attack, at low level. The plane wasn’t in a dive, just pulling a climbing right turn. In a Bf109 you need to ease your dive immediately at the first sign of vibrations or the wings rip off.

It is possible that Sokol1s Spit had taken damage which led to the wing structure failing in the turn, but the matter of the BR.20 was something else, so when Sokol1 pointed it out, I tried to replicate it, with the result displayed below when I pulled up sharply on my first low level run.” 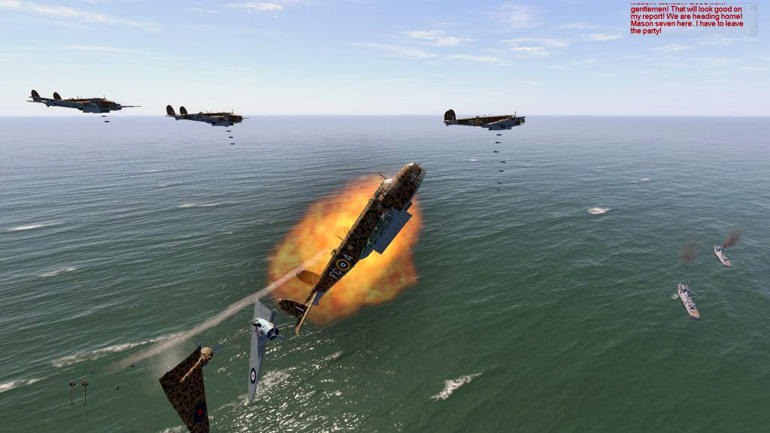 It is very easy to trash your BR.20 in level flight, just by snapping the stick back.

Team Fusion’s lead flight modeler is a former military jet pilot who makes the following observation, “…you need to understand that all you need to exceed a G limit is to be above corner velocity. You don’t need to be in a screaming dive at Vne. So to say you shouldn’t be able to (rip the wings off a bomber in level flight) is not really true… looking at the BR.20, stall speed in game is listed as 126.6kmh. so the corner velocity for the 4G (Ultimate load) is 253.2Kmh. That means at any speed above 253kmh you have the ability aerodynamically to rip the wings off.” TF suggests that players should consider decreasing stick sensitivity when flying bombers to compensate for overly sensitive elevator controls, and they are looking at implementing ‘heavier’ elevator controls for bombers in a future patch.

For now, I can only conclude that implementing new Structural G limits, without compensating for the overly sensitive bomber elevator controls either in the game code, or your joystick setup, creates an unrealistically high risk of self-destruction with some machines.

Textures have been reworked to try to improve FPS. This seems to depend very much on your PC specs. I would venture to say, the lower the system specs, the more likely you will see an improvement in FPS.

We tested FPS using the standard “Black Death” track on the stockIL2CoD vs TF modded IL2COD on our three systems.

My systems / results were:

At the same settings (most effects on high, grass off, trees very low) for PC1 the average FPS on stock IL2CoD was 34, on TF Mod it was 38. For PC2 there was no difference, both versions ran at an average 42 FPS. Both modded and unmodded, and on both these systems, the game gets micro stutters when there are explosions, and slows down when there is heavy smoke onscreen.

Sokol1: “My PC is an Intel I5-3570K stock, 8GB RAM, VGA Radeon HD7970 3GB. I also did not see any performance improvement from the mod, but inconsistent performance seems to be an issue particular to my model of the video card.”

Cloud height has now been extended up to 9500m and cloud icing removed. While it is nice to have a higher potential cloud base for missions, if you enjoyed the cloud icing effect that was present in IL2CoD you will not necessarily like the fact it has been totally removed. Like other graphical tweaks Team Fusion has implemented, I would have preferred to see this effect disabled, with the possibility to enable it again in the conf.ini file.

This is an approach that has been adopted by the BoB Developers Group with most of the discretionary changes (as opposed to bug fixes) it has made to the stock BOBII. These are very much a matter of personal taste, so the BDG allows the user to switch them on and off in the BOBII config file. I strongly recommend this approach to Team Fusion!

Sokol1: “I welcome the new clouds, without the ‘instant freeze’ effect – maybe in the future the dream of dynamic climate becomes possible. Importantly, I don’t notice any performance hit flying through clouds.”