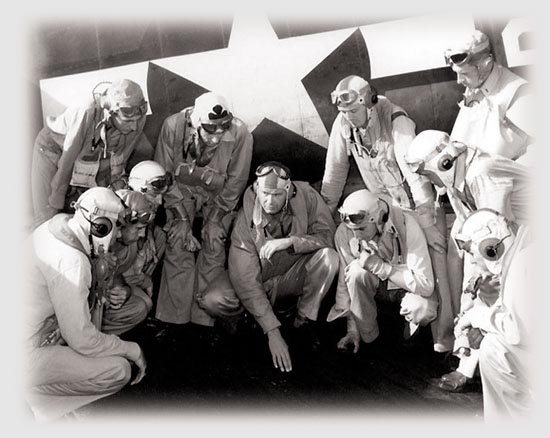 The Jolly Rogers: The Story of Tom Blackburn and Navy Fighting Squadron VF-17

The autobiography of Tom Blackburn, who commanded one of the Navy’s only land-based fighter squadrons of WW II, VF-17 “Jolly Rogers.” Pulled from carrier duty due to initial problems with the F4U-1 / -1A in the carrier landing environment (they had a tendency to bounce and flip over) Tom found a home for his squadron in the Solomon Islands in the summer of ’43. During the next half year, the Jolly Rogers out shot all other units in the theater, racking up nearly 200 kills and making many aces within the squadron’s ranks (they handily out-shot Boyington’s Black Sheep, who were in theater at the same time). Tom’s book is a study in leadership principles, wherein he emphasized teamwork in the air over individual performance. He also kept his squadron “bounced up” (practice carrier approaches and landings while ashore) so as to be ready to use a carrier if the opportunity arose. It did and the squadron was able to make a huge contribution to a particular set of strikes by flying a mission, landing on a nearby carrier to refuel and rearm, then flying another mission. A great read.

This biography traces the life and death of Edward “Butch” O’Hare, the Navy’s first WW II ace-in-a-day and the namesake for O’Hare International Airport in Chicago. Butch was a dynamic character and is well portrayed in the book. Flying Wildcats in early ’42, Butch shot down four attacking Betty bombers and damaged a fifth (he was given credit for five kills at the time) on one sortie in the South Pacific. Since the US was still clearly on the losing end of this new war, Butch became an instant hero and was whisked out of theater to sell war bonds in the states. With meritorious promotion in hand and given command of a Hellcat squadron, Butch eventually made it back to combat in ’44, this time pioneering innovative new night fighter tactics for carrier defense. It was the implementation of these tactics that cost Butch his life in a mysterious accident. The book is a little ponderously written in parts, and is composed in a syntax that feels reminiscent of the period in question. But the story is fascinating and a definitely worth the time.

No, this is not “Baa Baa Black Sheep” by Greg Boyington. Bruce Gamble is an ex-Naval Flight Officer (NFO) who has painstakingly researched all available wartime documentation and after-action reports from VFMF-214 and interviews with surviving pilots, flight surgeons and intel officers. Originally named the “Swashbucklers,” VMF-214 was a modestly successful F4U-1 unit until a shameless Greg “Gramps” Boyington (Pappy is a “media-ism”) virtually stole the squadron while the Swashbucklers were on leave in Sydney. For those familiar with the TV series (who isn’t), most of the premise of that show is false and so noted by Gamble in the book. What emerges is a story of a man (Boyington) who is truly a “break glass in case of war” kind of guy — superb wartime leader, but borderline criminal by any peacetime definition. This book is absolutely spellbinding, and the combat descriptions are very detailed from the resources available to the author. All of the myths about Boyington (mostly spread by himself) are debunked in this superb book. A must read for Corsair fans (like me).

The Black Sheep One: The Life Of Gregory “Pappy” Boyington
By Bruce Gamble
Presidio

If you’ve ever read Greg Boyington’s autobiography “Baa Baa Black Sheep” or watched the TV series ”Black Sheep Squadron” and thought you knew who Boyington was and what his life was really like — forget it. You don’t know anything — yet.

Leveraging his research of VMF-214 in WW II, author Bruce Gamble expanded his search for information specifically on the life and times of Greg Boyington the man. What emerges in this book is a utterly fascinating human interest story of a true “Break Glass In Case Of War” individual, a wild character who in peacetime was a borderline criminal and outright liar but under the pressures of world war became an inspired leader and deadly warrior in the skies over the South Pacific. Gamble starts the tale with the stories of Boyington’s grandparents and parents. Boyington’s life is then covered in delightful detail, including his childhood, his pre-war military service and family life, his actions in WW II both as an aviator and POW, as well as his post-war years and his time as technical advisor to the TV series. The book concludes with his death and the tale with Boyington’s children. Gamble’s extensive research and exciting text paint a more robust picture of Greg Boyington than we’ve ever seen before, and in the process we find that most of what we thought we knew about this WW II hero was incorrect. What emerges is a story in contrasts about a larger-than-life character whose strengths and weaknesses were as over-the-top and divergent as any fictional movie character. This is one fascinating book about a truly human war hero, and I highly recommend it.

John Bruning’s “Jungle Ace,” ranks without a doubt as one of the best biographies that I have ever read. The author spent several years painstakingly researching this book, and it shows in the incredible level of detail contained in these pages. Reading more like a fiction piece than a biography, the book highlights John’s ability to tell a story with just the right word selection to paint a vivid, movie-like picture in the reader’s mind. “Jungle Ace” follows the life of P-38 fighter ace Jerry Johnson from schoolboy to aviation candidate to grisly combat conditions, all in amazing clarity that will immerse you into the story, as if you were standing side by side with Johnson himself. As tense and taughtly written as a best-selling fiction novel, author Bruning has created a story that even non-aviation history buffs will enjoy thoroughly…

For those readers looking to see just how demanding, unforgiving and gruesome air combat in the steaming jungles of the South Pacific islands could be, this is the book for you. “Jungle Ace” is a rich, vivid and thoroughly honest chronicle of a young Oregon man who helped save the world. A rewarding read that goes beyond the military history genre.

Now the deputy director of aeronautics at the Air and Space Museum, Don Lopez was once a fighter pilot in the CBI (China/Burma/India) theater during WW II. Flying by-then outdated P-40 fighters in 1943/44, the author takes us through his flight training and eventual combat experiences in the skies of China. An interesting read.

The Osprey Warrior series’ focus is to tell you what it was like to train to become, and operate as, naval aviators for the US and Japanese Navies, respectively, during WW II. The focus is on entrance requirements, training regimens, living accommodations and aircraft capabilities during the conflict. These are also fascinating reads, and can help you to better understand what it was like to be in these two warfighting organizations during combat.