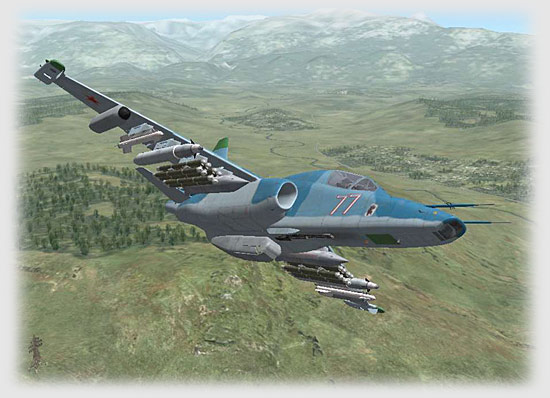 The Su-25T has access to the first true low-light level vision system in Flanker history. The Russians use a system known as Mercuriy to allow use of optically launched weapons in low-light conditions. Mercuriy is sort of a giant, aircraft-carried version of the AN/PVS-4 Starlight Scope that American soldiers got used to in Vietnam days. Bringing this online gives you the ability to add image intensification to the IT-3M display. You can lock and fire at night with it! You can even navigate, like an American A-10 pilot using an IR Maverick for hip-pocket night-vision in the days before NV goggles became standard for U.S. pilots. You can track targets with gun pods day or night, using the Shkval and Mercuriy together. 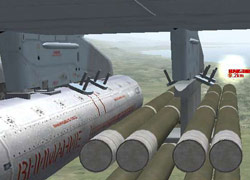 The selectable gun pods will actually track targets you lock with the system!

Want more eye-candy? They’ve worked on the KMGU-2 canisters. These are like giant mobile bomb-bays. For the first time, Eagle has engineered these so that you can see them open and drop AO-25 or PTAB bomblets! Also, some of the other Russian bombs have all-new 3D shapes.

The cockpit is all new and well executed. You can see switches and levers move as you execute keyboard commands. The IT-3M monitor is easy to use and very legible. View limits from the pilot’s seat have been enhanced in the T, and you have a realistic aft view now. This also translates to the other aircraft in-game.

A new thing for the Russian air to ground bird is the new modernized HUD. The Su-25T has several of the combat modes you’re familiar with from the MiG-29 and Su-27. All the main navigation modes are present, including the “HAB” navigation view, the “MPW” en route mode, the “BO3B” return mode, and the “nOC” landing mode. The bird has an air to air combat mode using FIO to target IR missiles, and it can carry both R-60 and R-73 air to air missiles. It has the familiar “zem-lya” air to ground mode, and the “Setka” grid mode as well. You won’t have trouble getting used to the Su-25T. And you’ll like this: ripple-release modes and timing, like in the A-10, are now present and active in the Su-25 and -25T. Russian air-to-ground is in da house now, baby!

You’ll notice a different flight model. In FC, Eagle has implemented the much-ballyhooed “advanced” flight model. Frankly, it feels in flight much the same as before, only smoother, particularly in the slow-speed, high-angle of attack flight regimes. The Su-25T is more stable at slow speeds and in the landing pattern than the version 1.02 Su-25 was. It is rock-solid in bombing runs at low altitude. Conversely, it will take you a few takeoffs and landings to get used to its behavior there, especially in a crosswind. You’ll run right off the runway at least once in a landing, I promise you. These aren’t scripted any more. It’s a lot like IL-2 in this department. If you have trouble getting a Bf-109 down in one piece in IL-2 Sturmovik: Forgotten Battles – Aces Expansion Pack, you’ll be swearing at the Su-25 and Su-25T now, because both have the new FMs. Wind effects on the Su-25 and -25T are different, and the transition between turbulence states at altitudes is more realistic. I have flown through layers of turbulence that seems to smooth out as you gain altitude, just like in a real airplane! Even the way the pilot experiences “g” forces is different with the new FM, and it has a good seat-of-the-pants feel to it. You don’t randomly gray out anymore. The legacy aircraft are still utilizing a scripted flight model and you’ll see the hated “suck down” landings for them still, though I can tell you that these have been tweaked, because the MiG and Su-27 have a different and more fluid “feel” to them and I think the Su-27 in particular retains energy better than it had before.

The Su-25 and Su-25T have a new and more realistic autopilot. Several different modes are present in the game, including pitch/roll hold, barometric altitude/roll hold, radar altitude hold, return to level flight, and fly to nav point. The Su-25T has the SAU-8 autopilot, with route, landing, and combat (tracking a point that the Shkvalis locked onto) modes, as in the real aircraft.

The damage models have also been enhanced. You can have single-engine fires, now, and see pieces of the structure blown off rather than whole wings and whole tails. This is less obvious in the legacy aircraft in game, because the new features have only partially been implemented for them.