Well, the higher ups are saying that soon we might come in contact with Japanese Forces. I know that judging from the work of the crew we might see some action very soon. It is hard to believe how much things have changed in just six months. We have been through so much as a crew, first the threats outside of Pearl Harbor, the narrow escape at Coral Sea, then the rapid repair and redeployment. This mission looks to be even deadlier than the one we faced near Port Moresby…

Let’s face it; there has been something of a vacuum when it comes to the Pacific Theatre. The last really, really good flight simulators that emulated the PACWAR was the venerable Aces of the Pacific and 1942 Pacific Air War. Both of these games significantly improved and advanced the genre. It is sad that these games were released in 1993 and 1994 respectively. Since that time there have been only a few games devoted to the Pacific Theatre.

Some had the Pacific added as part of a larger game. Air Warrior II and IIIs’ boxed sets had a Pacific Theatre setup that was playable, if not really that inspired. EAW was modded to allow for Pacific dog fighting but the engine really wasn’t totally up to the task. The only real PACWAR flight simulator released since 1995 was Microsoft’s Combat Flight Simulator 2, a game that did a lot really well but left a lot of things to be desired. Sadly this game, although fun at times, just couldn’t fill the void that was left after 1942 PAW.

In 2001 a company called 1C games released a title called IL-2: Sturmovik, a title that received acclaim from critics and from consumers. Taking aim at the little seen Eastern Front and the seesaw battles that were fought on this relatively forgotten theatre (at least in the West) the game introduced so many new innovations and improvements to the genre that it is hailed as one of the most significant flight simulators ever produced. 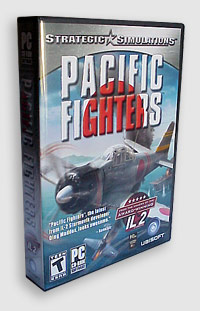 Well, in what has to be the final utilization for the IL-2 engine, Oleg Maddox, Ilya Shevchenko and company have released Pacific Fighters, an either stand alone or companion game for IL-2: FB / AEP that attempts to finally fill that gap that has been missing in the Pacific Theatre. The game looks to add to the successes that IL-2 and Forgotten Battles have brought to the genre. Whether the game lives up to expectations is yet to be seen.

As sold, Pacific Fighters comes in the latest trend — the small size jewel case that is the rage these days. What is nice about this is the small storage size but what is bad, of course is the relatively small manual that comes with the game. Let’s face it, the day of the substantial manual is long gone and probably will never return. The manual for Pacific Fighters weighs in at a paltry seventy pages. In reality, this manual would be a quick start manual for one of the old Jane’s games from just four or five years ago.

I guess I might as well just deal with it, the days of the really good EAW or Longbow2 manuals are long gone. The manual that ships with the game is fairly informative and does show how to use some of the new features of the game. For its size it’s not bad, it just that it really is small and as an old flight sim snob I can’t get past that. I know it’s a cost saving thing — I just don’t like it. 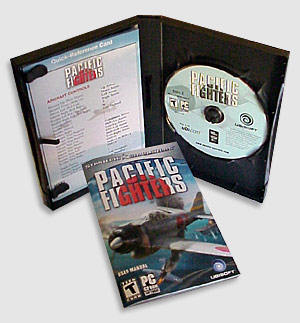 As for the rest of the package you get two CDs, a key card and some discount fliers for Alienware and for Naturalpoint. Naturalpoint offers a whopping 30 bucks off of its TrackIR3 head tracking device. Since the TrackIR is a fantastic device for IL-2 (note: read SimHQ’s TrackIR reviews here and here) it only seemed natural that Naturalpoint tied itself to Pacific Fighters (PF). How it works with PF is yet to be seen though.

Setup is relatively simple and allows for two different kinds of setups for the game.

For those folks that don’t have Forgotten Battles and the Aces Expansion Pack, Pacific Fighters can be installed as a stand alone game. The stand along version is a fully functional game with all the features of the previous versions of the IL-2 series, but without the aircraft, campaigns or maps of the initial series. One problem with this dual setup is the incompatibility between IL-2:FB / AEP / PF and stand alone PF installations in online play. Basically if you play online you need to make sure that the people you play with are using the same kind of install of the game. Most folks with IL-2:FB and AEP tend to install both versions of the game to avoid any confusion.

Setup is pretty straight forward. The first time you fire-up the game you get the option to pick your graphics resolution, graphics mode (OpenGL vs. DirectX), basic graphic detail and whether you want the intro video to play each time you start the game. Most folks check this part off. The intro video — while interesting the first time you see it — isn’t worth repeated viewings. 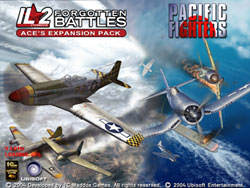 One thing you have to setup — and one major complaint I have about the game — are some of the key commands that really should have been designated prior to release. Some functions, mostly those dating from the release of IL-2:FB, are pre-mapped but many of the functions are user defined and not mapped at all in the game. The ability to map functions is good, don’t get me wrong. What was wrong is that some functions, like releasing chocks on the flight deck, have to be mapped before you can get off the aircraft carrier. This is explained in the manual but it shouldn’t have been that difficult to designate a key press to things like this prior to release. It isn’t a game stopper but it is somewhat irritating.

All the axes used my most HOTAS controllers are mappable in Pacific Fighters. Generally you can map trim for ailerons, rudder and tail controls, prop pitch and mixture levels in the game. Toe brakes aren’t modeled unfortunately so left and right brake controls are still mapped on the keyboard. Overall though the ability to map functions of the game are still quite good and anyone with complicated HOTAS controls should find a use for all their sliders and knobs. The nice thing about this game is that you really don’t need a complicated HOTAS controller to get the most out of this game, a simple Sidewinder is perfectly adequate for playing this game. Sure, if you have the cash for a nice CH Products or Thrustmaster setup won’t hurt — but it won’t put you at a major disadvantage if you don’t have it.