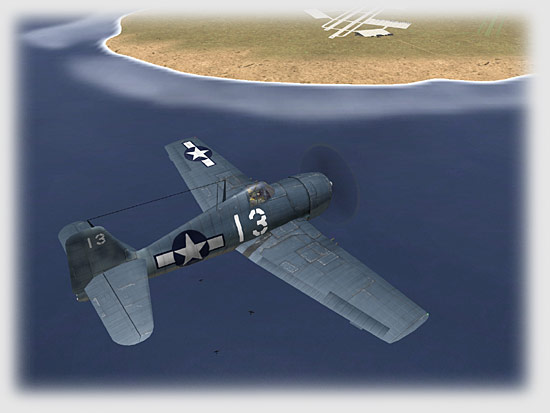 A game can look good but if it plays poorly, it isn’t worth a damn.

One of the reasons that the IL-2 series has been as successful as it has is due to the cutting edge flight and damage models that shipped with the original game. Pacific Fighters is just as top notch, although there are some questions and some concerns — especially with the AI.

Pacific Fighters ships with almost all of the most common aircraft found in the Pacific Theatre. Not all, but most. There are many familiar names, aircraft that were made famous over the skies near Midway and Guadalcanal. There are others, somewhat ignored, that worked their way into the game.

The Allies get the opportunity to fly a representation of some of the greatest warplanes ever created. Aircraft include the three variants of the venerable F4F Wildcat, two models of the F6F Hellcat, two variants of the SBD Dauntless, and four variants of the F4U Corsair (actually seven if you include the Royal Navy subtypes that were used aboard their carriers). The Brits get a Seafire for its carrier task forces as well as the Bristol Beaufighter Mk 21. The USAAF gets a flyable B-25J and A-20G.

The Japanese get to fly the cream of Japanese Army and Naval Aviation. The A6M Zeke (Zero), introduced in the a5 version in an add-on in the Aces Expansion Pack, gets many more variants to include the type 21 version of the A6Ma2 (folding wingtips), a3 and a7 variants. The Ki 43, considered the most maneuverable monoplane fighter of the war, enters the fray. The Ki 84, 61, and 46 are in the game. The J2M3 Raiden, and aircraft that I have never seen in a flight sim, is in the game. The D3A Val makes its appearance in the game for those folks that want to do some dive bombing.

The most interesting is a float plane version of the A6M, a slow maneuverable aircraft that actually performs well in the game. Why it performs well will be discussed in a minute. In general you get almost a perfect representation of the aircraft that took part in the major battles of 1942 and 1943. Why do I say almost? Well, notable in their absence are the TBF Avenger and the B5N Kate as flyable in the game. The TBD Devastator wasn’t even included in the Initial release of the game although there are plans to add it soon… well, maybe not. There looks like a snag with any inclusion of aircraft from Northrop Grumman. This means that any new aircraft, like unfortunately the TBF Avenger, may not make it into the game. What this means for the Kate or for the Devastator is unknown at this time.

I hate to say this, but the lack of flyable carrier born torpedo bombers has to be one of the biggest disappointments I have in this game. I can understand the potential difficulty in finding cockpit data for the Kate or data in general about the Devastator, but there are dozens of flyable TBF and Ms models in existence. There is nothing more knuckle whitening than trying to take a slow predictable path at an enemy capital ship so you can launch your torpedoes. Its not that torpedoes aren’t modeled in the game. Both the IL-2 He111 and Beaufighter carry torpedoes in the game.