While “Uther” took The Last Days through its paces I had a chance to fiddle with Fall Blau; or the Anglo named Case Blue mission and campaign pack. You will probably notice that I will use the two terms interchangeably in the review. Most people, even us evil Yankees, call it Fall Blau. 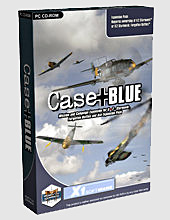 Fall Blau concentrates on the southern aspect of the war, most notably the fight for the Crimean Peninsula, the drive on Stalingrad, and the inevitable fall back until the loss of the Crimea in 1945. Some of the more notable battles occurred during this time, to include the siege and capture of Svestapol and of course the pivotal battle of the Eastern Front; Stalingrad.

Overall I had a positive opinion of the work done. While spending 20 bucks for a load of missions may be deemed too much, especially with some of excellent individual work being done; others may find that the twenty is well spent when you consider the number of individual mission available in Case Blue.

Case Blue ships with 350 plus German missions, over 200 Soviet missions and a large variety of USAAF and British missions in the North African area. The USAAF and RAF missions were added as a patch for previous owners but ship automatically with the Matrix Games version. Like TLD, Case Blue can be purchased via electronic download or you can order a CD, or you can do both. This is probably a trend to the future, especially for niche products like TLD or Fall Blau. Five years ago I would have been more critical of such a method but with broadband Internet becoming almost the norm these days it isn’t such a hard thing to deal with anymore.

While Doug (“Uther”) had some trouble with the hardware requirements for TLD I didn’t seem to have nearly the difficulty. I suspect that the biggest problem with The Last Days (I didn’t spend as much time with this title-yet) was the large number of items that “Tankeriv” and his pals are putting into each and every mission. While I enjoy the immersion of a large number of items, to include ground and seaborne threats, I am a realist and know that the IL-2 engine eats even decent machines for lunch when too many of items are included.

The missions I have flown in Fall Blau seem to have a pretty good mix of ground objects and airborne threats. Most missions I have flown (offline) have had at a minimum twelve to twenty enemy aircraft. This means that most of the time you will see somewhere around forty enemy aircraft duking it out. In addition you can normally see some pretty decent ground and seaborne action going on. Some missions have little or no enemy aircraft but a large number of ground threats. For example, one of the last missions of the campaign has you attacking seaborne threats massing near Sevastapol. I found little if any air activity in that particular mission but there was plenty of flak to keep me busy.

One other problem I have with the campaigns is the inability to jump into a campaign at a different time while playing the Russians. The German side appears to be much more fleshed out than the opposition side. The Germans have five different starting points, ranging from the beginning to the end of the conflict. In addition you have more flexibility in choosing your mount. The German campaigns can have you flying a Bf110 on fighter and fighter-bomber missions or bringing the Bf109 into play against the VVS.

Unfortunately you really don’t get this as the Russians.

Essentially you start a campaign from the beginning, which is fine I guess but if you don’t want to fly the Rata you really have no choice, other than by playing the campaign as single missions or by modifying the campaign in the mission builder. This really tells with the Russian campaign where you spend the first few missions literally running for your life. I think the ability to jump into a campaign in 1943 or 1944 should have been an option, especially from the Russian side.

So, as far as the campaign aspect goes, the Russian side was something of a disappointment to me. I know this is a German created product, and that the interest I am sure was directed toward the Luftwaffe side for that reason, but the lack of polish and variability for the Soviet side is something that should be corrected, especially in a U.S. release.