With the pushback complete I take a look around the virtual cockpit. Level-D has done a superb job of working within the limitations of the VC with a detailed and functional cockpit that looks very good when panning around. It slows my mediocre system to a crawl and as a self-confessed anti-VC person I’ll probably rarely use it. 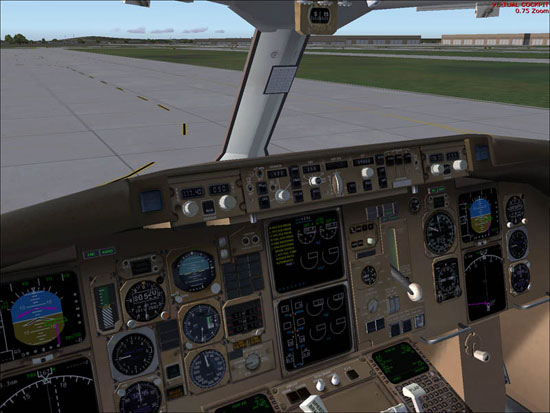 Before staring the engines there are some final pre-start items to cover: turning on the cargo bay heat, turning off the pack switches, setting the stabilizer trim, etc., Pulling up the status page on the bottom EICAS I check the flight control movements. 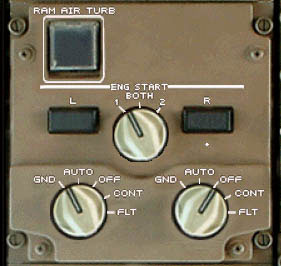 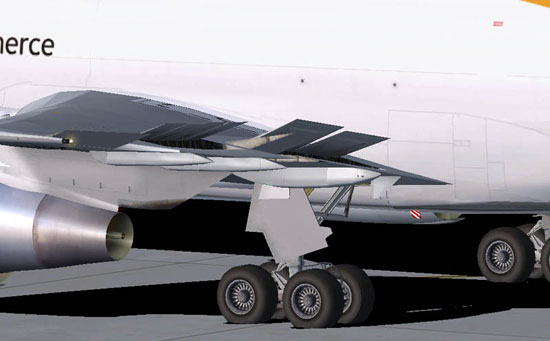 Cleared for engine start by the ground crew and informed by the cabin crew that they are ready for departure I initiate the engine start sequence by rotating the left engine start switch to GROUND. Watching the EICAS engine instruments I wait for 18% N2 and reach below the throttles to move the fuel control lever to RUN to allow fuel into the engine. 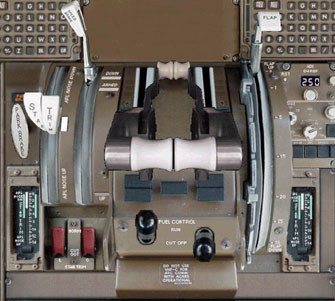 The engine lights off as confirmed by rising N1, N2, EGT, Fuel Flow, oil pressure and temperature on the EICAS. 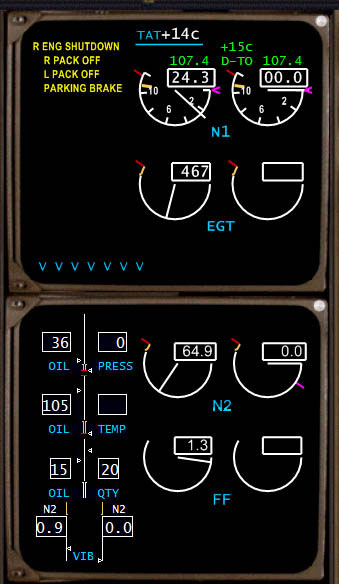 Repeating the process for the right engine soon both engines are running and providing all of the necessary electrical, environmental and hydraulic power allowing me to shut down the APU. A thorough check of the overhead panel assures all the systems are up and running, configured for flight. 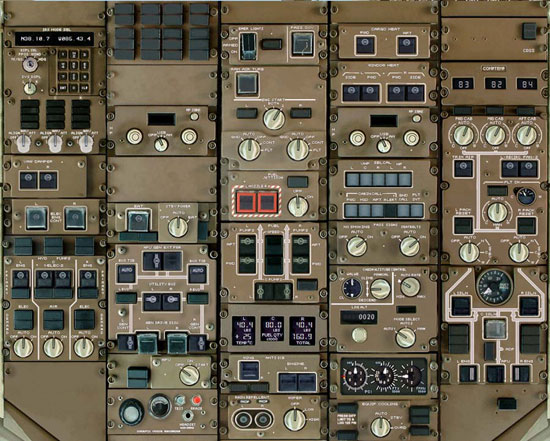 I run the flaps out to the recommended 5 degrees for take-off and re-verify the computed stabilizer trim setting. 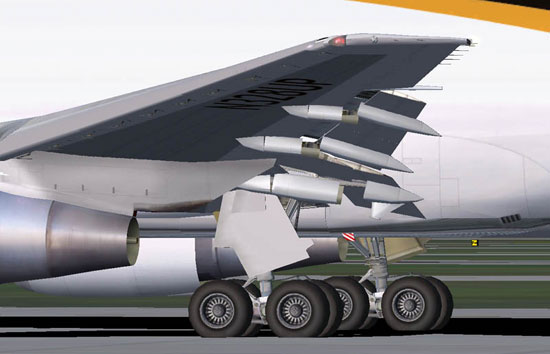 One last time we check the TAKEOFF REF page on the FMS and enter the takeoff gross weight which should match the previously computed gross weight. 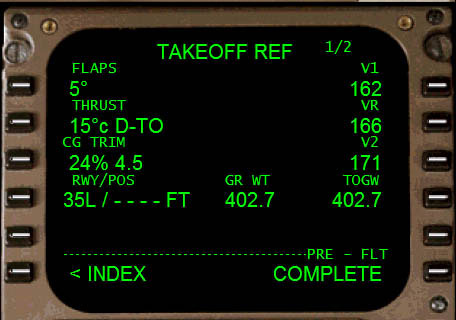 Down on the center pedestal I enter our squawk in the transponder and turn the knob to TCAS RA/TA (Traffic Collision Avoidance System in Resolution Advisory/Traffic Advisory mode). 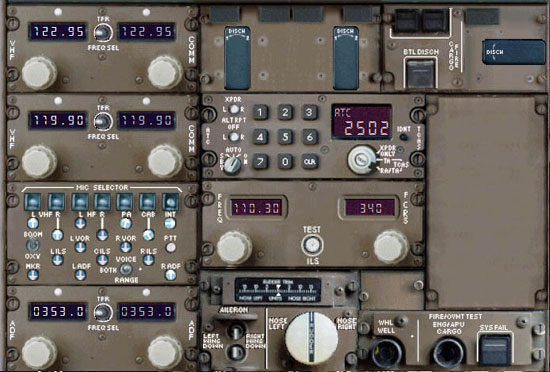 I taxi into position for take-off, turning on all the aircraft lights and arming the auto-throttles. 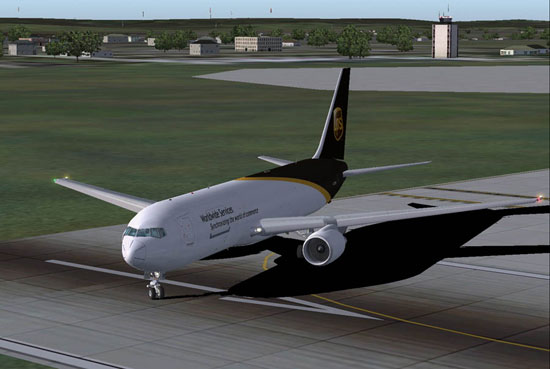 Cleared for take-off I push the throttles forward to approximately 70%, then select N1 mode which allows the Thrust Management Computer (TMC) to take control of the engines and set maximum takeoff power for the aircraft. The TMC can be set to several different settings if you want to de-rate the engines, different climb settings, cruise, etc., all of which Level-D modeled. 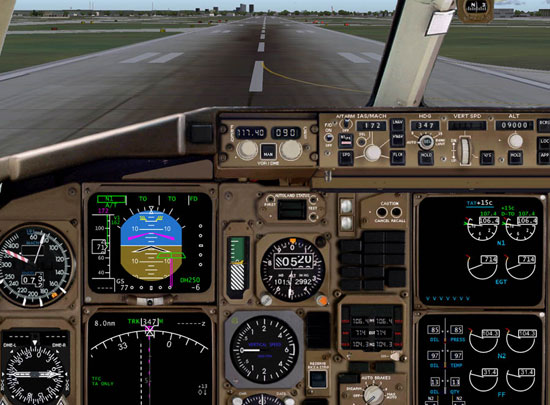 It seems to take forever to reach V1 and I notice I’m quickly running out of concrete. Further study of take-off distances at high gross weights is obviously needed by this 767 pilot. Eventually Vr appears and I haul back on the wheel (now a bit panicked at my lack of runway remaining) and the aircraft breaks ground just at the end of the pavement. Nice planning Captain. Of the two longest runways at SDF I chose the 8,579′ 35R instead of the 10,000′ 35L. Thankfully I have a competent and extremely helpful virtual First Officer working with me. He calls out the V speeds and automatically selects the flaps to the proper settings based on the speeds his ham-fisted Captain is flying! Level-D has provided a multitude of realism options in their pull down menu and includes several different voices for both the First Officer and the cabin crew (or you can turn them off altogether if you prefer). The gear retraction animation is superb. The 3D modeling of both the airframe and the external moving parts is top-notch with fine attention to detail. 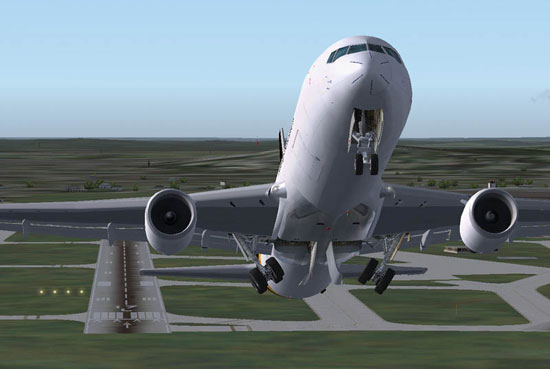