Phoenix Simulation Software has been in the game for some time now. With a diverse collection of aircraft ranging from the Airbus A330/340, the Concorde, the Dash-8 and the Piper Seneca, PSS have tackled aircraft large and small. For our purposes we will be looking at the PSS Airbus Pro package which includes the Airbus A319, A320 and A321. 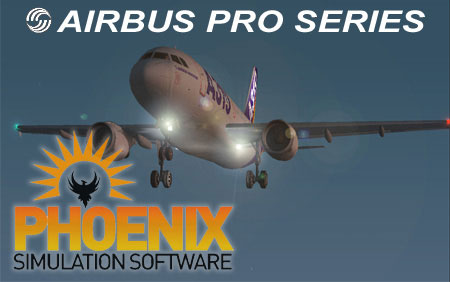 The Airbus A320 is where the Boeing vs. Airbus ideology finally came to a head. With the A310, you basically had a similar product to Boeing aircraft, albeit with new innovations and design philosophies. Introduced in 1984, the A320 departed from conventional commercial aircraft design by banishing the conventional control yoke and replacing it with a side-stick controller reminiscent of the F-16 Falcon. With a “fly-by-wire” control system a tremendous weight savings and reduction in parts was realized by removing the traditional system of cables, pulleys, and pushrods associated with conventional aircraft. Pilot control inputs are directed to flight computers which interpret the commands and send the appropriate commands to the flight control surfaces. Sometimes referred to as “fly-by-proxy” many people were skeptical (and remain so today) of the concept that the computer has the final authority as to the control of the aircraft. We will touch more on that subject in Part V of our series, so bite your tongue and step away from the keyboard!

The PSS Airbus Pro package includes several derivatives of the original A320 design: the smaller A319 and the stretched A321. In addition to the airframe variants, PSS models the proper engine options for each airframe including IAE and CFM engines. The livery options for the PSS Airbus Pro package is one of the most extensive I’ve ever seen for Flight Simulator with beautiful repaints for almost every imaginable operator out there.

Documentation consists of five separate PDF files that you will immediately want to rename to more user friendly file names since they come labeled as Part 1, Part 2, Part 3, etc. I renamed them for what they actually contained: Setup/Introduction, Aircraft Operating Manual, Performance Charts, Tutorial Flight and the Systems Manual.

As with all of these complex FS add-ons, reading the manuals is not an option, it is essential. Fortunately for us, the PSS team did an absolutely outstanding job on their documentation. The Aircraft Operating Manual runs 86 pages and starts with limitations (logical) and goes on to describe the aircraft systems and how they are normally used. Interspersed throughout the AOM are interesting and helpful informational tips called “Airbus Gotchas” that show common errors in pilot technique or suggestions on how to best utilize the systems in the Airbus. 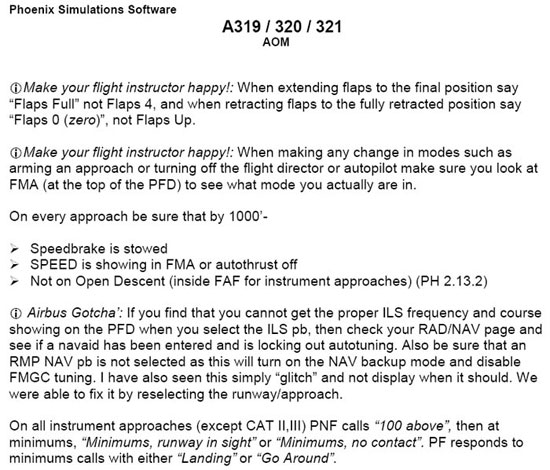 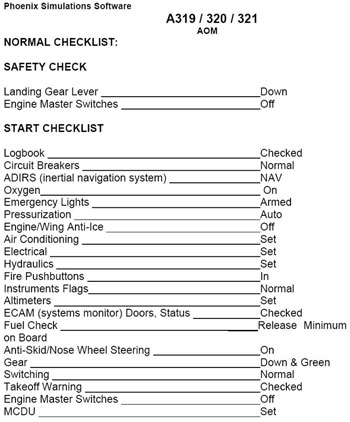 The Systems Manual runs 89 pages and unlike the Operating Manual it details how to actually fly and use the systems as implemented in the PSS Airbus. This Systems Manual is one of the best formatted and valuable manuals I’ve ever seen in any product. The descriptions are complimented with excellent full color diagrams and pictures which increase comprehension of the systems ten-fold. 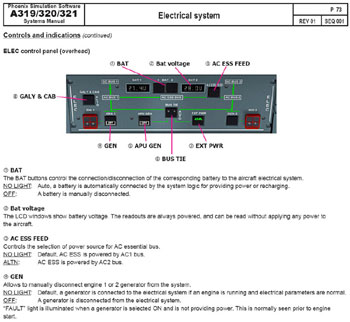 The Tutorial Flight Manual is a 30 page text only description of a normal point to point flight in the Airbus complete through start up and shut down. Obviously the other manuals supplement this one since quite often the tutorial glosses over things that are covered more in depth in the other manuals. 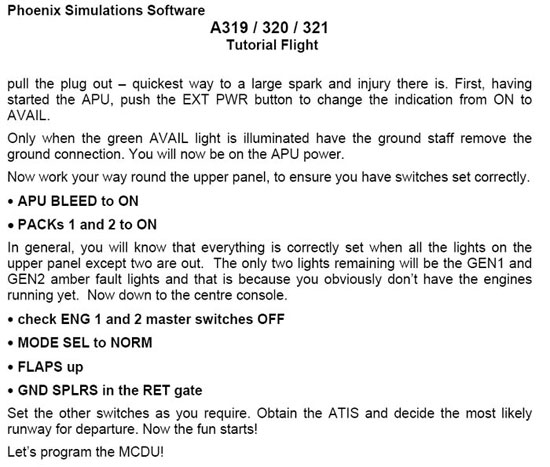 Since Airbus Industries is a French company and a European consortium, I branched out a bit and decided to fly this flight in a more appropriate setting. Our flight today will take us from the Airbus factory headquarters in Toulouse, France (LFBO) on a sales demonstration flight to London City, England (EGLC).

The PSS package comes with a nifty fuel planning module into which you simply plug in different variables to arrive at a recommended fuel load-out. After churning out the results you can print the results as a reference during your flight. 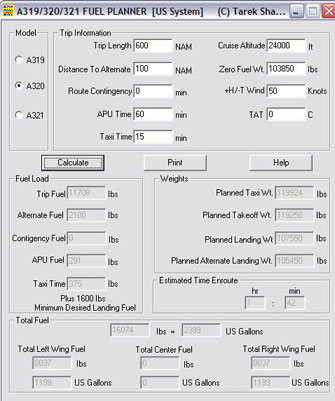 For our approximately 600nm flight the fuel planner came up with a fuel load (including alternate fuel and other miscellaneous factors) of 16,074 lbs. 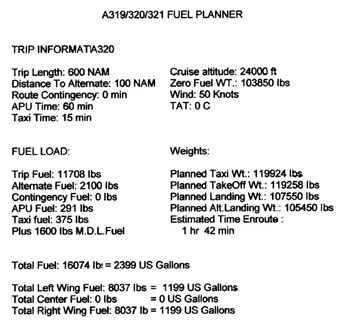