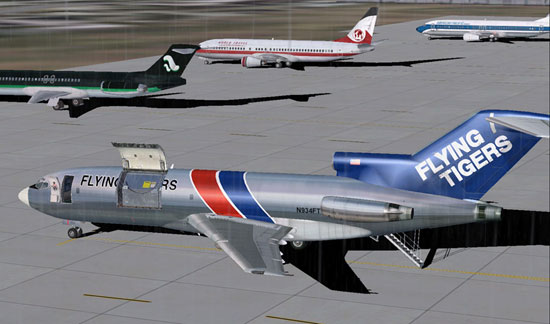 Our 727 is fresh out of “C-checks” and we’ll be flying a load of cargo for Flying Tigers from Boeing Field – Seattle, Washington (KBFI) to Telluride, Colorado (KTEX); a flight of about 880 nautical miles via the jet airway system. Climbing up into the cockpit I plop down in front of a panel that has probably been around longer than I’ve been alive! The “cold and dark” cockpit of the DF727 isn’t nearly as “cold and dark” as modern cockpits. Unlike glass cockpits, the old analogue “steam gauges”, even with the electrics off, still show data of varying accuracy. 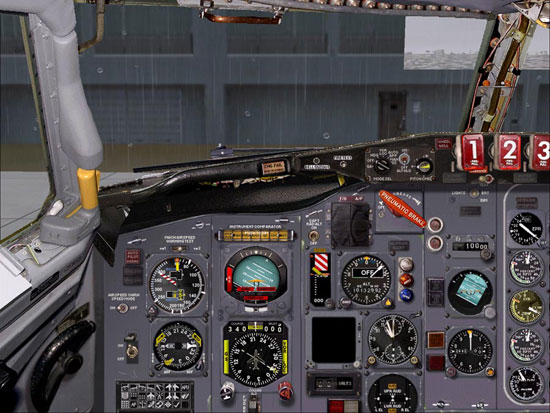 The First Officer’s panel is similar to the Captain’s side with the exception of the center “shared” portion, which shows the landing gear handle and inboard and outboard flap indicators among a few other items. 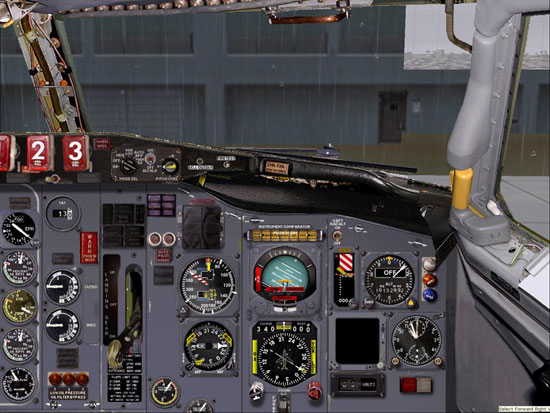 Hitting the F10 key brings up the in-sim kneeboard, which fortunately has all of the checklists for all phases of flight. The F10 checklist is useful once you’ve familiarized yourself with the switch locations and functions using the expanded checklist. Use of the checklists is almost mandatory unless you have a wealth of experience and familiarity in the 727. 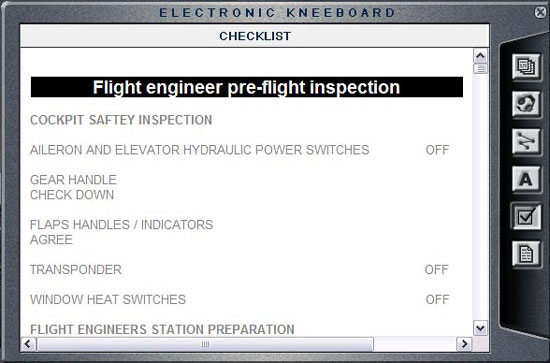 The multiple views and crew position panel views can be managed using the useful icon menu to quickly jump from one station to another.

Looking up from the Captain’s panel brings the overhead panel into view. Composed of a bewildering array of switches, knobs, selectors and lights, the overhead panel contains many of the in-flight controls for systems that the pilots would want to activate or control. 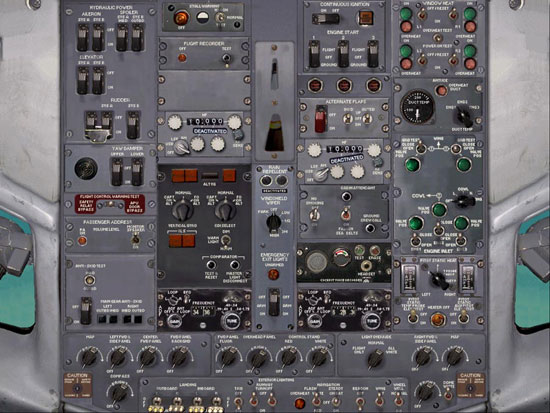 The Flight Engineer is compensated for his lack of flight controls with a wealth of buttons and knobs to push and turn. The FE has so many things to do in fact, that he has two dedicated panels, the upper and lower panel. The upper FE panel consists mainly of pressurization and bleed air functions and electrical power generation and distribution. 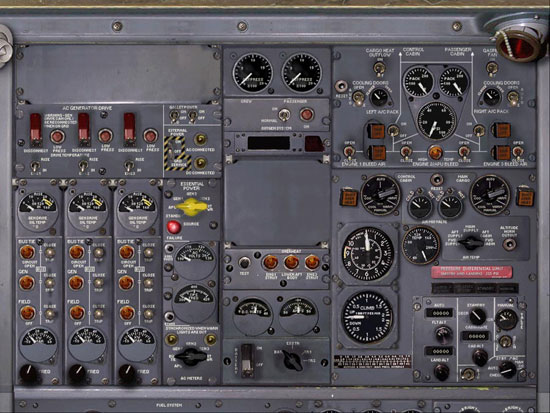 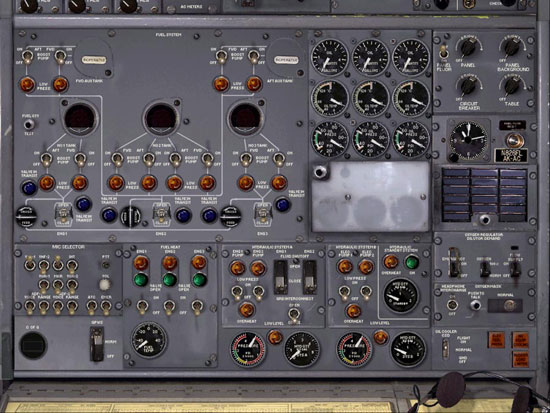 Following the checklist I turn the battery on and start following the step-by-step instructions to verify that all the cockpit switches are set in the proper positions for each phase of the pre-flight. Many of the switch settings prior to engine start are counter-intuitive or just things you might not think of which is exactly why the checklist is so detailed and thorough. Here I’m verifying that the aileron and elevator hydraulic switches are in the OFF position; we wouldn’t want to crush or maim any of the ground handlers or fuelers! 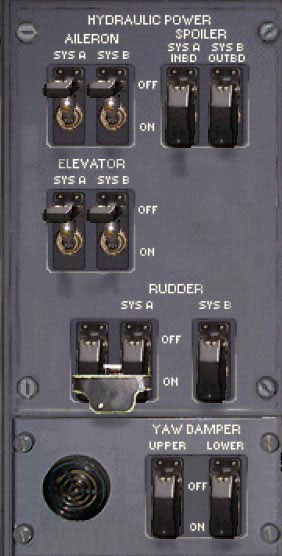 With the battery selected ON the upper FE panel lights up indicating the offline status of the generators, bus ties and field relays. Additionally, the upper-right bleed air system lights and gauges indicate the lack of any bleed source coming from the engines since no engines are running. 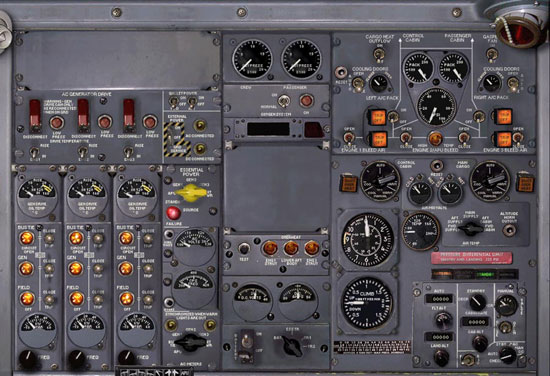 While the ground crew continues to load our cargo I start the long process of getting the aircraft ready for flight. As with all transport category aircraft, one of the essential things is electrical power. Following the pre-flight checklist I crank up the APU using the APU control panel. 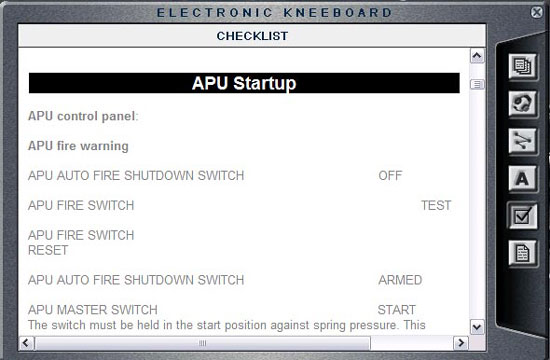 Pressing and holding the APU start button spins up the APU and I observe the temperature rise and eventually the power starts registering on the APU ammeter indicating the APU is producing electricity.

Closing the bus ties provides a path for the APU electricity to power all of the busses normally powered by the engine driven generators. 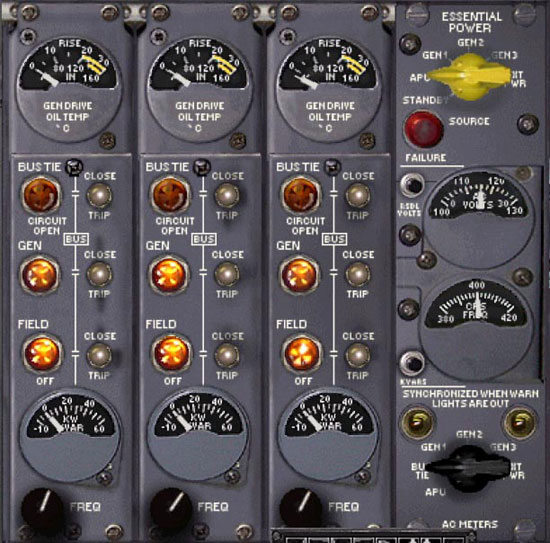 The APU provides not only electricity, but air as well, apparently using the Engine #2 ducting to provide cooling or heating air to the interior of the aircraft. 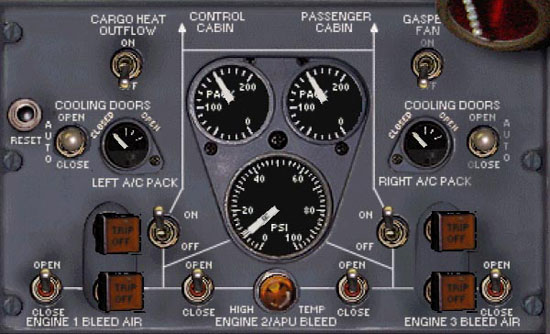