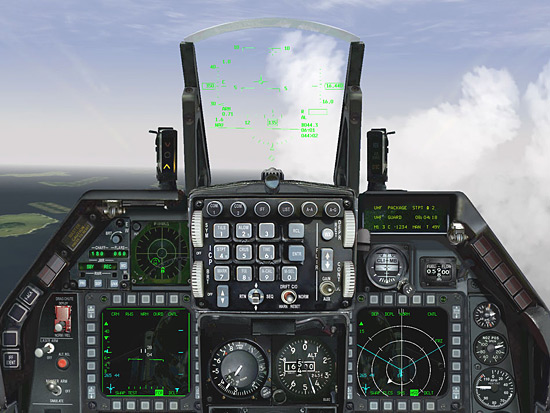 Q. The screenshots look great, especially the aircraft and cockpits, the bases, and the clouds. Three sub-questions to this one…

a) Is that an Aeyes Cockpit?

b) The bases are very detailed, lots of objects, buildings, trees, but as you move away from the bases, not so detailed. Is the basic terrain out from the bases primarily stock F4? If so, is there any consideration to adding something like Tom’s HiTiles?

A. The airbases have been greatly enhanced and the terrain tiles redone. If you compare one particular tile with those straight out of Falcon 4.0, the difference is noticed immediately. Present day Falcon pilots will not be disappointed.

c) The clouds look like a Graphsim contribution, possibly from Hornet OIF, is that right?

A. They are clouds created in-house by Lead Pursuit’s development team and dynamically shaded by the enhanced graphics engine.

Q. Who is the “market” for F4:AF? Serious flight simmers, general interest? Or is it scalable for both?

A. Lead Pursuit is made up of hard-core flight simulation fans so the hard-core element is part of our DNA. Falcon also has a huge hard-core fan base as part of a fantastic community.

But we’re totally committed to introducing new players to Falcon and get them as excited about the game as we are. We all started as fans of Falcon 4.0 and the previous Falcon releases, so naturally we would like to get others involved too. Simulations are a niche market, so it is vital that “new blood” is brought in so that the product can thrive.

The proper way to introduce new players to the more advanced modes is not to make them frustrated, but to gradually train them how to use the hard-core features. For instance, as a part of Allied Force’s development, we spent time adding optional features such as “easy targeting” keystrokes to allow new players to quickly get into the game to “shoot things up.” As they get into the game, many of them will start to gain more appreciation for the depth that is to be found by turning off the easy options and turning on the realistic ones.

In the larger picture, making something accessible to new players has very little to do with “dumbing down” the game and everything to do with properly introducing and explaining how to exploit those realistic features. This was our mission for Allied Force, and it will continue to be.

A. Retail box only.

Q. Are you using any copy protection technology such as StarForce?

A. None such as StarForce.

Q. Will it be necessary to use the source disk while playing?

A. This is to be confirmed shortly.

Q. Speaking of the source disk(s) will F4:AF come on CD, DVD or both?