To kick off the three-day “Corsairs Over Connecticut” show (June 3-5 in Bridgeport, CT), event organizers planned a once-in-a-lifetime event; a symposium of Corsair pilots, including some of the most well-known squadrons and aces, set right in the shadow of the factory that turned out thousands of Corsair variants during the war. I had the honor and the privilege of attending.

What had been advertised were presentations by eight Corsair pilots, however by the time the program began, the dais boasted nearly a dozen. Seated in one of the airport’s hangars, with camouflage netting and an enormous American flag as a backdrop for the pilots, the more than 250 people in attendance were in for a real treat.

Setting the mood for the evening, two of the five Corsairs which would spend the weekend entertaining the crowds were parked outside the open hangar doors. Under an increasingly dreary sky were FG-1D Corsair “Skyboss,” (BuNo: 67089) from the American Airpower Heritage Museum in Farmingdale, NY, and the Connecticut-built F4U-4 (BuNo: 97388) of the Tri-State Warbird Collection in Wahpeton, ND.

As I walked into the hangar to find a seat, I couldn’t help but notice a few vets running their hands over the wings and fuselage of these gorgeous warbirds. One of them, who I later learned was Corsair pilot Bill Hereford, would speak later that evening, but for now he was telling his own family and a crowd of visitors about his wartime exploits. Answering one question, Hereford described strafing runs in the Corsair and the feeling of racing only 25 feet off the deck after targets. 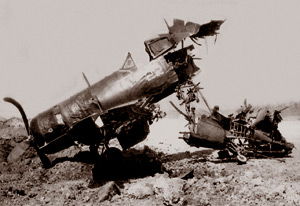 Hugh “Yogi” Irwin of VMF-251 was the first to speak, and told his story of a near-disastrous landing after flying close air support for the Americal Division in the Philippines.

“Most of our missions were close air support. On this particular mission, I was in touch with the forward air controller, and made my run in with my wingman. On the first pass, we each dropped one bomb. On our second pass, my wingman dropped his, but I couldn’t get mine off. I tried the manual release, and that was no luck either.”

As Yogi brought the Corsair in for a landing at his base, the bomb came loose when his gear touched, bounced off the runway into the tail of the Corsair, and exploded, nearly cutting his airplane in two. The photo at right shows the dramatic remains of Irwin’s Corsair.