The simulation cockpits this firm produces are constructed of nearly 50% flight-worthy parts. Meaning, the majority of parts you’ll see in a simulation-ready cockpit are the exact same parts you’ll see in one they throw the keys to you and tell you to start it. Each part must be built to exact mil-spec requirements, down 1/1000th of an inch. Think that’s a little over-the-top for training hardware? Not according to Steve Joyner, the principal machinist in charge of the final assembly of cockpits like the Block 52 F-16 we were standing next to. When asked about the degree of detail, he firmly stated, “You put wings on this thing, and she’ll fly.”

Joyner doesn’t regard his work as merely a paycheck but a real and lasting contribution to his nation’s security.“Think about it,” he said, “I want these guys trained in something that’s as close to the real thing as you can get. If that guy’s in the air and someone’s dogging him man, I want him to win.” This was the attitude of everyone with whom we came in contact. They accept nothing less than excellence and as you can see from the pictures, their determination shows. Miller has his reasons, and the biggest is referred to as “negative training”. “This is when a pilot has been trained in a simulator that is not exact in its detail and he becomes accustomed to doing something or reaching for something that won’t be duplicated in a real aircraft.” He explains, “We want the guy in the pilot’s seat to have everything in front of him to be accurate while in practice so that when he does it for real, it’s like he can do it blindfolded.”

They related a story from an F-16 driver recently returned from Iraq. He’d practiced a mission nearly 75 times in a mission rehearsal trainer built here before he went ‘wheels-up’. His heart rate, blood pressure, and vital signs were nearly normal during the entire mission. Using DOD software in conjunction with the simulation cockpit, he told them that the city streets down to the placement of trash dumpsters were nearly exact. This gave the pilot the needed edge to deliver the ordnance on target, the only difference being that unfriendly people were really shooting at him this time. Clark’s has experience in this kind of accuracy. They are the primary contractor that builds the boresight calibration mechanism that is used to zero in the weapons delivery system of the actual F-16. The next time you’re in Falcon 4.0 Allied Force and you go in for a gun kill, be sure to say thank you to B.J. Clark. 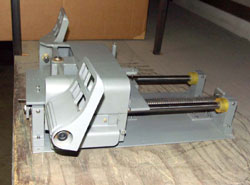 I was directed to a set of rudder pedals on the shelf. Notice the very substantial metal plate reinforcing it over the top.

There’s a reason it’s there. A pilot of Chad Hennings dimensions (a former Air Force Academy grad playing for the Dallas Cowboys) using one of the simulation cockpits had bent the rudder pedals on a rough landing, necessitating the thick metal. This gives the pedal assembly more tolerance to those of us with NFL-regulation leg strength.

Enough, you say. Get to the good stuff, already. We were led to another building, this one virtually deserted. Walking past rows of heavy milling equipment easily worth millions, Miller told us that unless this new venture into selling high-end cockpits to the public worked out, he would be forced to pursue other industries as clients, namely energy companies. “We used to have two shifts, nearly 70 people, working on this stuff.” Miller said as he gestured to the idle equipment. Like most small firms that subcontract with major defense industries, they cling to the hope that more units will be procured instead of reading about cutbacks.

“You guys ready?” Miller asked, a childlike grin on his face, “Let’s go in.” He opened the door and at one end of the room sat the top half of a Boeing/McDonnell-Douglas F/A-18E cockpit. I had but one thought:

Now I know why the DOD shops here. 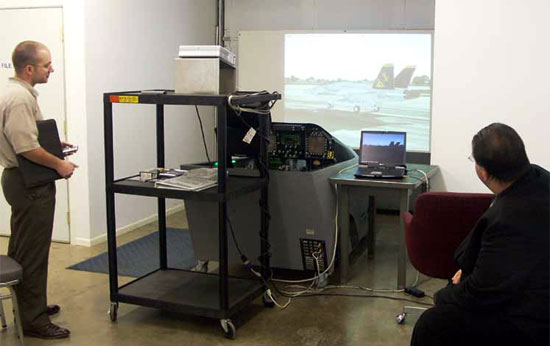