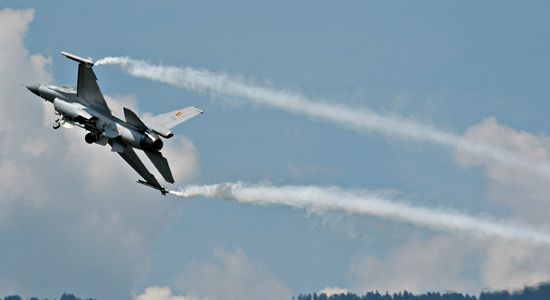 If There Ever Was…

…a historically significant time to hold an air show here in Austria, it clearly had to be this year. In total count, there was not one, not two, but actually three fifty-year jubilees waiting to be celebrated.

Firstly, half a century ago the foreign ministers of the US, UK, FR, UDSSR as well as Austria’s foreign minister signed a document that should become known as “Staatsvertrag”. It granted my nation independence as a sovereign nation again after ten years of occupation following WW2. “Österreich ist frei” — Austria was free again.

Secondly, with this document signed the burden of military self-defense also fell back to the Austrians themselves, and as a result the so called “Bundesheer” was formed, including an initially very small aviation contingent. For this reason, 2005 marks the 50th Birthday of what eventually should become the Austrian Air Force.

And thirdly… no, wait, I’ll let you in on the third fifty year anniversary later…

At any rate, our “Bundesheer” was not going to pass up these memorable days silently, and so they, together with the well-known energy drink company Red Bull set out to hold one of Europe’s biggest air shows again, expecting up to 250.000 visitors in two days, each day with 10 hours of flying display program and about 220 airplanes from 20 different nations participating. And all this without any entry fee! With a bit of luck and some help from SimHQ I was able to gain access for 6 days at this massive event to cover it for our readers.

Head over to page two to see exactly what aviation lovers around the world expected — and got delivered — on this memorable weekend.