When I reviewed the original Battle of Britain, back in 1999, I stated that the title was almost a classic. In its original form it was very good, almost a classic in many ways. Graphically it was decent, the flight and damage models were above average and it had a campaign that was only surpassed (and in only some ways) by the outstanding campaign in Falcon 4.0. At the time it was among the most immersive and substantial World War 2 flight simulations in existence.

Unfortunately it also suffered from some serious problems, a couple of which led me to give it a near classic rating as opposed to a true classic one. Multiplayer had always been problematic, graphics could range from very good to pretty poor and stability was a problem for a lot of players. The community worked very hard to improve a lot of the problems with the game but for most simmers the title faded to relative obscurity; flown by a dedicated core group but generally taking up dust filled space on most gamers shelves.

About six months ago we heard that Shockwave Productions, in conjunction with GMX Media, started to work with the old Rowan code. Most people know Shockwave from their excellent additions to the CFS series, most notably for the Firepower addition which has garnered both individual and industry praise for taking a mediocre CFS3 simulation and reinventing it as a pretty decent hard core game. Scott Gentile’s group has consistently done amazing things with games, making them visually and technically superior to anything done in the past.

Shockwave has done an amazing job taking current games and either adding to them (like the Wings of Power series or Firepower) or completely reinventing games all together (like Battle of Britain II). Watch in the future as the team starts to rehash the old B17II: The Mighty Eighth code and maybe resurrect another title that had so much potential.

This seems to be a new trend in simming, something that allows for creativity while at the same time cuts down on costs. Games like RB3 have already gotten the redo in past add-ons like Full Canvas Jacket and other games like FS:SDOE have had patches that have reinvented them but the re-release of an old title under new management after complete code redoes is something new and maybe something of the future for the flight sim genre. In a way it isn’t new, Oleg Maddox has reused and re-invented the IL2 code since 1999 with Forgotten Battles, Ace Expansion and Pacific Fighters. Still, this is among the first times a developer has taken previous code, made by another company and has re-released it after heavy modification.

Scott took a crack at the BOB code, and I am sure he wonders some days if he hasn’t bitten off more than he can chew. There have been some pretty decent additions to the code; the work by the Battle of Britain Development Group (BDG) has been very commendable in taking the game to new levels of excellence. Still, even the BDG version 0.99, while improved over the original substantially, looked somewhat dated when compared to updated contemporary titles like CFS2 or IL2:FB.

The team didn’t have a large amount of time to reinvent the wheel with this game. This preview will look at some of the significant changes that have occurred with the game along with some of my initial impressions of the game after about 20 hours of play. Of course you will see some shots of the new cockpits that people have been pining for. I wouldn’t let you all miss out on those.

Battle of Britain II revisits the event that some consider the pivotal event in the Second World War, the fight for control of the air over the British Isles in September of 1940. While the true ramifications of the war were definitely up for debate there is little doubt that the British resolve, and the setbacks they inflicted on the Luftwaffe, represented the first true loss the Nazi hierarchy had seen since rising to power in 1933.

In August of 1940 Great Britain literally stood alone against the power of Nazi Germany. Hitler’s forces had conquered Poland, Belgium, Norway, Holland and France en route to controlling almost the entire portion of Western Europe. Only the island of Great Britain and her commonwealth stood between total control of Europe. Most people, to include a large portion of the English population, doubted that the Brits could hold out for long against the Axis forces.

To land forces on British soil the Germans needed to control the air. Controlling the air meant that the powerful Royal Navy could be kept at bay while the Wehrmacht rolled up the limited British forces. To do this though meant that the Luftwaffe had to wrestle control of the air from the RAF, who was bloodied but unbeaten after the Battle of France. 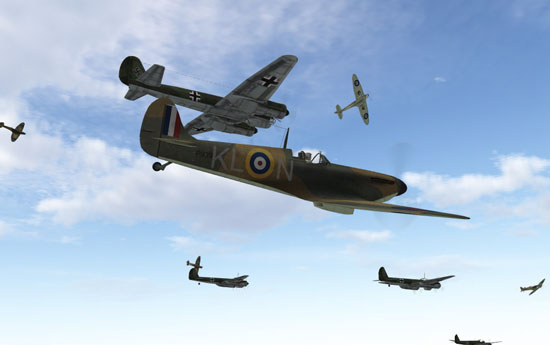 Battle of Britain II simulates the series of air battles that were fought over the skies of England. The battle generally is considered to have gone through three phases.

The first phase, known as the channel phase, involved limited German attacks against channel shipping in the hopes of luring the RAF out into a battle of attrition. In general this didn’t happen. Air Marshall Hugh Dowding smelled out the German tactic and kept his limited supply of Hurricanes and Spitfires (and more importantly his pilots) under tight control and out of dogfights over the channel. Goering had to change his tactics.