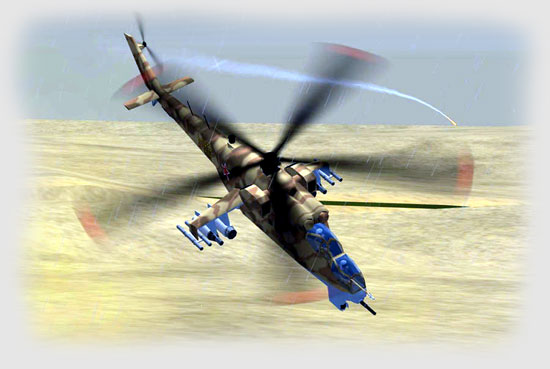 If you are a veteran of combat flight simulations you have no doubt heard of Razorwork’s two spectacular titles:Enemy Engaged: Apache Havoc (EEAH) and Enemy Engaged: Comanche Hokum (EECH). Released in October 1999 and April 2000 respectively, they are still regarded among the best combat flight sims ever made. As evidenced by the success and continued fan support of titles like Total Air War, sims based on speculation about how their real word counterparts work have garnered wide support. The fact that the Comanche program was canceled in early 2004 in no way diminishes the suspension of disbelief that you are flying the next generation of combat attack helicopters. Over five years after the release of EECH, the title continues to evolve due to the dedicated work of modders and an enthusiastic fan base.

Of course it must be remembered that modifying EECH to make it better is a bit like taking Charlize Theron out of jeans and putting her into a nice dress; the former wasn’t too shabby to start with! One of the nice things about the EE series is that they came out of the box in good form, with only minor issues having to be addressed by subsequent patches. Once the official patches were released and the title started to age, Razorworks did one of the greatest things ever for the flight simulation community by releasing the source code and allowing for community modification. This has resulted in continual expansion, modification and improvement over the years and for those that haven’t revisited (Re-Engaged!) the sim in awhile, great progress has been made by the small group of modders that have tackled the job.

First we’ll take a look at some side by side comparisons between the old and the new. Remember that EEAH integrates into EECH to allow owners of both programs to fly the Apache and Havoc within the framework of EECH, including the theaters that originally shipped with EEAH. The most obvious visual evidence of the evolution of EECH comes in the form of upgraded terrain graphics, skins, and cockpits. Rocky and Polak have done an outstanding job with upgrading the terrain visuals in EECH. Here we see the same view of the Georgia theater with old terrain (left) and new terrain (right).

In addition to the new terrain textures the modders have allowed for users with high end systems to push the distance out that terrain and objects are drawn (high LOD). With the LOD set to high, buildings and objects appear further out on the horizon, the number and density of objects is increased, and the distance at which detail is rendered is increased. This setting has a dramatic effect on system performance however, making it a good mod for high end computer users. Here we see a view of Damascus on the Lebanon map with the old and new settings.

The terrains are becoming much more theater specific with everything from arctic tundra to rolling green hills. The sensation of speed and altitude are translated much more effectively with the new terrains when compared with the old, relatively featureless terrain we used to fly over. This shot is of the same hill in the Taiwan theater with old and new terrain palettes.

With the new terrains and theaters come new paint schemes for vehicles and helicopters. The new camouflage looks outstanding and really helps blend the vehicles and aircraft into the landscape. Here is the old, relatively bland paint scheme and one of the new, improved skins.

The panels for the flyable helicopters have been upgraded as well. They have been updated to clean up the fuzzy look of the text and are generally much cleaner and sharper than their predecessors.

Delving further into the cockpit we can see that the modders have added the ability to put different textures and color palettes on the multi-function map display. Where before there were only contour lines we now have shaded terrain contours which greatly increases the comprehension of the terrain around you. Also note again the increased sharpness of the text around the MFD.