Mark: This will be the first time a Recon career will be available in Forgotten Battles. What can a player expect flying this career? Will successful recon missions have an effect on the campaign?

Ian: The first thing is that the player can expect to fly alone or in a pair — no more big patrols. He will have to rely on speed and ability and a good measure of luck to live, choosing at some points perhaps to turn for home if the objective appears too heavily defended. He must expect to have to look around a little for the headquarters or artillery position, which makes it worth mentioning that the player should always choose a high rank in this career if he is to avoid getting yelled at. Successful recon missions allow DGen to route strike flights at the known targets.

The recon career is dangerous and under full real conditions with no navigation aids it is quite a challenge.

Mark: What can you tell us about the custom weather for Kurland? 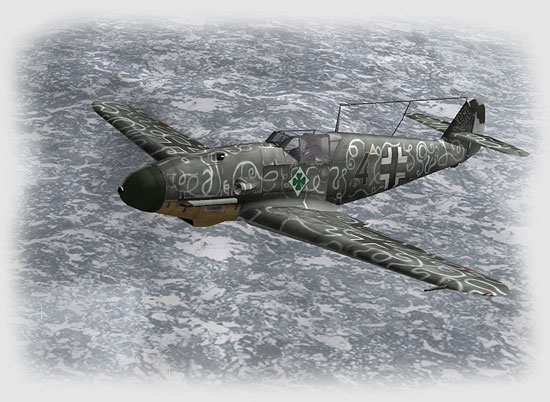 Mark: Why is the ability to set the player starting base so important?

Ian: It’s absolutely at the heart of this new version of DGen. Before, the player would start at a random red or blue base within range of some targets. However when researching Murmansk it became clear that in order to properly portray the activities of the RAF 151 Wing, we couldn’t have them starting just anywhere — they had to be at Vayenga. Equally, with such a huge map, we had to make sure that the German fighters would start from Petsamo. Starting at Ivalo would barely have given them enough fuel to reach their targets. It means that pilots flying, for example, for the Soviet Northern Fleet Naval airforce would be near the coast, protecting the port and convoys.

This was still more important at Kurland. Using this feature, JG54 will start at Riga and then retire with Army Group North into the Kurland pocket. JG51 start in Lithuania and retreat with Army Group Centre through East Prussia towards Königsberg. Clearly, having random bases would have mean we lost the historical basis for the campaign and JG54 might have found themselves with the main body of the German Army instead of defending the peninsula. It would have felt all wrong.

What we have instead is the ability to place units by placing the aircraft they flew, allowing players to immerse themselves in historical yet dynamic campaigns.

It also allows greater variety. In Kurland, for example, we used different IL-2 models for the KBF and Army Sturmoviks, allowing the player to play through the campaign twice flying from different bases, encountering different targets etc. This adds greatly to replayability. Equally, Lavochkin fighters will operate from different bases to Yak fighters and pilots will see parked Lavochkins (or Yaks) at their base, instead of a random collection of aircraft.

Incidentally, Vadim (Starshoy) added this feature as the default for Kurland and Murmansk at our request but it can now be used on other maps by using the “UseParkedPlanes=1” line in the “conf.ini”. This adds a lot to new campaigns written with this in mind.