object. One that would jump immediately to wherever “cool” things were happening. Sometimes, the cool camera would focus on a plane executing an impressive evasive action to shake the enemy. Sometimes, the camera would follow a bomb from the bay of a B-17, down to the ground in a cool tracking shot where you watched the Earth come rushing up at the camera. Sometimes, the cool cam would focus on a firefight, or on a plane that just got shot down, and was now a fireball, barreling toward the ground at terrific speed.”

“Brand” said he wanted to scream, “That doesn’t help us! We’ve got real issues, and you’re screwing around with the camera!”

At one of the next meetings with studio execs sharpening their questions and their money axes, Kawahito turned to the CoolCam. “One of the execs threw out a tough question, designed to show how far over budget we were. “Tom” put down the joystick, and hit the “cool cam” button. Then he turned around to answer the question. While he was answering the question, every eye in the room was on the screen as one amazing scene showed after another. I looked at the execs, and I swear, some of them were gaping. No one was listening to Tom as he answered the question, and when he finished, he picked up the joystick, and jumped back into the game.”

The money problem eased up. More programmers were hired. Meetings with execs “dwindled to nothing”. Finally, ” … we shipped a hell of a game.” The CoolCam did it. “I swear, that camera saved the project,” “Brand” said. As he pointed out, years later people still buy and play this game. And hit F-12 to watch the CoolCam. 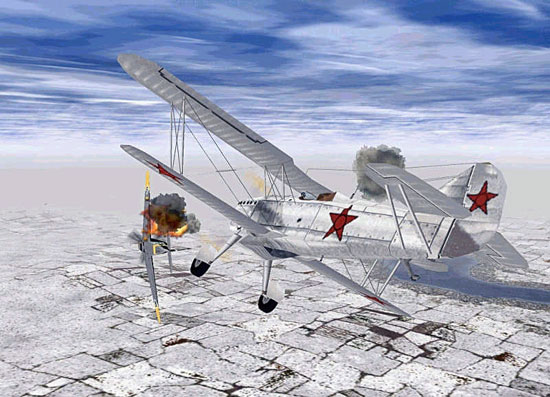 After the Ball is Over, After the Crowds Have Gone

Times weren’t tough, but the competition was in 1998. Not only were new and better graphics coming on fast as the Millennium approached and then passed into the present day. The buying crowds of 1999 and 2000 turned to modern sims with jet fighters, helicopters, ground fighting and electronic warfare. MicroProse released Falcon 4.0 about the same time as EAW. It, too, remains a “classic”. Flight simmers also turned to the “details.”

Microsoft’s Combat Flight Simulator appealed to those who wanted to fly “the real thing” and not just hop into a cockpit and shoot ’em up arcade style. CFS demanded everything be authentic, from the cockpit instruments and controls to the sounds and the airports. CFS’ers sneer at anything less. It is said you can learn to actually fly on a Microsoft Flight Simulator and I believe it. It is used regularly in flight schools, I am told.

Frankly, you can’t even read the instruments clearly in most EAW cockpits. Only a few dedicated modders slaved in their graphics programs to sharpen them up. The problem is simply that EAW was designed for 640×480 graphics. The “sheet of paper” the graphics modder has to work with is surprisingly small. It’s built into the .exe, and only great understanding by a good programmer with the source code is going to change it. EAW was designed in an era when computer speeds were much lower, memory and hard drive space was still a premium, to say nothing of the load on graphics cards. Cut it to a minimum was the theme, so more computer users can play. It still hurts — or helps. But as one reviewer explained, “Most combat pilots said they didn’t even look at their instruments in a dogfight. They paid attention to their enemy and the sound of their engines.”

Eric McCann wrote as late as May, 2003 in VideoGamesReview.com that EAW’s gameplay was “GREAT, and easily the most accessible WWII combat sim out there. I’ve played most of the others, which either spent too much time on the “Sim” part (take off? Don’t just start the engine, adjust your magneto, your fuel flow, flaps, blah blah blah) or went too far the other way into an unrealistic “arcade” mode.”

Well, you do have to start your engine in EAW. Or use “A” for Autopilot. Then advance the throttle and take your brakes off. And don’t forget to raise your landing gear. Sigh. So complicated. Jump to “Instant Action”. In truth, plenty of details and adjustments are available by editing EAW’s “.ini” section. So many that most players never learn to use them.

The combat sim that blew EAW away completely as far as general popularity goes was IL-2 Sturmovik and especially its follow-ups, IL-2 Forgotten Battles and Pacific Fighters. The stunning graphic details on aircraft, the actual motion of elevators and ailerons, the evident damage that appears on your aircraft when you get hit, all made the blocky polygons of EAW look outmoded. But IL-2’s fly very much like their real cousins. That can mean mixtures, prop angle, aircraft trim, etc. And they demand the best in high-speed gameplay machines and video cards or you are watching a slideshow.