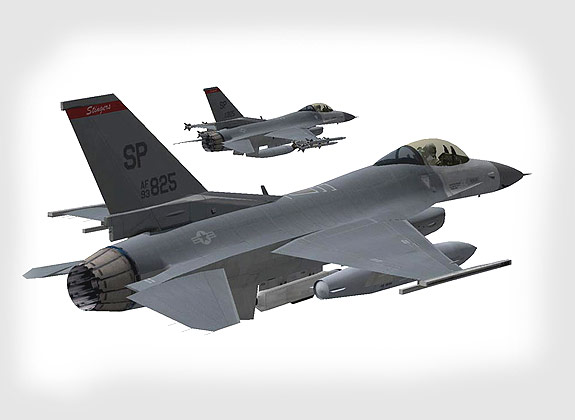 Much has already been written about the incredible artificial intelligence (AI) that is the foundation of offline flying in Falcon 4.0: Allied Force. With the wide diversity of missions, roles, platforms and nationalities, it is no wonder that glitches exist in the AI, but for the most part I have seen very credible performance in the campaigns. One of the most exciting features of F4:AF however, is the stability of the multiplayer features.

My multiplayer experience has been limited to a few flights in Aces High, Longbow 2, EECH in the recent past, and a good number of hours playing EF2000 many years ago. Now that I have experienced F4 in multiplayer mode though, it will be hard to go back to flying alone against the combined forces of the AI enemy.

Our testing revealed that the multiplayer code in F4:AF is rock solid. Once connected, we were able to fly with our three testers with relatively few problems, which we will note later. The caveat however, is that the initial learning curve for learning how to connect was fairly steep. The most difficult part of F4:AF multiplayer is going to be learning the process to actually arrive at a connection.

To be blunt, hooking into a multiplayer game was a pain in the rear for me. For the uninitiated I fear that this may actually be a total show stopper and the less than dedicated online flier may not want to bother with the effort.

I agree with Tom’s comments, although with an expanding knowledge base and community help it is becoming faster and easier to figure out the process. In this day and age of instant online connectivity for more modern games it can be argued that F4 remains a dinosaur with regards to multiplayer setup requirements. Specifically, if you connect to the Internet through a router you will likely be required to make changes to your router settings in order to allow F4 to send and receive data to the online multiplayer server you are hooking up to. I was a complete rookie at this and thanks to some helpful community members I was able to figure out the process in practice if not in theory.

I’m generally extremely leery about messing with my Internet settings on my home network. Too often I’ve blundered the wrong way and lost my connection without much of a clue as to how to get it back. My first recommendation before attempting any changes is to note your current settings (with everything working) for both your Windows network configuration and your router configuration. A useful way of capturing these settings is to use a screen shot utility to take snapshots of your configuration pages so that you can refer to them later in case you need to back up a step.

In order to allow for data transfer through a router, F4 requires you to open two “ports” on your router. These ports are 2934 and 2935 UDP. If you do not know how to make configuration changes to your router I highly suggest you visit this specialized web site that will help you configure your specific make and model of router. As a total newbie to router configurations I found the site invaluable and after tinkering with my own routers settings I was finally able to successfully connect to an F4 server.